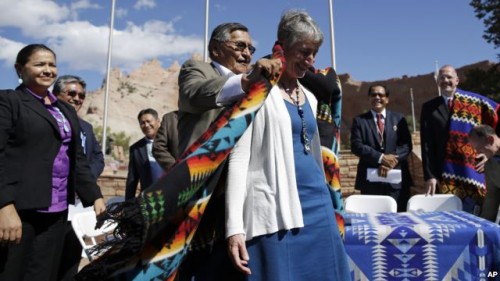 Navajo Nation President Ben Shelly (L) puts a blanket on the shoulders of U.S. Interior Secretary Sally Jewell after a ceremonial signing of a record multi-million-dollar settlement, in Window Rock, Arizona, at the Navajo Nation, Sept. 26, 2014.

By Isabela Cocoli, Voice of America News
WASHINGTON—A record multi-million-dollar settlement between the United States government and the Navajo Nation has been seen as a turning point in relations between the Federal government and the entire Indian nation. It is the largest sum ever paid by the U.S. government to a single Indian tribe.Within the territory of the United States are 562 nations — ethnically-, culturally- and linguistically-diverse Native American tribes recognized by the United States as sovereign governments. The largest is the Navajo Nation, whose territory stretches more than 70,000 square kilometers across three western states.While the tribal governments enforce laws on their territory and license and regulate activities, the federal government holds the vast majority of Indian lands, money and resources in trust for the tribes, and is required to manage them in a way that benefits the tribes and individual Native Americans.

The Navajo Nation sued the federal government in 2006 and sought $900 million in damages for mismanagement of resources and trust accounts since at least 1946.

The claims in the case involved essentially three things: one, the Federal government as trustee was responsible for negotiating a contract for the extraction of natural resources for the Navajo Nation’s property; two, the government was responsible for monitoring the performance under the contract to make sure that the Navajo Nation was paid the royalties due; and three, as trustee the United States was obligated to invest the proceeds in a commercially appropriate way.

Andrew Sandler, who represented the Navajo Nation in the suit, said the settlement for $554 million is an equitable deal for both parties. It comes at a time when the Navajo Nation needs significant investment in several areas — from education to housing — and he said it will go a long way toward addressing those needs.

“The Navajo Nation is plagued by an unemployment rate as high as 50 percent. It is in desperate need for educational resources, for infrastructure resources, for roads, for water, and many other things,” said Sandler. “This $500-plus million will go a long, long way to improving the quality of life for the Navajo people.”

The signing ceremony took place late last month in Window Rock, Arizona, which serves as the capital of the Navajo Nation. Navajo official Rick Abasta told VOA that there were compromises on both sides.

“There was a little bit of compromise on the Nation’s part in accepting this $554 million settlement. But I think the bigger picture was to end the litigation against the federal government, because of course that has a cost as well, and move forward with improving the Nation and utilizing these funds,” he said.

In various public statements, U.S. officials had acknowledged that the Federal government had failed in its obligation as trustee. However, the deal reflects Washington’s commitment to upholding its trust responsibility to Indian Country and to building strong, prosperous and resilient tribal communities.

Navajo Nation President Ben Shelly said the agreement was symbolic of the evolving relationship between the Navajo Nation and the U.S. government.

“The $554 million represented in this settlement is more than just the end of a legal battle. It is not just fulfilling the trust responsibility of our trustee, nor is it full compensation for the loss of revenue and the harm caused by the federal government’s actions over decades,” he said. “This settlement marks a turning point in our relationship with the federal government, and I’m hoping to see that before Obama leaves.”

U.S. tribes have filed more than 100 lawsuits against the federal government. Since early 2012, the government has resolved about 80 of them, amounting to $2.5 billion.