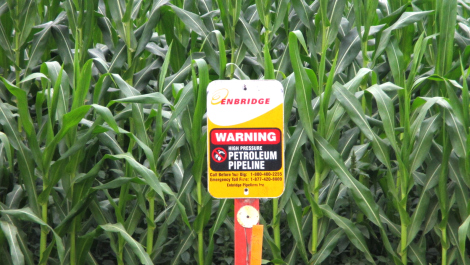 This morning, a group of protesters drove through the farm country of Kitchener, Ontario. They pulled up at a dirt-and-gravel-paved job site occupied by a security guard.

The guard knew the drill. While he phoned everyone who normally reported to the job site to tell them not to come in to work that day, the protesters set up camp. They posted a statement on Tumblr, inviting any interested parties to come and join them, along with guidelines for the occupation:

Here are some things to keep in mind while visiting the Dam Line 9 Action:

– Have fun, but also remember that this is a site of struggle.

All summer, protesters have been appearing at job sites along the path of Line 9 — a pipeline that had lived in obscurity until the regulatory limbo surrounding the approval of Keystone XL made it famous. Enbridge, the Canadian company that owns Line 9, announced plans to expand it and to reverse its flow. Normally the pipe carries crude from Africa and the Middle East into Canada’s heart; Enbridge would like it to move oil from the Alberta tar sands to Quebec, where it could be refined and exported.

Line 9 is 38 years old, and crosses the path of every river that drains into Lake Ontario. But because it was already in the ground, it didn’t require the same standards of approval that a new pipeline would. The reversal was approved by Canada’s National Energy Board (NEB) last March, after several months of contentious public hearings, which adhered to a newly developed rule that required anyone who wanted to make a public comment to submit a 10-page application for approval first.

One of the protesters, Dan Kellar, was working on a PhD in environmental impact assessment and the application of environmental laws, so he was able to navigate the application process well enough to submit a comment, along with a group called Grand River Indigenous Solidarity. The NEB, unswayed, approve the pipeline anyway.

Then something unexpected happened. In June, the NEB ruled that the Chippewas of the Thames First Nation had not been adequately consulted on the portion of Line 9 that passed through their territory, which meant that they had the right to appeal the expansion. This was one of several rulings in the last few months that have greatly expanded First Nations power over what happens on Canadian soil.

Still, while the appeal works its way through the system, the NEB has allowed the retrofit  to continue. That’s why the protests at various sites along the retrofit’s pathway have continued, too.

In this latest case, the work being stopped is a valve replacement, but most of the projects that the protesters have interrupted have been “integrity digs” — areas where Enbridge has dug up a section of the pipeline to check it for leaks.

Most of the occupations last for a few days, according to Rachel Avery, one of the protesters at the site. In this case, police told the protesters that they would be checking in on the site at 6 p.m., but gave no word as to whether they had plans to arrest anyone.

In the meantime, says Avery, there’s lots of stuff to do, like set up tents and shade structures, and install solar panels. There’s also plenty of time to  educate curious passers-by about the hydrology of the local watershed.

That’s what the call-out to visit on Tumblr was about — kind of like a consciousness-raising group, but under threat of arrest. Why not turn your site occupation into an educational opportunity? It’s just another way, says Avery, “to build a stronger movement.”

As this report went to press, the protesters had settled in for a frisbee match. 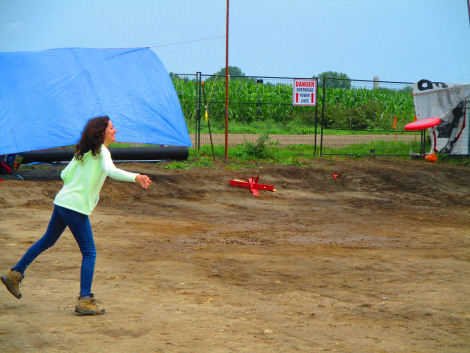