The remains of a young boy, ceremonially buried some 12,600 years ago in Montana, have revealed the ancestry of one of the earliest populations in the Americas, known as the Clovis culture.

Published in this issue of Nature, the boy’s genome sequence shows that today’s indi­genous groups spanning North and South America are all descended from a single population that trekked across the Bering land bridge from Asia (M. Rasmussen et al. Nature 506, 225–229; 2014). The analysis also points to an early split between the ancestors of the Clovis people and a second group, whose DNA lives on in populations in Canada and Greenland (see page 162).

But the research underscores the ethical minefield of studying ancient Native American remains, and rekindles memories of a bruising legal fight over a different human skeleton in the 1990s.

To avoid such a controversy, Eske Willerslev, a palaeobiologist at the University of Copenhagen who led the latest study, attempted to involve Native American communities. And so he embarked on a tour of Montana’s Indian reservations last year, talking to community members to explain his work and seek their support. “I didn’t want a situation where the first time they heard about this study was when it’s published,” he says. 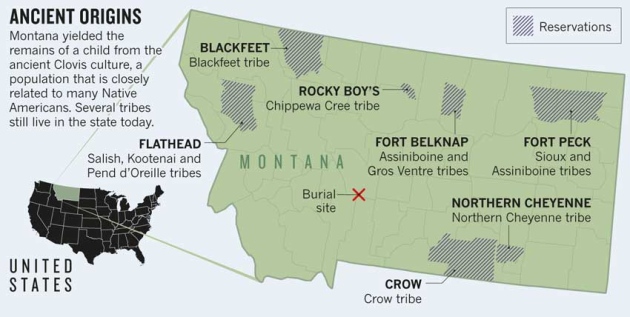 Source: Montana Office of Public Instruction.
Construction workers discovered the Clovis burial site on a private ranch near the small town of Wilsall in May 1968 (see ‘Ancient origins’). About 100 stone and bone artefacts, as well as bone fragments from a male child aged under two, were subsequently recovered.

The boy’s bones were found to date to the end of the Clovis culture, which flourished in the central and western United States between about 13,000 and 12,600 years ago. Carved elk bones found with the boy’s remains were hundreds of years older, suggesting that they were heirlooms. The ranch, owned by Melvyn and Helen Anzick, is the only site yet discovered at which Clovis objects exist alongside human bones. Most of the artefacts now reside in a museum, but researchers returned the human remains to the Anzick family in the late 1990s.

At that time, the Anzicks’ daughter, Sarah, was conducting cancer and genome research at the National Institutes of Health in Bethesda, Maryland, and thought about sequencing genetic material from the bones. But she was wary of stoking a similar debate to the one surrounding Kennewick Man, a human skeleton found on the banks of the Columbia River in Kennewick, Washington, in July 1996. Its discovery sparked an eight-year legal battle between Native American tribes, who claimed that they were culturally connected to the individual, and researchers, who said that the roughly 9,000-year-old remains pre-dated the tribes.

The US government sided with the tribes, citing the federal Native American Graves Protection and Repatriation Act (NAGPRA). The act requires that human remains discovered on federal lands — as Kennewick Man was — are returned to affiliated tribes for reburial. But a court ruled that the law did not apply, largely because of the age of the remains, and ordered that Kennewick Man be stored away from public view in a museum.

Sarah Anzick sought the advice of local tribes over the Clovis boy, but she could not reach a consensus with the tribes on what to do. She gave up on the idea, stored the bones in a safe location and got on with her other research.

In 2009, archaeologist Michael Waters, of Texas A&M University in College Station, contacted Anzick with the idea of sending the remains to Willerslev’s lab. (In early 2010, the lab published one of the first genome sequences of an ancient human, a 4,000-year-old resident of Greenland; see M. Rasmussen et al. Nature 463, 757–762; 2010.) “I said, ‘I will allow you guys to do this, but I want to be involved,’” recalls Anzick, who has published more than a dozen papers in leading journals.

In Copenhagen, she extracted DNA from fragments of the boy’s skull ready for mitochondrial genome sequencing, which offers a snapshot of a person’s maternal ancestry. Back in Montana months later, she received the sequencing data and discovered that the genome’s closest match was to present-day Native Americans. “My heart just stopped,” she says.

After Willerslev’s team confirmed the link by sequencing the boy’s nuclear genome (a more detailed indicator of ancestry), Willerslev sought advice from an agency that handles reburial issues. He was told that, because the remains were found on private land, NAGPRA did not apply and no consultation was needed. Despite this, Willerslev made his own attempt to consult local tribes. This led to a meeting in September at the burial site, with Anzick, Willerslev and their co-author Shane Doyle, who works in Native American studies at Montana State University in Bozeman, and is a member of the Crow tribe.

“That place is very special to me, that’s my ancestral homeland.”

“That place is very special to me, that’s my ancestral homeland,” says Doyle. He told Willerslev and Anzick that they should rebury the child where he was found. “I think you need to put the little boy back where his parents left him,” Doyle recalls telling them.

Doyle and Willerslev then set off on a 1,500-kilometre road trip to meet representatives of four Montana tribes; Doyle later consulted another five. Many of the people they talked to had few problems with the research, Doyle says, but some would have preferred to have been consulted before the study started, and not years after.

Willerslev says that researchers studying early American remains should assume that they are related to contemporary groups, and involve them as early as possible. But it is not always clear whom to contact, he adds, particularly when remains are related to groups spread across the Americas. “We have to engage with Native Americans, but how you deal with that question in practice is not an easy thing,” he says.

Hank Greely, a legal scholar at Stanford University in California who is interested in the legal and ethical issues of human genetics, commends the approach of Willerslev’s team. But he says that there is no single solution to involving Native American communities in such research. “You’re looking to try to talk to the people who might be most invested in, or connected with, particular sets of remains,” he advises.

Dennis O’Rourke, a geneticist at the University of Utah in Salt Lake City, who studies ancient DNA from populations native to the islands around Alaska, notes that indigenous groups have varying concerns: some want remains reburied, others do not, for instance.

The Montana tribes overwhelmingly wanted the Clovis boy’s bones interred. Plans for a reburial ceremony, possibly at an undisclosed site, are now being hashed out, with the Crow Nation playing a lead role. It is expected to take place in the spring, after the ground thaws.

About 12,600 years ago, when ice sheets still covered parts of North America, a baby boy lived, died and was buried in a rocky grave in a field in western Montana.

A new whole genome sequencing of this infant — the oldest genome sequence of an American individual — identifies his community as ancestors of Native Americans who live on the continent today.

“We found the genome of this boy is more closely related to Native Americans today than to any other peoples anywhere else,” Eske Willlerslev, of the University of Copenhagen, who led an international team on this study published in the Thursday issue of Nature, told reporters during a teleconference.

The new study adds to archaeological evidence that Native Americans are descendants of humans that migrated from Asia through Siberia, and thrived across North America 13,000 years ago. 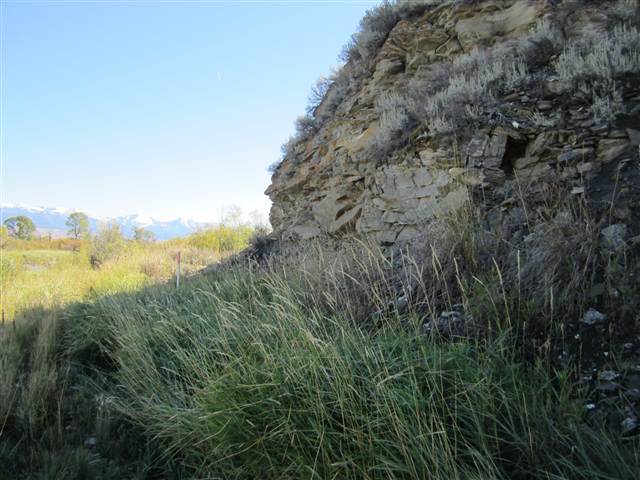 MIKE WATERS
At the Anzick site, a pole marks location where the burial was found.

The infant boy was discovered in 1968 by construction crews on private property belonging to the Anzick family. He was named Anzick-1, and identified as a member of the ancient Clovis people — a group that appeared between 13,000 and 12,600 years ago, and crafted strikingly distinctive spear tips made from stone.

The first of those stone tools were discovered in Clovis, New Mexico, but then unearthed all across North America. But these tools seem to be all this that this group left behind.

Because the “Clovis points” are so similar to the flint tools found at the Solutré site in France, dating back to about the same time, some researchers have proposed that the Clovis — and ancestors of Native Americans — were Europeans who migrated across the Atlantic from Europe.

But Anzick-1’s genome analysis supports a different theory: His ancestors came from Asia, and travelled into North America through Siberia. “The boy is part of a larger story,” Michael Waters, a geoarchaeologist at the Texas A&M University, and a member of the crew, said during the teleconference,

“The Anzick family is directly ancestral to so many peoples in the Americas. That is astonishing,” Willerslev said. 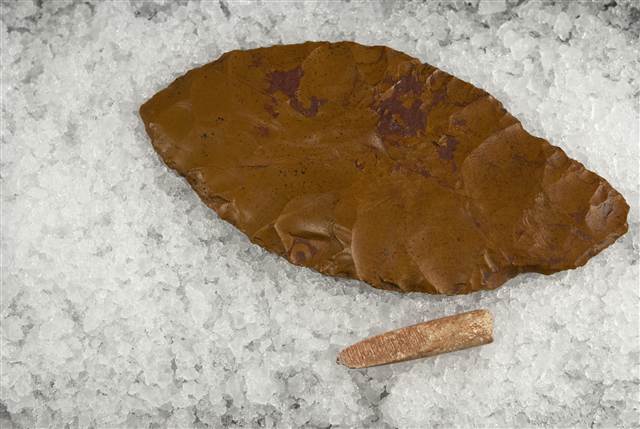 SARAH ANZICK
A large biface made of brown chert along with the beveled end of an osseous rod.

“I think it’s highly significant piece of work,” John Johnson, curator of anthropology at the Santa Barbara Museum of Natural History, told NBC News. Johnson, who was not involved with the work, added that “There is a need for continued sampling of living Native Americans to get a more complete look at genetic diversity.”

Sarah Anzick, who was a young girl when the Clovis boy was discovered on her family property, traveled to Copenhagen and contributed to the research. “This has been a labor of love for me and been done outside of my day job and separate from my professional career,” Anzick, who is a molecular biologist at the Rocky Mountain Labs, said during Tuesday’s teleconference.

Tribes living in Montana have been among the first to know the story told by Anzick-1’s DNA. For the last several months, the Willerslev has traveled through Montana and been sharing the results of his crew’s analysis with members of Native American tribes.

“This discovery confirms that tribes never really doubted,” Shane Doyle, a professor of Native American History at Montana State University who is a co-author on the study and a member of the Crow tribe, said. He’s had conversations with more than 100 members, and the main reaction has been: “We have no reason to doubt that we’ve been here for this long.”

In cooperation with local tribes, the group is planning to return Anzick-1 to his grave, in the late spring of this year.

“This boy has gifted us far more than anyone has every dreamed off, and it’s time to put him to put him to rest again,” Doyle said.