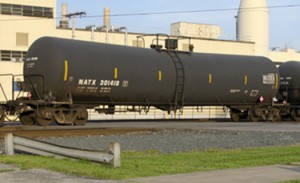 AUBURN, Wash. — The Muckleshoot Indian Tribe has joined with the Affiliated Tribes of Northwest Indians (ATNI) in calling on the United States Food and Drug Administration to deny any application for the introduction of genetically engineered salmon into the United States until a full Environmental Impact Statement (EIS) and further scientific review is completed and formal consultation with Northwest Treaty Tribes undertaken.

AquaBounty, a large Boston-based biotechnology company, has proposed to produce genetically engineered salmon eggs in Canadian waters, ship them to Panama where the engineered salmon would be raised to maturity in inland tanks, then slaughtered and processed in Panama and shipped to the United States for human consumption.

AquaBounty has patented a process whereby the DNA of wild Chinook salmon and an eel-like pout fish are fused and injected into Atlantic salmon. That engineered salmon is said to grow to full size in half the time of a wild fish and, according to AquaBounty, “increase the efficiency of production.”

According to federal guidelines, not only would the genetic engineering process and resultant salmon be owned by a corporation, but the fish would not be labeled as genetically modified so consumers wouldn’t know if they are buying it.

Northwest Tribes share a number of serious concerns about genetically engineered salmon, including the possibility of escape into the wild habitat and competing with wild salmon for food and rearing locations, or inbreeding with wild salmon which could result in the destruction of the species upon which all Indian people of the Pacific Northwest depend. Studies have not ruled out those possible impacts.

“From time immemorial salmon has been central to the culture, religion and society of Northwest Indian people,” said Virginia Cross, Muckleshoot Tribal Council Chair. “Genetically engineered salmon not only threaten our way of life, but could also adversely affect our treaty rights to take fish at our usual and accustomed places.”

In opposing FDA approval, the Muckleshoot Tribe and ATNI cite the precautionary principle, which states that habitat modification should not be undertaken until the full impacts are known and the natural and human environments are protected – and that the burden of proof that it is not harmful falls upon those proposing the action.

“The Coast Salish people have organized their lives around salmon for thousands of years,” said Valerie Segrest, Muckleshoot Tribal member and Native Foods Educator. “We see them as our greatest teachers, giving their lives for us to have life. Corporate ownership of such a cultural keystone is a direct attack on our identity and the legacy our ancestors have left us. Absent indisputable evidence that there is no harm in human consumption, wild fish habitat or the treaty-protected fishing rights of Northwest Indians the FDA must not permit the promised increase of production efficiency to trump sound science or fishing rights and culture of Northwest Indians.” 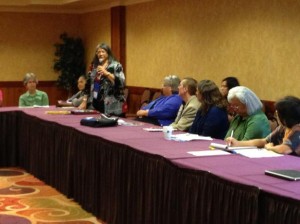 Members representing 40 tribes from across the Northwest region are meeting this week at the Coeur d’ Alene Casino for the 60th Annual Affiliated Tribes of the Northwest Indians Fall Convention. The convention allows the tribes to share tradition while finding a common ground for the future.

It’s a convention that’s still steeped in tradition 60 years after the ATNI was established. In 1953, leaders from the Coeur d’Alene Tribe, Spokane Tribe, Colville Tribe, Yakama Nation and Tulalip Tribe, held the first meeting of the ATNI to discuss the issues of income taxes and how to protect their tribal governments from being disbanded by the U.S. government through the Termination Act.

While the issues being discussed have changed since that initial meeting, the reasons behind joining together are still the same.

“Strength in numbers. That’s completely it,” explained Jamie Sijohn, ATNI Communications Manager. “They can pull together and find a solution for issues that effect them all.”

The founding leaders joined together to protect their rights and to preserve their culture, and in 2013 that’s still the driving force behind ATNI, but the topics of discussion have changed. Tribal members from the 40 tribes are discussing a range of issues during break away sessions. This year’s topics include healthcare, natural resources and megaloads, and inter-tribal trade.

One of the larger issues is the Native Vote, a grassroots movement that is working to get tribal members to register to vote, and to get polling locations on the reservations. Some states do not recognize tribal identification cards as official forms of ID, which blocks natives from registering to vote. Another goal of Native Vote is to provide members with information on candidates that align with the values and concerns of local tribes.

It’s these challenges that Joanna Meninick told the room to face when she addressed the crowd in her native language on Tuesday afternoon. Meninick, who is one of the longest attending members of ATNI, switched to English expressing heartbreak that she has to do so in order to be understood.

“Fight with your native language,” Meninick said, adding that the tribes won’t be heard if they speak the language of Washington, DC. She had one more call to action for her community following the three days of discussion and talk.

“Now do something,” said Meninick.