She spent hours stitching intricate beadwork on the outfits that her husband and kids wore for powwows and other special occasions, and she knew plenty of other Native American families crafting heirloom-quality clothing that would patronize a local supplier. 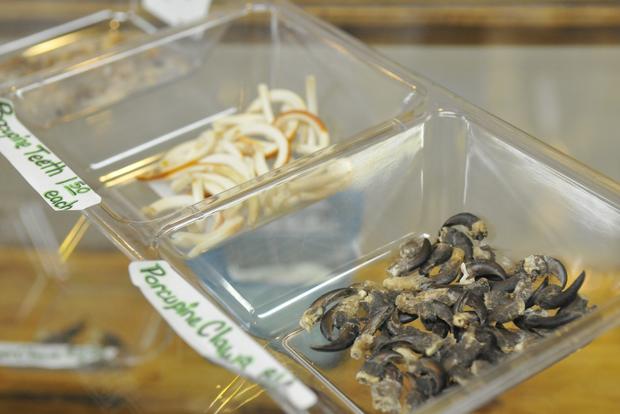 Porcupine teeth and claws are among the variety of natural and manmade items for sale in the Four Shells store.
Jesse Tinsley photo

Four Shells Regalia Supply started out as a small selection of beads tucked into a corner of War Path Tribal Corp., a convenience store, gas station and gift shop that Mahoney, her husband, Pete, and their children run on the Coeur d’Alene Indian Reservation.

Three years ago, the shop expanded into the regalia store that Mahoney had dreamed about. The shop attracts both native and non-native customers, who can spend an hour or more browsing through the inventory and talking about their current projects.

There are stacks of brain-tanned buckskin, deer and elk rawhide, and otter, mink and beaver furs. The display case features elk teeth, porcupine quills, cowrie and dentalium shells. And there are hanks of dyed horsehair, packets of face paint and geometric Indian prints in cotton, fleece and wool.

Four Shell’s biggest draw, however, is the three walls devoted to glittering glass beads, which gives the store a rainbow appearance. The beads are imported from the Czech Republic and end up in the intricate beadwork decorating moccasins, jewelry, chokers and other clothing and accessories. 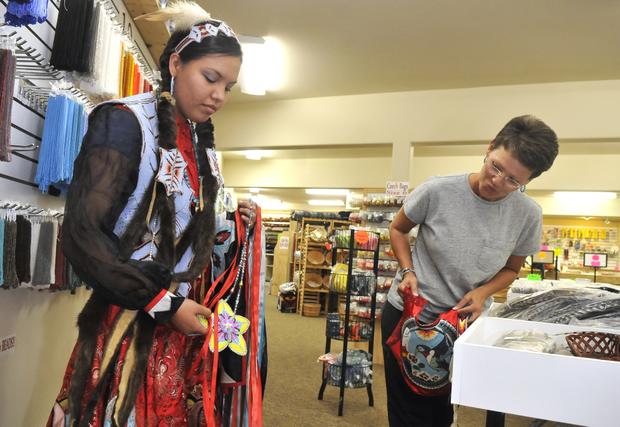 Allyssa Haynes, left, shows Peggy Mahoney her beaded medallion at the Four Shells store in Plummer, Idaho, on Monday. Haynes works at the store, which is run by Mahoney’s family. It is one of the few places where Native American crafters can find almost any material needed for Indian regalia worn at traditional gatherings.
Jesse Tinsley photo

Mahoney, who is Lakota, grew up watching female relatives doing beadwork. “When you are making the items, you put a lot of prayer into them,” she said. “And it’s a way to pass on tradition and culture.”

She said she’s seen a revival of interest in handcrafted regalia in recent years, particularly among the younger generation. One of Four Shell’s clerks, Allyssa Haynes, is already an expert bead worker at 17. Haynes, who will be a high school senior next year, frequently doodles, and her doodles turn into original designs.

“They come this way every year or so, and this is one of their main stops,” said Mona Gonzales, another of Four Shell’s clerks.

Vivian and Pete Williams, of Creston, B.C., were browsing in the shop this week.

Both do beadwork – Pete uses a loom – and they make the 2 ½-hour drive to patronize the store because of its large bead selection, Vivian Williams said.

Jeanne Sijohn Gravatt was also shopping for beads. Gravatt, who lives on the Spokane Reservation, has five orders pending for handcrafted gifts, including cradleboards.

Gravatt said that finding a local bead supplier was one of her top priorities after moving to the area from South Dakota. A friend told her about Four Shells.

Gravatt’s husband, Mark, knows not to interrupt her when she’s lost in thought in the store. Her creative wheels are spinning over color combinations and designs.

Four Shells will be busy with tourist traffic through October. But it’s December through February when the most dedicated customers stroll the aisles. They’ll be busy sewing and beading outfits and accessories for the next powwow season.

“It makes you feel pretty good,” Mahoney said of the store’s popularity. “It wasn’t just my hair-brained idea.”

WASHINGTON – Join the Smithsonian’s National Museum of the American Indian in celebrating its fourth annual Living Earth Festival Friday, July 19, through Sunday, July 21. This year’s festival features live music and dance performances, a Native cooking competition, a film screening, hands on crafts and storytelling for families, an outdoor farmers’ market with local produce and game, a discussion of tribal environmental activism, as well as beading demonstrations and workshops on cheese making and sculpture.

On Saturday at 5:00 pm, this concert in the Potomac Atrium will feature the talents of Quetzal Guerrero, a Latin soul singer, violinist, guitarist, and percussionist, She King, an indie rock outfit from Toronto fronted by Six Nations vocalist Shawnee Talbot, and a performance by GRAMMY award winning artist Ozomatli, a “culture mashing” group whose music embraces influences from hip-hop, salsa, dancehall, cumbia, samba, and funk.

Dinner and a Movie

On Friday evening, the museum’s Mitsitam Native Foods Cafe will offer an a la carte menu from 5 pm to 6:30 pm before the 7 pm screening of Watershed: Exploring a New Water Ethic for the New West in the Rasmuson Theater. Narrated by Robert Redford, the film highlights the lives and thoughts of six individuals living and working in the Colorado River basin and examines the issue of balancing the interests and rights of cities, agriculture, the environment, and Native communities when it comes to water rights. The screening is free, but registration through the NMAI website, is required. Registration does not ensure a seat; seating is on a first come, first served basis. Limited walk up seats will be available on the night of the show.

On Sunday from 10 pm to pm, a farmers market will be open on the museum’s outdoor Welcome Plaza. Local produce and game will be available from Common Good, Coonridge Organic Cheese Farm, Chuck’s Butcher Shop, and more.

On Saturday at 2 pm, Tribal ecoAmbassadors will host a discussion in the Rasmuson Theater on the roles of Native professors and students in addressing environmental issues with a focus on work toward local solutions to preserve public health, reduce carbon footprints, and increase sustainability.

Mary Williams will be demonstrating her Native beadwork, Sunday June 15, 1PM to 2PM at the Tulalip Hibulb Cultural Center. www.hibulbculturalcenter.org 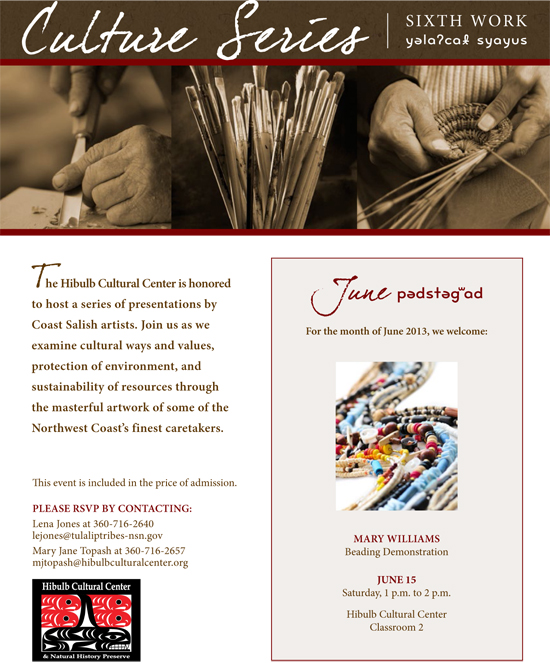