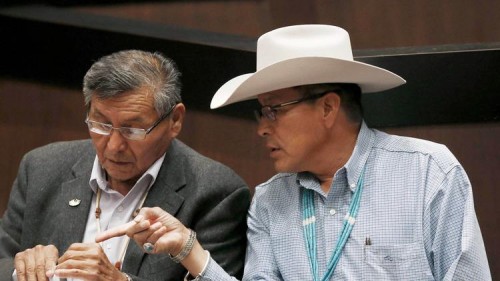 FLAGSTAFF, Ariz. (AP) – Facing a high prevalence of diabetes, many American Indian tribes are returning to their roots with community and home gardens, cooking classes that incorporate traditional foods, and running programs to encourage healthy lifestyles.

The latest effort on the Navajo Nation, the country’s largest reservation, is to use the tax system to spur people to ditch junk food.

A proposed 2 percent sales tax on chips, cookies and sodas failed Tuesday in a Tribal Council vote. But the measure still has widespread support, and advocates plan to revive it, with the hope of making the tribe one of the first governments to enact a junk-food tax.

Elected officials across the U.S. have taken aim at sugary drinks with proposed bans, size limits, tax hikes and warning labels, though their efforts have not gained widespread traction. In Mexico, lawmakers approved a junk food tax and a tax on soft drinks last year as part of that government’s campaign to fight obesity.

Navajo President Ben Shelly earlier this year vetoed measures to establish a junk-food tax and eliminate the tax on fresh fruit and vegetables. At Tuesday’s meeting, tribal lawmakers overturned the veto on the tax cut, but a vote to secure the junk-food tax fell short. Lawmakers voted 13-7 in favor of it, but the tax needed 16 votes to pass.

The Dine Community Advocacy Alliance, which led the effort, said it plans to revise the proposal and bring it before lawmakers again during the summer legislative session.

“We’re going to keep moving on it,’’ group member Gloria Begay said. “It’s not so much the tax money – it’s the message. The message being, ‘Let’s look at our health and make healthier choices.’ We have to go out and do more education awareness.’’

Shelly said he supports the proposal’s intent but questioned how the higher tax on snacks high in fat, sugar and salt would be enacted and regulated. Supporters say the tax is another tool in their fight for the health of the people.

“If we can encourage our people to make healthier choices and work on the prevention side, we increase the life span of our children, we improve their quality of life,’’ said professional golfer Notah Begay III, who is among supporters.

American Indians and Alaska Natives as a whole have the highest age-adjusted prevalence of diabetes among U.S. racial and ethnic groups, according to the American Diabetes Association. They are more than twice as likely as non-Hispanic whites to have the disease that was the fourth leading cause of death in the Navajo area from 2003 to 2005, according to the Indian Health Service.

Native children ages 10 to 19 are nine times as likely to be diagnosed with Type 2 diabetes, the IHS said.

The proposed Navajo Nation tax wouldn’t have added significantly to the price of junk food, but buying food on the reservation presents obstacles that don’t exist in most of urban America. The reservation is a vast 27,000 square miles with few grocery stores and a population with an unemployment rate of around 50 percent. Thousands of people live without electricity and have no way of storing perishable food items for too long.

“They have a tendency to purchase what’s available, and it’s not always the best food,’’ said Leslie Wheelock, director of tribal relations for the U.S. Department of Agriculture.

Wheelock said the diabetes issue in tribal communities is one that has been overlooked in the past or not taken as seriously as it could be. It has roots in the federal government taking over American Indian lands and introducing food that tribal members weren’t used to, she said.

To help remedy that, the USDA runs a program that distributes nutritional food to 276 tribes. Grants from the agency have gone toward gardening lessons for children within the Seneca Nation of Indians in New York, culturally relevant exercise programs for the Spirit Lake Tribe in North Dakota and food demonstrations using fresh fruit and vegetables on the Zuni reservations in New Mexico.

The Dine Community Advocacy Alliance estimated a junk-food tax would result in at least $1 million a year in revenue that could go toward wellness centers, community parks, walking trails and picnic grounds in Navajo communities in Utah, New Mexico and Arizona. It would have expired at the end of 2018.

No other sales tax on the Navajo Nation specifically targets the spending habits of consumers. Alcohol is sold in a few places on the reservation but isn’t taxed. Retailers and distributors pay a tobacco tax.

Opponents of the junk food tax argued it would burden customers and drive revenue off the reservation. Mike Gardner, executive director of the Arizona Beverage Association, said the lack of specifics in the legislation as to what exactly would be taxed could mean fruit juice and nutritional shakes could be lumped in the same category as sodas.

“I don’t think they mean that, but that’s what will happen,’’ Gardner said. “It’s a little loose, a little vague. It’s going to create problems for retailers and … it doesn’t solve the problem.’’

WINDOW ROCK, ARIZONA – On Thursday Navajo Nation President Ben Shelly signed legislation enacting the Navajo Energy Policy of 2013 during a signing ceremony in his office. The policy will allow for the Navajo Nation to have direction and guidance for energy development and other initiatives.

For three years, President Shelly has been advocating to update the Navajo Energy Policy, which was created in 1980.

“I want to thank the Navajo Nation Council for the cooperation and the spirit of working together to pass the energy policy. It’s been a long journey. Much work from both branches of government went into today’s ceremony. Now we can move ahead with our future of renewable and non-renewable energy,”

Navajo Nation President Shelly said before he signed the legislation.

“This is a great day for the Navajo Nation,”

President Shelly said after he signed the documents.

For three years, President Shelly has been advocating to update the Navajo Energy Policy, which was created in 1980. The Energy Advisory Committee that was chaired by Fred White, Natural Resources division director, created the updated Energy Policy and submitted the policy to the Navajo Council to initiate the legislative process.

“I am happy the Council passed the Energy Policy,”

White said shortly after the legislation passed earlier this week.

“a basic framework for which our Nation can work with other entities to effectively use our resources for energy development.”

In addition, President Shelly has stated the Energy Policy puts the Navajo Nation in a better position to advocate for funding from federal sources for energy studies, projects and other programs.

The legislation pertaining to NTEC allocated $4.1 million to the company for costs relating to start up and expenses acquired during the due diligence investigation related to the acquisition of the Navajo mine.

The other legislation amends the operating policies for NTEC.