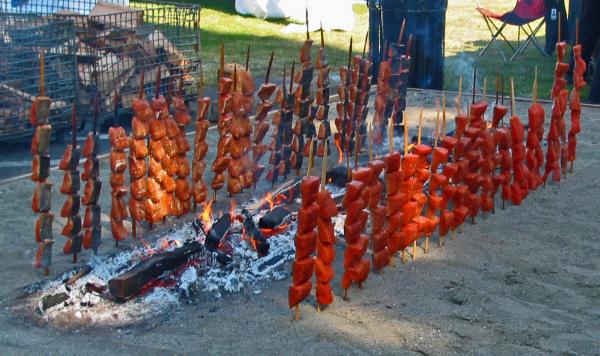 Tulalip Casino & Resort
Salmon On a Stick is a traditional preparation method for slow-roasting salmon on iron wood sticks over wood coals. The method is at least several centuries old and is part of a rich tribal heritage for the Pacific Northwest’s Coast Salish peoples.

Long before the “100-mile diet” became the trendy new way to eat, Native American people of the Pacific Northwest were immersed in this way of eating. And little wonder, for they lived in an environment that was astonishingly bountiful. Forests overflowed with deer, elk, berries, flowers, seeds and greens. Seas and rivers teemed with salmon, prawn, crab and other nourishing plant and animal life. Shorelines were rich with clams, oysters and seaweed.

Food was central to traditional life and was especially enjoyed at feasts and potlatches, where platters boasted salmon, oolichan (a small, oily member of the smelt family), venison, bannock, wild berry jams and much more. For Native people, food is what connected them to family, community and even the afterlife.

Then came the white man, and everything changed. In today’s era, food, generally processed, is purchased at supermarkets or fast-food outlets. Nutrition is too often replaced by sugar, salt and glitzy packaging. And, as is well documented, the health of Native peoples has slowly spiralled downward.

But there is good news: traditional foods are making a comeback. Even better, the old dishes are being infused with modern culinary innovations to make tasty, attractive, and of course, healthy cuisine.

I was in the Salmon n’ Bannock Bistro in Vancouver, British Columbia with a Haida canoe suspended from the ceiling and Native art adorning the deep red walls. The server placed an attractive appetizer platter from the ‘Land and Sea Feast’ menu on the table. I popped a spicy game chorizo sausage into my mouth … wonderful! Then I savored Indian candy — smoked salmon covered with a maple syrup glaze. I spread barbequed salmon mousse on bannock and ladled blueberry chutney onto a piece of bison carpaccio.

With my mouth full, it was hard to speak, so I listened to Inez Cook, Nuxalk Nation, the co-owner and manager of this fine-dining restaurant, which is winning accolades on the hotly competitive Vancouver cuisine scene. “My bistro is unique. It’s the only restaurant in Vancouver that offers 100 percent First Nations’ food, and it’s staffed entirely by Native people,” she said. “I’m very proud of First Nations’ food,” she continued. “It’s great. I want to shout out: ‘Try it! Eat it!’” I acquiesced and speared a piece of musk ox prosciutto. Delightful!

The bistro opened in 2010 and has slowly gained a following. “None of our food contains preservatives or additives,” Cook said. “Nothing is raised in factory farms or is genetically modified. We source all fresh and wild foods so it’s very healthy.”

“The most popular dishes are salmon, barbequed or smoked, and deer shank with red wine gravy,” Cook said. These are paired with wines from Nk’Mip Cellars, a Native-owned and -operated winery in the Okanagan Valley, central British Columbia.”

When I remarked that the menu featured mostly fish and meat, Cook answered with a laugh, “Yes, Natives think that vegetarians are just lousy hunters.”

At present, unfortunately, eating establishments offering traditional Native food are rare. The Blackfish Salmon Grill at Tulalip Casino & Resort, north of Seattle, Washington, is one of the exceptions. “We are not a strictly Native cuisine restaurant,” explained Chef David Buchanan, “but rather, our style is innovative Pacific Northwest influenced by traditional tribal culture and cuisine.”

“We strive to put a little twist on every dish, to make it our own.  For instance, our crab cakes have roasted fresh sweet corn and apple-smoked bacon in them and are served with three sauces and an apple-watercress salad,” Buchanan explained.

The Blackfish Salmon Grill is like a Longhouse with large beams accenting the ceiling and a long, beautiful natural wood community table in the center of the room.  The focal piece is an open fire pit on which on which the Salmon on a Stick is prepared.

Buchanan said “I am especially intrigued by how in Native culture the entire process of a meal is so holistic. Thanks is given for the return of the salmon each year and for the sustenance it gives. Thanks and a prayer are also given for the wood when it is harvested to carve the Ironwood sticks used for roasting the salmon. Those who prepare the meal should do so with good intent in their hearts. The meal is a time for sharing with friends and family, and being thankful for those who helped catch and prepare the food.”

But those living in the Seattle area don’t need to go to a fancy restaurant to enjoy Native food. Instead, they can use Facebook to track down the current location of Off the Rez, the first Native American food truck in the country. Pale blue in color, the truck serves up a variety of Native fry breads of which the three-taco combo with pork, beef and chicken fillings is reputed to be outstanding.

There are two smaller but notable Native eateries. The Riverwalk Café at the Quw’utsun Cultural Centre in Duncan, BC, on Vancouver Island. Situated on the banks of the Cowichan River, a heritage river with three salmon runs each year, the Café features such delicacies as smoked and candied salmon, clams and octopus. The Riverwalk Café is open only for lunch from June to September.

The Thunderbird Café is part of the Squamish Lilwat Cultural Centre in Whistler, BC. It is open year-round but only to 5 p.m. Its Indian Taco with venison chilli and bannock is reputed to be truly man-size. Other favorites are salmon chowder and smokies made of wild boar and bison. They also make a venison pemmican with local berries and nuts.

While waiting for more restaurants to offer traditional Native cuisine, you may decide to cook at home with friends. Thanks to Dolly and Annie Watts, a mother and daughter team, you can do just that, guided by their book, Where People Feast – An Indigenous People’s Cookbook. The cookbook, one of the few that focuses on west coast Native cuisine, appeared in 2007 and was an instant hit, winning rave reviews and the Gourmand Award for best local cuisine book in Canada. Where People Feast is crammed with easy-to-follow traditional and modern aboriginal recipes, from hot buttered halibut to juniper berry sauce to bannock and also includes methods for smoking and drying wild game, preparing seafood and preserving berries.

A champion of traditional Native food is Chef Ben Genaille, a Cree, who moved from Manitoba to the west coast about 20 years ago where he has worked at several top restaurants. He’s passionate about Native dishes, preparing them using contemporary methods and presenting them with modern flair. He established an Aboriginal Culinary Program at Thompson River University, Kamloops, British Columbia, the only one in North America.

In 2012, Genaille led a team of five young west-coast Native chefs to the World Culinary Olympics in Germany. “I’m very proud of them. They worked hard and trained for five years for the competition,” he said. “We focussed on Pacific Northwest ingredients and showed the world that First Nations cuisine is at the cutting edge of local food.” Dishes that caught the judges’ eyes included oolichan oil in dessert, herring eggs in soup and a platter with five types of salmon, each prepared a different way.

Chef Genaille is an unabashed supporter of Native cuisine. “It all hinges on getting talented young chefs,” he stresses. “We must strive to give them pride and passion. And that’s happening. As these young chefs develop, traditional Native food will grow in popularity.”

Preheat oven to 350°F (180° C). Crush the berries, garlic, cayenne pepper, cumin seeds, and onion flakes in a mortar. Rub the crushed spices onto the roast and then pan-sear the roast in a hot frying pan with the oil to lock in the juices. Put roast in a roasting pan and add the boiling water, then roast for 1 hour, basting at least 4 times. Makes 3 servings.