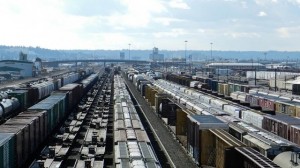 The view from the BNSF Railway rail yard in Spokane.
Courtney Flatt

Washington regulators say the region’s biggest oil-train operator should be penalized after failing to comply with reporting requirements following 14 spills of hazardous materials, including crude oil.

The state Utilities and Transportation Commission said Thursday an investigation had found that between Nov. 1 of last year and Feb. 24, BNSF Railway committed 700 violations of the state’s reporting requirement for railway spills of hazardous materials. Four of those spills involved trains carrying crude oil through Washington state.

Under the state’s requirement, BNSF was obligated to  call a toll-free number within 30 minutes of an incident.

“When a company fails to notify, that means that critical response resources might not be deployed and that really could cause potential harm to the public and the environment,” commission spokeswoman Amanda Maxwell said. “That could also lead to a delay in response and containment resources necessary to clean up the spill. That’s why that 30 minutes is vital to the response and reporting of the incident.”

Companies can face fines of $1,000 for each day such an incident goes unreported.

State officials say BNSF Railway could owe up to $700,000  for failing to inform responders about the 14 spills.

Courtney Wallace, a spokeswoman for BNSF, issued a prepared statement, saying her railway “believed we were complying in good faith with the requirements from our agency partners.”

The statement went on to say BNSF had followed guidance from state regulators with the commission, reviewed its own reporting notification process, and changed its practices to address regulators’ concerns.

According to the commission, BNSF will have the opportunity to request a hearing to respond to the allegations and ultimately the commissioners will decide the outcome.  Commissioners will consider several factors, including how serious and harmful the violations were to the public, whether the violations were intentional, and how cooperative and responsive BNSF was.