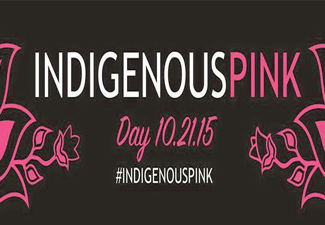 On October 21, AICAF asks men and women of all ages to wear pink and share photos on social media using the hashtag #indigenouspink to spread breast cancer awareness.

“All of America has jumped onto pink October and sometimes it’s done in ways that exploit the cancer issue,” Rhodes said. “But for the American Indian Cancer Foundation, Indigenous Pink is an important way to raise visibility in our communities where cancer is still invisible and to take control with screening.”

Breast cancer is the second leading cause of cancer death and the most common cancer found in American Indian and Alaska Native women. But when breast cancer is found early, the five-year survival rate is 98 percent, according to Susan G. Komen for the Cure.

Barbara Scott, an enrolled member of the Lumbee tribe of North Carolina who lives in Charlotte, was diagnosed with Stage 4 breast cancer in 2005. Over the next six months, she underwent aggressive chemotherapy and radiation to remove a tumor that had metastasized to her lymph nodes.

“I was ready to give up, I was tired of fighting and wanted to just go home,” Scott said.

Scott was at particular risk for breast cancer, she said, because her mother had breast cancer and her family carries the gene for the disease.

But regardless of a family history, American Indian women shouldn’t be scared of breast cancer and modern medicine, she said.

“We are a resilient people, we have survived for forever, and we can’t let something like breast cancer get into the way,” Scott said. “We need to be warriors and stand strong.”

“I think in the community where we are in, where there are such high rates of cancer, we need to find these cancers early,” Davis said.

“Take your health into your own hands. Utilize your resources and ask as many questions as you can,” she said.

In recent years there has been a tremendous increase in the number of American Indian women who have been screened for breast cancer in Minnesota, said GayLynn Richards, the regional coordinator of Sage, Minnesota’s breast and cervical cancer screening program.

Richards also said there has been a reduction in breast cancer deaths among Minnesota American Indian women over the last decade, according to Minnesota Cancer Surveillance System data.

She credits the lower death rate to programs like the Shakopee Mdewakanton Sioux Community mobile unit, which brings mammograms and other screening services directly to the communities where American Indian women live.

“We listen, learn and seek out information from the community members, and together come up with an intervention or educational approach that is respectful,” Richards said. “We love the idea of bringing the services to the community.”

Julia Jacobson is a recent college graduate and communications specialist.

NHNA creates shared health coverage for American Indian communities at no cost. Registered users can download additional print, web and audio content at http://www.nativehealthnews.com and publish as is or add their own reporting, highlighting important issues within the local Native community. NHNA services are free to all those who think good journalism has a positive impact in the lives of all of our readers, listeners, and viewers. 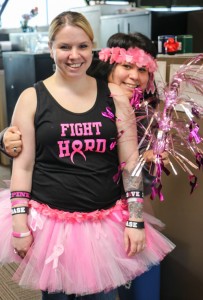 On September 19-21 they will tackle 60 miles in 3 days. Their walk begins at the Seattle Center, finishing at the Memorial Stadium at Seattle Center. Their motivation? Women close to their heart.

“I joined this adventure for two women that touched my life,” said Cortez, who is currently fundraising for the three-day walk. “My high school friend was diagnosed [with breast cancer] right after graduation. She didn’t survive her battle. The other is my grandmother who is a survivor of 17 years. She is an amazing woman to me. These two women are the reason I walk and hope to find a cure. Because no child should have to be raised without a mother, grandmother, aunt, friend, or family member that has been taken by this horrible disease. So I walk for those that are not with us or unable to walk.”

Montero-Higginbotham, whose family history includes cancer in a variety of forms, is walking in support of her aunts.

“In January I decided I would take this journey in memory of my Auntie Sylvia Montero. She was an advocate, patient educator and role model for Alaska Natives and Native Americans living with cancer. She lost her battle with the disease in October 2003.  In February of this year I found out my Auntie Pat Antioquia, who has been a survivor, has had her cancer return. There isn’t a reason I shouldn’t walk this walk, so I signed up,” explains Montero-Higginbotham in her Susan G. Komen fundraising page.

Cortez and Montero-Higginbotham, are joined by Montero-Higginbotham’s husband Rob, are each trying to raise $2,300 for a total of $6,900, for the Kindred Spirits team they will be walking with. So far they are halfway there, but are still in need of donations. The money raised will go to support breast cancer research, training, and education outreach.

Last year $3.3 million was raised at the Seattle Komen 3-day walk. According to BreastCancer.org in 2013, an estimated 232,340 new cases of invasive breast cancer were expected to be diagnosed in women in the U.S., along with 64,640 new cases of non-invasive (in situ) breast cancer.

So far Kindred Spirits have put in 70 miles of training with an average of 6.5 to 8.5 miles walked a day. By the time of the 3-day walk the team will have walked an approximate 580 training miles. 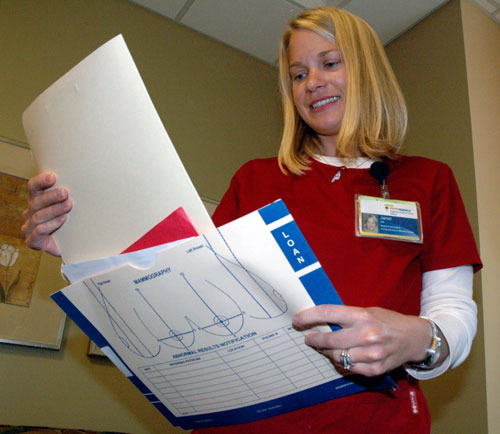 EVERETT — While a number of other health agencies throughout Snohomish County are able to specialize in diagnosing and treating certain parts of breast cancer, many of them refer their support services to the Providence Regional Cancer Partnership.

Mary Gallagher and Nicola Mucci, who work in patient support services at the Providence Regional Cancer Partnership, noted that Providence provides not only diagnostic services, surgery, chemotherapy and radiation, but also support services such as counseling, support groups, massage, acupuncture, yoga and dietician services. Many of these services are integrated to ensure that Providence is caring for patients’ minds and bodies at the same time.

“Patient support services offer a more holistic approach to health care,” Mucci said. “Patients can work with our teams and take advantage of our resources to address the emotional aspects of what they’re going through.”

“Relationships have become a focus for us lately,” Gallagher said. “We’re looking at how women with breast cancer and their families are adapting to the new circumstances that they’re all facing, the patients and their loved ones alike. How do they deal with these new emotions?”

“Younger breast cancer patients are going to be facing issues that are less relevant to women who are 45 years and older,” Mucci said. “Younger women need to know how to deal with breast cancer when they still have young children at home, and how to balance their family, career and health concerns. There are also going to be issues tied to sexuality and intimacy with their partners, as well as the shock of being diagnosed with breast cancer at a younger age.”

Mucci added that, regardless of whether the support groups are specific to younger or older cancer patients, family members are always welcome to attend, and indeed, Gallagher pointed out that many aspects of cancer impact the patients’ families as hard as the patients themselves.

“The idea is to let patients know that they have that emotional support at every stage of their journeys,” Gallagher said. “At the same time, we try to help those patients’ caregivers manage their own stress levels. Simple tasks such as balancing the checkbook and doing the laundry become much more challenging when they’re undergoing treatment, so especially if the caregivers are the adult children of the patients, they need to learn to be patient with their parents.”

Between scheduling appointments, providing transportation, picking up medications and running errands such as grocery shopping for their loved ones, Gallagher estimated that caregivers can easily find themselves saddled with an extra 20 hours of work per week.

“To keep them from overextending themselves and burning out, we teach them how to ‘Share the Care,’” Gallagher said. “If they can get help from their own families and friends, and disperse those tasks, it lightens the load on everyone.”

“What’s new in how we’re helping caregivers is that we’re acknowledging that everyone in the family is affected by cancer, not just the patient,” Mucci said.

“The family is the patient,” Gallagher said. “Patients who are used to living independent, private lives need to learn how to open up to others. At the same time, they need to have self-esteem and feel good about themselves. The mind and the body are so interwoven that we can experience stresses as physical sensations.”

The Providence Regional Cancer Partnership is located at 1717 13th St. in Everett. For more information, log onto www.cancerpartnership.org.

1. A woman’s chance of developing breast cancer is 1 in 8.

2. All women are at risk for breast cancer.

3. An estimated 232,340 new cases are expected to be diagnosed in women in the United States this year.

5. Breast cancer is the most frequently diagnosed non-skin cancer in women.

Schedule a mammogram today. It could save your life. If you need help paying for a mammogram, contact the American Cancer Society at 1.800.227.2345 or visit http://www.cancer.org.