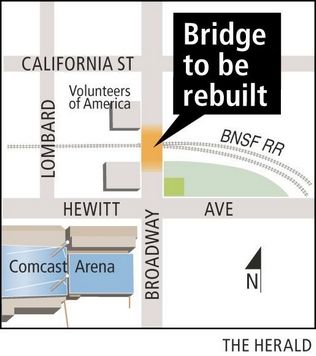 EVERETT — As they puzzled over how to go about replacing the Broadway bridge, city engineers initially thought they would keep lanes open during construction.

Then they considered a complete shutdown.

Turns out, the city stands to save $1 million and a full year of construction time by closing a block on one of the main drags through Everett until the work is done.

Drivers can expect to find a massive roadblock there about six months from now, when the $9 million project is expected to begin.

The planned closure will prevent people from driving Broadway between Hewitt Avenue and California Street for up to a year. The city has planned extensive detours and intends to warn drivers well in advance, through signs along I-5 and Highway 529. A city public awareness campaign is in the works for later this year.

Drivers can be forgiven for not noticing the 101-year-old bridge, which looks like a hump in the road.

The bridge carries traffic over the Burlington Northern Santa Fe railroad tracks, with about 30,000 vehicles traveling it every day. The only major renovation occurred in 1931.

The city for years as listed the bridge replacement among its top infrastructure needs.

In the meantime, city engineers took precautions. Load restrictions were placed on the span in 2008. Parking isn’t allowed on the bridge either. The structure is weaker toward the edges than in the middle, so trucks are asked to stay in the middle lanes.

The current schedule is to put the work out to bid in October. Prep work is expected to begin late this year and demolition in early 2014.

Construction should be complete by fall of next year, leaving only cleanup before it reopens.

The finished product will look similar, but not identical, to the arched Pacific Avenue bridge near Everett Station, Sass said.

Construction should have no impact on rail operations, BNSF spokesman Gus Melonas said. The railroad expects to expand freight operations with the approximate foot or so of extra clearance city engineers have said the new bridge would provide.

About $8 million of the cost is being paid for with a federal grant. The remaining $1 million will be split between Everett and BNSF.

MOUNT VERNON — Nearly all the materials for a temporary I-5 bridge over the Skagit River have arrived at the site and the Washington Transportation Department hopes to meet the governor’s goal of spanning a collapsed section by mid-June, officials said.

A section of the bridge collapsed May 23 after a girder was struck by an oversize load on a truck. Traffic is detoured through Mount Vernon and Burlington, creating a roadblock on the main trade and tourism route between Seattle and Vancouver, B.C..

Kelly Nantel of the NTSB said Thursday that it had no information to release on when its investigation would be complete. An interview with the driver of a pilot car for the truck had been scheduled Wednesday but had to be rescheduled.

“They need to release the site to us and we need to get in the water and inspect the piers and see what shape they’re in,” state Transportation Department spokeswoman Abbi Russell said from Shoreline. “If they’re sound we can start looking at what the temporary structure will look like.”

Work is continuing with all possible speed. Divers worked overnight Wednesday in cold murky water to remove jagged pieces of the fallen bridge deck. Some girders still under water have to be preserved for NTSB inspectors, she said.

Work will continue through the weekend. Some piece of the temporary structure can be assembled off-site and rolled into place later.

The temporary bridge will replace the 160-foot section that fell into the water. That will reopen two lanes in each direction. A permanent replacement this fall should restore the bridge.

Federal money is paying for the temporary span and 91 percent of the replacement. But there are no plans for a new and improved bridge to replace the 58-year-old structure. Peterson told the Mount Vernon teleconference that there are a lot more bridges in Washington in worse shape.

Meanwhile, traffic delays are easing on the detours around the fallen bridge, which carried 71,000 vehicles a day.

“People are getting into a routine,” Russell said. “We still have backups here and there.” Afternoons seem a little more congested than mornings, she said. 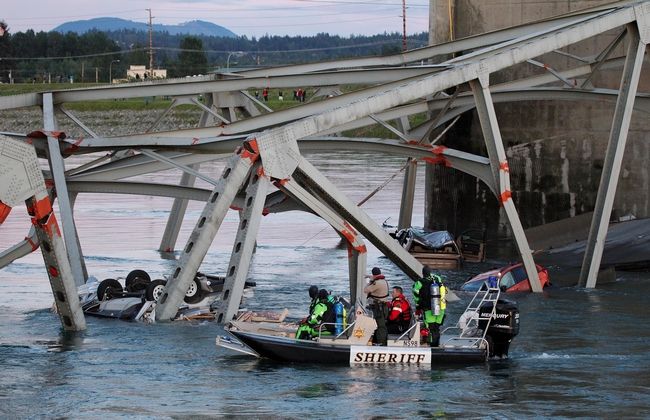 Jennifer Buchanan / The Herald
Rescuers work in the water after the Interstate 5 bridge collapsed over the Skagit River in Mount Vernon on Thursday.

By Gale Fiege and Eric Stevick, The Herald

MOUNT VERNON — The four-lane I-5 bridge over the Skagit River collapsed about 7 p.m. Thursday, dumping vehicles and people into the water, the Washington State Patrol said.

Rescue crews raced to the scene and after a frantic hour reported that there was no loss of life.

Marcus Deyerin, a spokesman for the Northwest Washington Incident Management Team, said there were only two vehicles involved: a pickup truck towing a trailer and a small passenger vehicle.

Two people were in the truck; one in the car. All were rescued and receiving medical attention, he said. Two people injured in the collapse were en route to Skagit Valley Hospital. A third was being transported to a different area hospital.

There was no immediate reason to believe anyone else was involved in the collapse, but crews were scouring the river to make sure, he said.

“Now we begin the recovery stage dealing with a major interstate highway that is nonfunctional at the moment,” Deyerin said.

“Our state bridge engineer is looking into the possibility that an oversize load may have struck the bridge. Still investigating,” the Washington State Department of Transportation tweeted.

“We were extremely lucky that it wasn’t worse,” Deyerin said.

That was especially true given the traffic volume Thursday night, and even more traffic that could have been expected on Friday, the start of the Memorial Day weekend.

He said for people to be prepared for major impacts on travel, particularly in the communities of Mount Vernon and Burlington.

Floyd Richardson, a Mount Vernon logger, was outside his home when he heard the bridge collapse.

There was no immediate word on the cause of the collapse, said Jaime Smith, director of media relations for Gov. Jay Inslee. The National Transportation Safety Board plans to send a “full go-team” to investigate, according to the agency’s Twitter account.

The collapse comes just before the busy Memorial Day weekend.

A lot of Skagit Valley residents are wondering how the fallen span will affect their commutes to work.

“I’ll take the back roads,” Richardson said. “I know all the tricks.”

Homer Diaz, of Mount Vernon, was among the hundreds of bystanders lining the river bank. He crosses the bridge to and from work each day.

Thursday night, the inevitable inconvenience of the pending commute seemed a secondary concern. His fiancé crossed the bridge shortly before it collapsed.

“Thank God she wasn’t on it then,” he said. “I feel sorry for the people who fell in.”

Russell Hester, of Mount Vernon, is eager to learn how long it will take to replace the bridge.

“For the locals, there are not a lot of ways to get across,” he said.

Tasha Zahlis suspected something was wrong when there were two brief power surges at her home nearby and her dogs began barking.

She crossed the bridge 10 minutes before it collapsed on her way home from work.

“I absolutely had an angel over me,” she said. “I am so thankful.”

Michael Szagajek arrived in time to see debris from the collapsed bridged still raining onto the river.

“It was still crumbling,” he said. “It was unbelievable.”

When he spotted one of the drivers in the river standing atop a car, it took him a moment to convince himself what he saw was real.

Tandy Wilbur of La Conner was visiting a car dealership on the river’s north side when the lights suddenly went out.

He ran outside to see what was wrong and realized the bridge had collapsed.

When Wilbur reached the top of the dike he saw a man seated atop an orange Geo Metro in the river.

He began searching the banks to see if there was anyone he could help.

“It is a horrible thing,” Wilbur said about an hour after the collapse.

A crowd of about 1,000 people stood along the dikes as the sun set. Christie Wolfe, of Oak Harbor, was among those who raced to the river’s edge. She knew her truck-driving boyfriend was supposed to be on the bridge about the time it collapsed.

He finally got through on the phone to let her know that he had stopped in time.

Rescue boats and hydrofoils crisscrossed on the river while helicopters hovered above.

The Geo Metro was still in the river, its windshield wipers sweeping side to side.

A hovercraft crew surveying the scene reported there was a full-size pickup truck with a trailer and a smaller passenger car in the river.

Inslee was expected at the scene. He was to be joined by Washington State Patrol Chief John Batiste and WSDOT Secretary Lynn Peterson.

The 1,111-foot, steel-truss bridge was built in 1955, according to the nongovernmental website nationalbridges.com, which offers a searchable database of the National Bridge Inventory compiled by the Federal Highway Administration. It was built before the freeway for U.S. 99.

The database classifies the Skagit River bridge over I-5 as “functionally obsolete,” which indicates the design is not ideal, but it is not rated as “structurally deficient.”

“‘Functionally obsolete’ does not communicate anything of a structural nature,” according to nationalbridges.com. “A functionally obsolete bridge may be perfectly safe and structurally sound but may be the source of traffic jams or may not have a high enough clearance to allow an oversized vehicle.”

In 2010, according to the database, the bridge carried an average of 70,925 vehicles per day. The substructure was deemed in “good condition,” and the superstructure and deck were described as in “satisfactory condition.”

The federal database says a structural evaluation of the bridge found it “somewhat better than minimum adequacy to tolerate being left in place as is.”

According to a 2012 Skagit County Public Works Department, 42 of the county’s 108 bridges are 50 years or older. The document says eight of the bridges are more than 70 years old and two are over 80.

Washington state was given a C in the American Society of Civil Engineers’ 2013 infrastructure report card and a C- when it came to the state’s bridges. The group said more than a quarter of Washington’s 7,840 bridges are considered structurally deficient or functionally obsolete.

More volunteers were sent from Skagit and Whatcom counties because it was unclear if Snohomish County crews could reach the scene as quickly, he said.

Regional Red Cross leaders had just gotten off a plane when they heard the news, Morrison said. They’re working with state disaster officials as well.