How grassroots organizing is stopping waste incinerators in Wisconsin 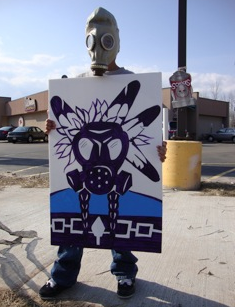 Last month, members of the Oneida Tribe of Indians of Wisconsin hammered the final nail in the coffin for waste incinerator proposals on the Oneida lands, including parts of Brown and Outagamie Counties.

On May 5, more than 1800 Oneida General Tribal Council members overwhelmingly voted to reject the Oneida Seven Generations Corporation’s bid to build a pyrolysis gasification incinerator. Despite millions of dollars of subsidies offered by the U.S. Department of Energy, the Bureau of Indian Affairs and the Wisconsin Economic Development Corporation, the Green Bay City Council and now the Oneida Nation have sent a clear message to all extreme energy and waste corporations that burners are not welcome in their backyards, or those of their neighbors.

This facility fight has been at the center of public debate for more than two years, and numerous environmental groups, health experts and advocates from around the state and across the U.S. provided support for this protracted community battle. However, the most inspiring, and instructive stories are those of grassroots, community organizing that led these victories. The following are reflections from parallel organizing efforts in the communities of Oneida and Green Bay.

Incinerator Free Brown County came together in the fall of 2010, when an article appeared in the Green Bay newspaper announcing that a waste-to-energy plant would be built by the Oneida Seven Generations Corporation (OSGC). The proposed site was near a residential area in the Village of Hobart. Alarmed by the potential health, economic, and environmental hazards posed by this plant, residents banded together, posting flyers door-to-door, in an effort to galvanize awareness and concern. They formed the Biomass Opposition Committee (BOC), and after the site was relocated to the city of Green Bay, they changed their name to Incinerator Free Brown County (IFBC) to promote a countywide campaign.

Everyone within a 2-mile radius of the incinerator site was made aware of the proposal and community members joined meetings to discuss organizing plans. At each meeting core members volunteered to raise funds to cover organizing expenses. These funds were used to share information about waste incineration through local signature petitions, fact sheets and media.

IFBC reached out to groups such as GAIA, Indigenous Environmental Network, Greenaction for Health and Environmental Justice, Waukesha Environmental Action League, Clean Water Action, and the Wisconsin Sierra Club for support. A number of health professionals also responded, experts who testify in support of communities opposing polluting industries. In March 2013, Dr. Paul Connett and Bradley Angel of Greenaction gave public presentations on the danger of incinerators and the benefits of zero waste. DVD recordings of their presentations were used to deepen community awareness.

Opposition to the incinerator grew in the spring of 2011 when Clean Water Action financed and—with community input—designed 4 billboards and numerous yard signs that broadcast their message to the general public, attracting the attention of the Mayor, local media, and the OSGC.

However, the fight was not without its challenges. For months, the Mayor, City Council and elected officials of the Oneida Nation avoided meeting with organizers.

IFBC kept detailed records of all documents produced by the OSGC and used these to strategically expose contradictions in the company’s technology claims. Organizers met with local officials, educating Green Bay’s elected leaders on the environmental, health, and economic impacts of the incinerator. Local residents were encouraged to contact officials to ensure that public opposition remained on the agenda.

Finally, in October 2012, after a legal challenge highlighting misleading claims by the incinerator company, IFBC and allies convinced the Green Bay Council to revoke the incinerator’s conditional use permit.  After the Mayor decided not to veto the council’s vote, the City Attorney officiated revoking of the permit.

Organizers with IFBC have shared their insights in their Incinerator Resistance Guide—so that other grassroots groups can learn from their lessons, mistakes, and successes as well as ways to maintain good humor during such protracted battles, where persistence and perseverance win. 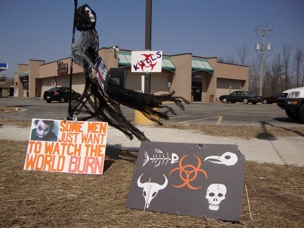 Leah Sue Dodge is a member of the Oneida Tribe of Wisconsin, one of six Indigenous Nations that make up the Haudenosaunee (Iroquois) Confederacy. Leah first learned of the waste burner from an opinion piece in the Oneida Tribal newspaper. Her community was already wary of the toxic threats posed by this facility, as well as the prospect of thousands of diesel trucks transporting garbage through the community on route to the incinerator.

With the emerging debate in neighboring Green Bay, and news that the incinerator company had made claims there would be no harmful emissions, not even smokestacks, associated with this untested waste gasification technology, members of Leah’s community grew increasingly concerned.

After the Green Bay City Council revoked the incinerator permit, OSGC followed with legal action. On January 9th, 2013 a Brown County circuit court judge decided to uphold the Green Bay decision, finding that the company had indeed misrepresented the facts: “(OSGC) indicated that there are no smoke stacks, no oxygen, and no ash. I am satisfied that is a misstatement.”

The decision prompted OSGC to look at siting a smaller “plastics-to-fuel” incinerator on tribal lands—as a stepping-stone towards a “full size” facility. Learning this news Leah decided to get more involved. As an Oneida member, Leah felt a responsibility to warn her community about Oneida money being invested in this project, and that her Tribe’s reputation was at stake, despite personal concerns about how her actions could affect her Tribal employment due to the powerful and moneyed interests involved. However, in her words, “The risk of my home being poisoned was greater than these fears.”

To start her inquiry, Leah decided to meet with key Oneida decision-makers: Oneida Business Committee Chair Ed Delgado and Yvonne Metivier, Oneida Elder Advisor to the Chairperson. Metivier suggested Leah draft a petition to demonstrate broad community opposition, and bring the matter before the General Tribal Council for a vote. She advised Dodge to keep the petition focused, and achievable in scope: a) aimed at stopping the incinerator from being approved for all Oneida lands, and, b) worded in a manner that did not require extensive legislative or financial analysis.

Leah promptly went to work, drafting and seeking signatures for the petition, which read: The General Tribal Council directs the Oneida Business Committee to stop Oneida Seven Generations Corporation (OSGC) from building any “gasification” or “waste-to-energy” or “plastics recycling” plant at N7239 Water Circle Place, Oneida, WI or any other location on the Oneida Reservation.

Over the next 10 days, Leah gathered names on the petition, ensuring they were all Oneida members of voting age. Signatures of Oneida members of all ages, as well as members of other tribes were also presented to the Oneida Land Commission in opposition to a land-use permit for the facility. Despite the proposed site being in ecologically sensitive wetlands, and less than a mile from the Turtle Elementary School, the high school and Oneida legislative offices, the Commission decided in favor of the facility.

At this stage, Leah decided to seek broader community engagement. Leading into the May 2013 general assembly of the Oneida Tribal Council, Leah purchased ads in the Tribal newspaper, distributed information for concerned Oneidas to share via social networks. Leah worked with others to develop a community action for two days at an intersection near the incinerator site. Deliberately choosing not to label the action a “protest”, they called it a Fun Action of Conscience & Teaching (FACT). “This was about supporting what we are for, rather than focusing solely on what we are against.” 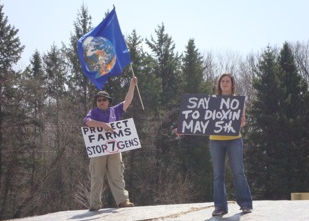 Visually communicating these stories was a key element of the FACT action, with artistry by Hill helping illustrate the philosophy of caring for earth’s precious resources—because the Great Law of Peace teaches that in all actions we must consider how we affect the next seven generations. Leah noted this philosophy was clearly at odds with the business model of any company planning to waste and burn earth’s resources, despite their attempts at green branding.

The FACT action coupled with strong presentations to the Oneida General Tribal Council served to unite the Oneida community against the burners, going to show how community-led organizing can be irresistible when coupled with place-based culture and ecosystems knowledge.

Leah Sue Dodge acknowledges the support received from the Clean Water Action Council of Northeast Wisconsin, IFBC and their neighbors of the Mather Heights Neighborhood Association, who all valiantly and victoriously fought the incinerator proposal outside the Oneida Reservation. She hopes that, moving forward, Tribal leadership will work with these organizations to challenge environmental and health threats for the benefit of everyone.