By Wayne Kruse, The Herald

If you’re a sport fisherman, these are the good ol’ days. A record number of fall chinook are wending their way up the Columbia, providing catches of one to two chinook per rod at the mouths of the Cowlitz and Lewis rivers the past several weeks. Some 900,000 coho are due in Puget Sound, and are taking up the slack left by a big pink run. So many razor clams are available on the ocean beaches that state officials have decided to start the fall digging season early.

And on and on. If you don’t want to get bit by a fish, stay away from the water.

State Department of Fish and Wildlife biologist Joe Hymer, at the agency’s Vancouver office, said last week marked the largest fall chinook count (and still counting) since Bonneville Dam was built in 1938. The old record was a run of 611,000 fish in 2003, and this one is predicted to be somewhere in the 800,000-fish range.

Many of these big kings are “upriver brights,” headed for the Hanford Reach, and should be the basis for a gunnysack fall fishery in the area of the Vernita Bridge, upriver from the Tri-Cities.

Creel checks on the Reach last week showed 762 boat anglers with 244 adult and 132 jack chinook, but that success rate will improve rapidly.

On the local front, the annual derby for the blind was held Monday, and results bode well for this weekend’s big Everett Coho Derby. Jim Brauch, avid angler and an Everett Steelhead and Salmon Club member, hosted a derby participant Monday and limited out in Brown’s Bay on silvers of 5 to 8 pounds. He said 55 feet was the magic depth, and an Ace High fly the top lure.

Brauch said he also talked to anglers at Douglas Bar on the Snohomish River on Sunday. They reported coho as far up as the Highway 522 bridge.

Mike Chamberlain at Ted’s Sport Center in Lynnwood said there seems to be good numbers of silvers in the area, and that the derby should draw well. He said the fish are moving, not schooled up particularly, and that fishermen should cover a lot of water.

“Coho are where you find them, and hanging around all the rest of the boats can be counter-productive,” he said.

Chamberlain likes the Grand Slam Bucktail in green, and the Ace High fly in either chartreuse or green spatterback, or purple haze, behind a green or white glow flasher. The “Mountain Dew” series of Hot Spot flashers also are fish catchers, he said. Rig the flies 32 or 36 inches behind the flasher, and add a small herring strip.

There will be two free fishing seminars prior to the Everett Derby. The first is tonight — from 6:30 to 7:30 p.m. — at the Tulalip Cabela’s Conference Center, where Ryan Bigley of Soundbite Sportfishing will share tips and tactics for advanced coho fishing in Puget Sound. Space is limited; RSVP by calling 360-474-4880.

The second seminar is scheduled for 7 p.m. Friday and features John Martinis of John’s Sporting Goods in Everett, with everything you need to know to fish the coho derby. The venue is Everett Bayside Marine. For more information, call Bayside at 425-252-3088.

In a first for this area, the Sportsman Channel and Comcast are teaming up with the Everett Derby to donate fish caught by participating anglers to help those less fortunate. The event is part of the Sportsman Channel’s Hunt.Fish.Feed. outreach program that taps an underutilized food source of game meat and fish donated by sportsmen to feed those struggling with hunger across the country.

Participating anglers from the Everett derby are expected to donate more than 1,000 pounds of fresh fish to the Volunteers of America food bank in north Everett.

State shellfish managers are practically begging diggers to take razor clams off their hands, as the fall season arrives.

“We have a huge number of clams available for harvest this season, paricularly at Twin Harbors,” said Dan Ayres, the state’s coastal razor clam honcho. “There are only so many good clamming tides during the year, and we decided there was no time to waste in getting started.”

Ayres said that while the fall digging schedule is still being developed, managers saw no reason to delay a dig at Twin Harbors.

Ayres said estimates of coastal razor clam populations indicate some 800,000 more clams available for harvest this year than last. And last year saw 420,000 digger trips harvesting 6.1 million clams, for an average of just under the per-person limit of 15 per day.

And if 2013 is going to be better than that, it’ll likely get wild down there in the dunes.

fowl Classic is set to be celebrated at the hunting, fishing and outdoor gear retailer’s Tulalip location on Sept. 14-15.

The store will feature sales, guest appearances, seminars, family activities and more, on Saturday and Sunday from 10 a.m. to 4 p.m.

Activities and seminars taking place on Sept. 14 include topics such as choosing the right waterfowl camouflage, the science of duck and goose calling with Zink Calls’ Pro Staff Chad Nelson, proper decoy placement in variable terrain, goose and duck sausage and jerky secrets, kids duck calling contest and camouflage face painting challenge and duck blind breakfast ideas. Attendees have the opportunity to participate in a meet and greet with local conservation partners.

On Sunday, the store will host the following seminars — Waterfowl University, Waterfowl Shooting Essentials, After the Shot: Processing the Bird,  Rigging Your Decoys for Success and more.

More information about Cabela’s Waterfowl Classic sales and weekend activities can be found online at www.cabelas.com/tulalip.

By Wayne Kruse, Special to The Herald

That pink haze on the horizon means the odd-year humpy invasion is nearly here, and it’s time to start gearing up before the good stuff is all gone. The first pink salmon in the eastern Strait of Juan de Fuca was caught July 3, out of the Ediz Hook public ramp in Port Angeles, and larger numbers quickly followed.

By last Sunday, state Department of Fish and Wildlife creel samplers tallied 146 anglers at the hook with 151 pinks. The catch also included 28 chinook and 8 coho.

Gary Krein of Everett, owner of All Star Charters (425-252-4188), said fishable numbers of pinks should be available on the west side of Possession Bar/Double Bluff somewhere between August 1st and 5th, and on this side — Brown’s Bay and the shipwreck — between the 8th and 12th.

Stock up on white flashers, standard 11-inch, or similar dodgers, and pink or red mini squids tied on double 4/0 hooks. Plan on using 24 to 26 inches of leader, Krein said, and a very slow troll.

Cabela’s Tulalip store has scheduled a full range of free pink salmon seminars this weekend, as follows (the times apply both Saturday and Sunday):

Also, check out free demonstrations on smoking your catch, kids’ casting, and a lot more.

For a full schedule of pink salmon and archery hunting seminars coming up, visit www.cabelas.com/tulalip, or call 360-474-4880.

The hugely popular sockeye fishery on Baker Lake opened yesterday, and was too new at time of writing to produce any meaningful results. Prior to the opener, however, Kevin John at Holiday Sports in Burlington (360-757-4361) predicted that this weekend could see enough of the highly-sought salmon in the lake to be worth an early trip.

John said that, through Sunday, some 2,617 fish had been trapped below Baker Dam, and 1,931 had been transported to the lake.

“Compare that to last year,” John said, “when there were only 600 or 700 in the lake at this point, so there may be enough biters on hand to make the first weekend fishable.”

The upper third of the lake is the traditional fishing area, north and/or east of the bend. John said the lake is a little colder this year, which would tend to keep the sockeye fairly shallow — at least until the fleet hounds them into deeper water. John said the bulk of the catch will probably come from 15 or 20 feet of water for the first couple of weeks or so, which means that a 6-ounce crescent sinker should get your gear into their faces about as well as a downrigger. That’s especially true when holding your speed down to the critical very slow troll.

The hoochie can be UV pink, John said, maybe dressed up with a smile blade or a red or pink size 8 or 10 Spin N Glo. John likes dodgers in UV white, UV purple haze, or 50-50.

“The two-pole endorsement on your license is legal on Baker and a good idea,” John said. “these are school fish and when you find ’em, you need as much gear in the water as possible.”

He said that the saltwater “boat limit” is in effect, meaning basically that the guy who still hasn’t boated his limit can continue to fish everybody else’s rods.

Check out the current trap counts at http://wdfw.wa.gov/fishing/salmon/sockeye/baker_river.html.

The first sockeye of the year passed Tumwater Dam on the Wenatchee River Monday, according to state biologist Travis Maitland, signaling the start of the Lake Wenatchee run. Maitland said predictions are for fewer fish this year than during the banner 2012 season (over 66,000 fish at Tumwater), but he still is hopeful of something in the 44,000 to 50,000-fish range, which would be a solid run and which would allow a recreational fishery.

Last year’s excellent season started with a three-fish daily limit, but that was bumped up to five fish in a total sport harvest of over 12,000 sockeye.

Maitland said he should have enough hard data from the dam counts by late next week to come to some decision on the possibility of a fishing season. If a season is announced, he said, it would probably open in early August.

The first week of summer salmon fishing in the San Juan Islands has been much better than what anglers found there last year, according to Kevin John at Holiday Sports in Burlington. It’s off to a great start, he said, particularly inside Rosario Strait in such hot spots as Decatur Bay, Thatcher Pass, Reef Point, Eagle Bluff and Obstruction Pass.

The kings are running 10 to 20 pounds and whacking gear such as Coho Killer and Kingfisher spoons in “whie lightning” pattern; UV hoochies; AceHi flies; and herring or anchovies in a helmet.

On the July 1 opener, 123 anglers were contacted by WDFW personnel at the Washington Park ramp in Anacortes, with 42 chinook and 1 coho. On Sunday, at the same spot, it was 29 anglers with 8 chinook. At the Cornet Bay ramp on Sunday, 41 anglers had14 chinook.

Not hot yet, but a few sockeye and summer chinook are being caught in the upper Columbia. The run will build in coming weeks, according to Anton Jones of Darrell & Dad’s Family Guide Service in Chelan, below Wells Dam and off the mouth of the Okanogan River above Brewster. For the kings, pull a Hot Spot flasher and a Super Bait stuffed with oil-pack tuna and coated liberally with your favorite sauce. Jones likes Pautzke’s Krill Juice.

The latest state catch sampling, through June 30, showed Ilwaco as the hot spot on the coast, averaging better than a salmon and a third per rod, mostly coho. At Westport it was a half-fish per person, about 50-50 coho and chinook; and at LaPush, one fish per rod, split between coho and chinook.

Some 22 boat fishermen kept 6 steelhead last week and 20 bank anglers landed 3 adult spring chinook on the Cowlitz, all between the two hatcheries.

The Dalles pool has been offering hot fishing recently, according to Joe Hymer with the state. Boat fishermen averaged 2.5 walleye per person last week and over 6 bass when including fish released.

More than six-million pinks are expected to migrate into the Strait of Juan de Fuca and Puget Sound this summer, and the Cabela’s Tulalip Store at 9810 Quil Ceda Blvd. in Tulalip is hosting a pink salmon fishing seminar July 13-14.

For more information, go to www.cabelas.com/tulalip. 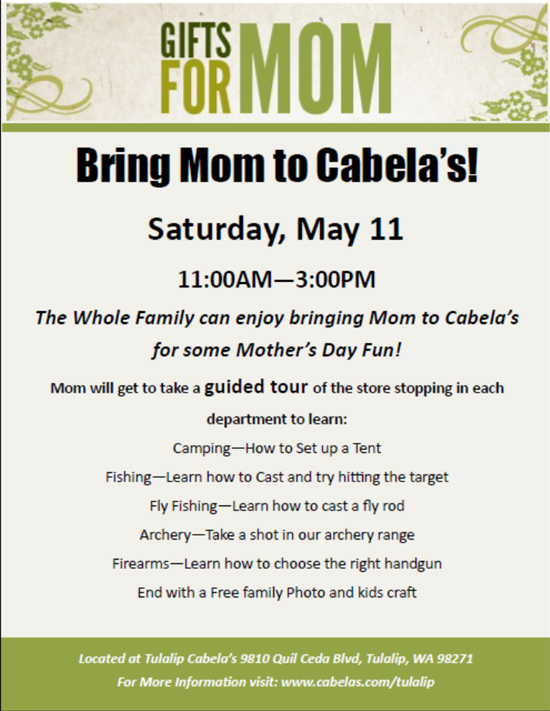 Want to learn how to cast a fly rod? Or maybe shoot a gun?

The Tulalip Cabela’s is having a day for women to do all that — and cook.