Abby Abinanti metes out a more community-based form of justice for tribal members — starting with the question, ‘Who’s your mom?’

As chief judge of the Yurok Tribal Court, Abinanti wears no robe. On this day, she’s in jeans and cowboy boots, her silver hair spilling down the back of a black down vest. In contrast to her longtime role as a San Francisco Superior Court commissioner, she doesn’t perch above those who come before her; she shares a table with them.

“Hi, big guy. How are you doing?” she softly prods a 29-year-old participant in her wellness court, which offers a healing path for nonviolent offenders struggling with substance abuse.

Abinanti has watched Troy Fletcher Jr. battle bipolar disorder and methamphetamine addiction, land in jail and embrace recovery under the tribe’s guidance. She’s known his grandmother since before he was born.

Though that would be cause for recusal in the state system, here it’s pretty much the point. Her most common question for court newcomers: “Who’s your mom?”

“Here we have a village society,” Abinanti says of California’s largest tribe, “and the people who help you to resolve your problems are the people you know.”

Native American jurisprudence has evolved since tribes began to regain their sovereignty, returning to traditional values of respect, community support and responsibility, and collective healing — for victims, perpetrators and the circle of lives they touch.

Abinanti, who in 1974 became the first Native American woman admitted to the State Bar of California, has been at the forefront. 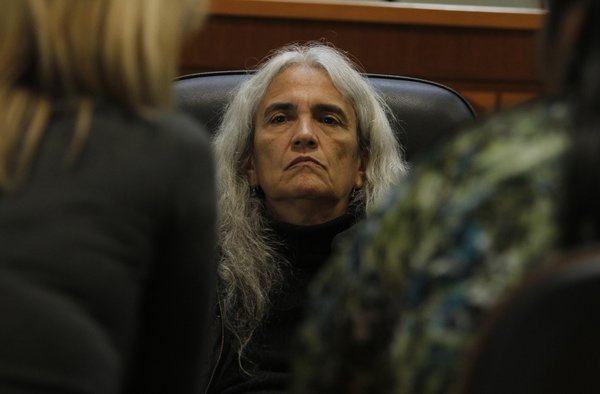 “When you’re looking to heal, you look wherever you can to find medicine, and one of those places is in the culture and practices of the community,” says retired Utah appellate court Judge William A. Thorne Jr., a Pomo-Coast Miwok who teamed with Abinanti in the 1980s to train tribal court personnel nationwide.

Now, at 66, Abinanti has returned to her home on sacred Requa Hill above the fog-wisped mouth of the Klamath River. (Though she tried to retire from the San Francisco bench in 2011, she was recently asked to return every other week, so she commutes.)

“What happened is we lost touch with our responsibilities,” Abinanti says. “You take responsibility for what you did…. And if you can ask for help, I’m willing to give you a hand. I won’t ever say you’ve used up your chances.”

Abinanti speaks often of “historical trauma” — wounds passed wordlessly through generations with an accumulating grief and the urge to salve it with alcohol and drugs. It is what Yurok tribal Chairman Thomas O’Rourke calls “the sickness of this land.”

Her family had its share. Her maternal grandfather, Marion Rube, was described in press accounts as among “the notorious criminals of early California.” Captured after a 1922 bank heist, he escaped six years later from a San Quentin prison road camp and was shot to death in southern Oregon.

Ostracized, his wife and three daughters fled their village. The girls were shipped off to government-run boarding school. Sorrow shadowed them; harsh deaths claimed them. One, intoxicated, froze in a snow bank; another, newly sober, caught on fire after backing into a heater. Abinanti’s mother, who struggled with alcohol, depression and forced electroshock treatments, died while detoxing.

Her history, rarely shared, informs Abinanti’s compassion. “It’s painful to be a drunk, to not meet your promises, to not look your kids in the eye,” she says. “To disrespect them on top of that doesn’t do any good.”

Abinanti was studying journalism at Humboldt State University when she saw a flier for a program for Native American students at the University of New Mexico School of Law.

Thorne met her in 1975 when he was interning at the Ukiah office of California Indian Legal Assistance. Just two years out of law school, she was the group’s board president.

“In walked this powerful Indian woman,” Thorne recalls. “She was this image of what I could seek to become, an Indian person who was a force to be reckoned with and yet just very kind.”

Appointed to the San Francisco bench two decades ago, she has specialized in family court and juvenile dependency. She has also served as a judge or magistrate for four other Western tribes.

She first came home to Yurok country in 1978 to set up the tribe’s fishing court, then again in 1993 when the tribe earned federal recognition. The Yurok Tribal Court was launched three years later, and in 2007 she became its chief judge.

Among her innovations: the first tribal-run program in the nation to help members expunge their criminal records; and California’s first tribal child support program, which allows for non-cash alternatives to support payments — such as donations of fish or manual labor.

Yet her greatest impact has arguably come through wellness court. Some participants seek out the program on their own in the course of recovery; others, like Fletcher, come through a rare partnership with the state criminal justice system: Abinanti’s decades on the bench have earned her crucial credibility with judges, prosecutors and probation officials, allowing her staff to pull tribal members out of criminal court and bring them home.

Fletcher was facing an arson charge for burning brush when a tribal court attorney secured his release from a Eureka jail cell in a pre-trial diversion agreement and brought him into Abinanti’s program. He is now stable on psychiatric medication, off meth and in a sober-living home.

“I used to be afraid to go into court, afraid that they were going to take something from me,” Fletcher says outside tribal headquarters, his large hands working a rope into a monkey’s fist. “Here, they’re trying to give something back.

“I’ve got the whole tribe behind me,” he adds. “When I have to answer to my people, it makes me want to do better.”

Abinanti never swears in witnesses, explaining: “If you’re Yurok and you lie, that’s on you.”

On this day, her general court is in session, arranging restitution for various infractions. Participants can demand a trial, but most tend to tell Abinanti what they did. Then they talk about how to best “settle up.”

So it goes with Taos Proctor, 32. Towering and broad-chested, with full-sleeve tattoos, he sits across from Abinanti, looking unhappy. His violation: fishing after the season had closed.

Of 73 fish seized, she orders that 53 be donated to a program for elders. The rest, which belonged to a relative of Proctor’s, will be returned to him to give back to the rightful owner.

Proctor is also a wellness court client. Though Abinanti pokes him harshly with a long finger during a court break and quips to a visitor that he has “the manners of a stump,” she is fiercely proud of him.

Pulled into the meth life, he was committed to a county boys’ ranch at 16. Next came the California Youth Authority and prison. Released at 25, he bounced in and out of jail before he found himself facing a third strike.

The charge turned out to be unsubstantiated, and with help from the tribal court’s criminal attorney, he pleaded to a lesser count. It marked the first time Del Norte County Superior Court Judge William H. Follett agreed to hand a felony case to wellness court as a condition of probation.

“I know I can trust her,” Follett says of Abinanti. “If people are continuing to not do their program or to do drugs, she’ll know to send them back…. She’s taught me that there’s another way of doing things.”

Proctor became a fish buyer, took a job felling trees and, at Abinanti’s insistence that he give back, hosts a weekly Narcotics Anonymous meeting. He has been off meth for 15 months.

“Judge Abby knows me. She works with me,” he says. “I’ve still got a lot of issues that I’m working on, but I don’t have to hide them anymore.”

Court staff members are pulling for him. “I don’t want to let them down,” Proctor says. “I want to help my community because for so long, I didn’t.”

Abinanti also presses participants to remember — or discover — what it means to be Yurok. It’s a journey the tribe is taking collectively, as the language and ancient dances are revived.

On a recent day, she asks one man who has been drumming and stoking the fire at sweat lodge ceremonies if he’d listened to the CDs of Yurok songs she had compiled for him.

Abinanti could use a rest. Next to her armchair is a stack of books she longs to devour. But important work remains.

Of more than 5,000 Yurok tribal members, only a handful are bar-certified attorneys; and of the attorneys working for the tribal court, Abinanti is the only Yurok.

The tribal council recently approved a pilot project that Abinanti brokered with online Concord Law School- Kaplan University. Under the agreement, 10 tribal members will enroll by September, receiving tailored supervision to help them pass the bar exam. Four began last month. In return for tuition, which Abinanti must now raise from donors, participants agree to continue working for the tribe for five years once they pass the bar.

“I don’t want to be diverted,” she says. “I want to do what needs to be done at home that right now only I can do. If I do a good job, then that won’t be true anymore…. I’m here. I need people behind me.”

She knows, after all, that she won’t be around forever.

One day Abinanti will be buried next to her, and she hopes the resting place — filled with the music of the Pacific — ends the suffering of her maternal family line.

“She deserves some peace.”