Contempt of court charges against Dusten Brown, Veronica’s birth father, have been dropped, according to an Oklahoma newspaper.

Veronica, now 4 years old, was caught in the middle of an internationally publicized custody dispute involving her Native American heritage.

Brown, who lives in Oklahoma, faced contempt charges for refusing to comply with a Charleston County Family Court order to return Veronica to her adoptive parents, Matt and Melanie Capobianco of James Island.

The court dropped that charge Thursday, according to the Tulsa World.

Gov. Nikki Haley dropped efforts to extradite him, but the warrant is still active.

Brown also remains part of an Oklahoma civil case in which the Capobiancos’ attorneys are seeking to recoup more than $1 million in fees and legal expenses incurred during the custody battle.

Veronica’s birth mother gave her up for adoption to the Capobiancos shortly after she was born in September 2009.

Brown, who is part Cherokee, said his daughter was given up without his knowledge when he was getting ready to deploy to Iraq. Veronica’s mother argued he wasn’t involved in her life.

With the help of attorneys from the Cherokee Nation, Brown sued for custody under the Indian Child Welfare Act, which was designed to keep Native American families intact. Brown gained custody in December 2011, when Veronica was 27 months old.

The Capobiancos appealed to the U.S. Supreme Court and were reunited with Veronica last September, when she was 4.

It is unclear whether Matt and Melanie Capobianco, the James Island, S.C., couple attempting to adopt the child, have actually met with the girl and if so, how often, since arriving in Oklahoma two weeks ago. 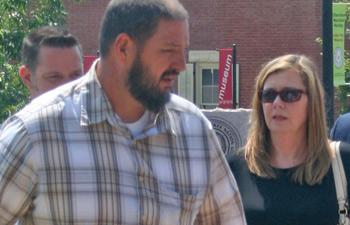 Matt and Melanie Copabianco (back left and right) arrive at Cherokee Nation Courthouse on Aug. 16 for a custody hearing involving a 3-year-old Cherokee girl they are trying to adopt.
LISA SNELL | NATIVE TIMES PHOTO

TAHLEQUAH, Okla. – A motion is now on file to suspend any visits between a non-Native South Carolina couple and the three-year-old Cherokee child they have been attempting to adopt for almost four years.

According to docket sheets posted Sunday on the On Demand Court Records system, Angel Smith, the court-appointed attorney for Cherokee Nation citizen Veronica Brown, filed the motion Friday in Cherokee County District Court, along with a request for a hearing to revisit the matter.

Smith was appointed in Cherokee County District Court on Aug. 19 after representing the child in Cherokee Nation District Court for almost a month. She is also Brown’s representative in a federal lawsuit filed last month by the Native American Rights Fund, the National Indian Child Welfare Association and the National Congress of American Indians.

It is unclear whether Matt and Melanie Capobianco, the James Island, S.C., couple attempting to adopt the child, have actually met with the girl and if so, how often, since arriving in Oklahoma two weeks ago. The Capobiancos were awarded custody of the child last month by a South Carolina family court judge, but the order has not been enforced in Oklahoma.

Oklahoma Gov. Mary Fallin has threatened to sign off on an extradition warrant for Veronica’s biological father, Dusten Brown, if he did not allow the couple to see the girl. Brown is wanted in South Carolina for custodial interference after missing a court-ordered visitation with the Capobiancos and an adoption investigator earlier this month while he was at National Guard training in Iowa. He has since turned himself in to Sequoyah County law enforcement and has a hearing scheduled for Sept. 12 in Sallisaw.

Along with Smith’s motions, the Capobiancos have filed their own motions with the court objecting to the appointment of a guardian ad litem to represent Veronica Brown’s best interests during the court proceedings, as well as their objection to Smith’s appointment as the three-year-old’s lawyer.

Additionally, special judge Holli Wells entered an order of recusal Friday, excusing herself from future proceedings in the case.

Thanks to a gag order issued by both the Cherokee County District Court and the Cherokee Nation District Court and a seal on all related documents, no details are available about the flurry of Friday filings other than the docket sheet line items. Earlier this month, the two sides agreed to mediation, but it is unclear whether those talks have started and if so, how they have progressed. It is also unclear what, if any, challenges were filed in Oklahoma to the South Carolina family court’s order granting custody to the Capobiancos. Under Oklahoma statute, Brown and his attorneys had until Friday to do so.