A judge finds that the city failed to turn over emails requested by Cedar Grove Composting as public records.

EVERETT — The city of Marysville was ordered Monday by a judge to pay more than $143,000 to Cedar Grove Composting for violations of the state public disclosure law.

The Everett composting company last year sued Marysville in Snohomish County Superior Court over the city’s withholding of emails between it and a consultant.

In an unusual move, Judge Richard T. Okrent also ruled that the city should have disclosed emails related to Cedar Grove that were sent internally at the consulting firm, Strategies 360.

Cedar Grove officials did not respond Monday to an email seeking comment.

The city of Marysville, the Tulalip Tribes and many who live in Marysville and Everett have been battling Cedar Grove for several years over allegations that the company’s Smith Island plant has been emitting offensive odors in the area.

Strategies 360 was performing public relations work for Marysville related to the issue.

The consulting firm already had been hired by the city to lobby on transportation and other issues and had been paid a flat rate of $7,500 per year for all the combined work, according to city administrator Gloria Hirashima.

Last year, Cedar Grove filed a public disclosure request with the city for all written communications with Strategies 360 related to the composting company. The city supplied most of the emails but withheld a number of them, claiming they were exempt from public disclosure because of attorney-client privilege. The emails contained discussions of legal strategy, Hirashima said.

Okrent ruled that 15 of those emails did not meet that standard. Though Marysville released the emails before Cedar Grove filed the lawsuit, the city should have released them sooner, the judge ruled.

The emails contained possible strategies and approaches, some of which the city used and some it didn’t, Hirashima said. For example, the city acted on the consultants’ suggestion to have city and Tulalip tribal leaders send letters to elected officials, she said.

The emails also revealed that the city and Strategies 360 helped residents write letters to newspapers and with other activities, such as applying for grants, according to the original complaint by Cedar Grove.

Hirashima said there’s nothing wrong with that in itself.

“We had literally hundreds of citizens asking us for help on this issue,” she said.

Mike Davis, leader of the Cedar Grove opposition group Citizens for a Smell Free Snohomish County, acknowledged he had help with letter writing but said he took the initiative.

“Any implications that we were created by the city of Marysville or that they ran the citizens group is not true,” he said. “I went to my elected officials as any citizen should. We were offered and gladly accepted help from the city. Fix the smell, I go away, it’s that simple.”

Also, Okrent ruled the city was negligent in failing to track down 19 other emails in response to Cedar Grove’s disclosure request.

Marysville also should have released internal Strategies 360 emails pertaining to Cedar Grove, the judge wrote in the ruling signed on Monday. The firm was acting as an employee of the city on the matter, he said.

The attorney working on the case for Marysville, Jeff Myers of Olympia, said the ruling broke new legal ground.

“I think it caught everyone by surprise that the court did what we thought was an unprecedented extension of the public records act to records the city never had,” Myers said. “Those were things the city never saw, didn’t possess and some of it was done for other clients.”

Myers said he’s specialized in public disclosure law for nearly 10 years and “it’s the first time to my knowledge it’s been done anywhere,” he said of the ruling.

Hirashima said the ruling sets an ominous precedent in terms of how the city and other government agencies must respond to disclosure requests in the future.

“This is a distraction from trying to get the (odor) issue addressed,” she said. “There are tools Cedar Grove has to inflict punishment back.”

Cedar Grove two years ago was fined $119,000 by the Puget Sound Clean Air Agency for odor violations at its plants in Everett and Maple Valley in King County.

That amount was applied toward Cedar Grove’s $200,000 contribution to a $375,000 study of odors in the Snohomish River Delta run by the Clean Air Agency. 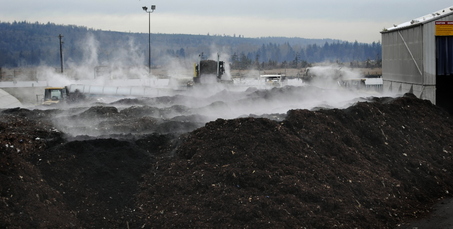 By Bill Sheets, the Herald

EVERETT — As the weather keeps heating up, so again are the complaints against Cedar Grove Composting.

The citations bring the total to 13 in the past five years for Cedar Grove. The plant has received numerous other odor complaints during that time from people living in Marysville and north Everett. The company also has received four written warnings in those five years.

A Cedar Grove official said information from its odor monitors contradict the clean air agency’s information regarding the June 6 complaints. As of Friday the company hadn’t yet received the violation notices for June 25, company spokeswoman Susan Thoman said in an email.

“Our on-site electronic odor monitoring system indicated that no detectable odors left our property during the time cited by the (notices for June 6),” Thoman wrote. “We plan to share this monitoring information with the agency.”

The notices won’t necessarily result in disciplinary action against the company.

“It’s up to our supervisors to be able to work through that with Cedar Grove,” Todd said. “And they can appeal it.”

These citations were the first for Cedar Grove in 2013, Todd said.

In 2011, the company was fined $169,000 for odor violations going back several years at both its Everett plant and its plant in Maple Valley, King County.

The company appealed those fines to the Puget Sound Growth Management Hearings Board, a state regulatory panel. The fines were upheld but the board knocked $50,000 off in deference to Cedar Grove’s expenditures on measures to curb the odors.

The board said Cedar Grove to that point had spent $6.5 million on odor control at the two locations combined, some of it voluntarily and some as a result of earlier violations.

Cedar Grove collects yard and food waste from hauling companies in much of Snohomish and King counties and grinds it, cures it and sells it for compost in gardens.

In past years, complaints often have spiked early in the summer, corresponding with an increase in volume of waste being brought to the plant at Smith Island.

Cedar Grove officials have said other sources could be causing the odors. The remainder of Cedar Grove’s fine from 2011 — $119,000 — was put toward an odor study last year by the clean air agency.

The study will combine information from 10 electronic odor monitors, called “e-noses,” and recorded impressions from volunteers in an attempt to scientifically determine the source of the offensive stench.

The total cost of the study is $375,000.The city of Seattle and King County, which both have sent yard and food waste to Cedar Grove for composting, are putting up $100,000 and $50,000, respectively. The city of Seattle recently decided to end its arrangement with Cedar Grove effective next spring. The clean air agency is spending $25,000 on the study.

Four monitors are located at Cedar Grove, having been purchased previously by the company. One monitor each also has been placed at the wastewater treatment plants operated by Everett and Lake Stevens; the Cemex plant in north Everett; the clean air agency’s weather station in central Marysville; one at a volunteer’s home in Marysville and another at a home in Everett.

The results of the study are expected later this year.