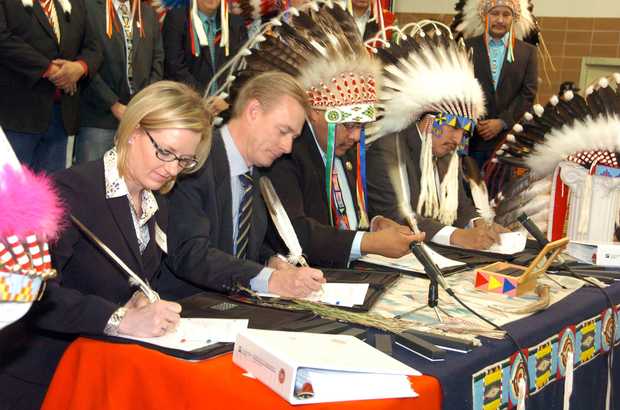 Lummi Nation, which has fished the waters off Cherry Point for centuries, and Crow Nation, a tribe in Montana sitting on billions of tons of coal, have taken opposite stances on a proposed coal terminal on the Lummis’ historic fishing grounds.

Crow Chairman Darrin Old Coyote wrote the U.S. Army Corps of Engineers on Jan. 20, asking the federal agency to bring the two tribes together to discuss Gateway Pacific Terminal.  The Crow letter was in response to request on Jan. 5 from Lummi Nation to the Corps, asking the agency to reject the terminal because it interfered with the Lummis’ ancient fishing practices, which were reinforced in U.S. law by an 1855 treaty.

The terminal is currently under environmental review.

“We are concerned about recent news reports that Lummi is asking the (Corps) to stop the environmental review process based on perceived impacts to their treaty fishing rights,” Old Coyote wrote.

In its  response, dated March 10, the Corps said it would not organize meetings between the tribes. The agency suggested the Crow ask the Bureau of Indian Affairs.

“The Corps wouldn’t be the appropriate agency to facilitate such a meeting,” Corps spokeswoman Patricia Graesser said on Friday, March 20, in an email to The Bellingham Herald.

Leaders at Crow Nation were not available for comment on Friday.

The Corps said it would meet a different request from the Crow, to keep the tribe informed about the Corps’ review of Gateway Pacific Terminal and to include in that review, when appropriate, the Montana tribe’s position.

What’s at stake for Crow Nation is the 2013 agreement between the tribe and Cloud Peak Energy that would allow the mining company to extract 1.4 billion tons of coal from Crow land. The deal has already enriched the Crow by at least $3.75 million and would be worth millions of dollars more, depending on the amount of coal mined.

That, in turn, could depend on whether Gateway Pacific Terminal is built. Coal that would pass through the Cherry Point terminal would come from Montana and Wyoming.

“The Gateway Pacific Terminal project will ensure access to markets for Crow coal,” the tribal chairman’s letter said. Old Coyote has said in media reports that two-thirds of the Crow’s budget comes from coal revenue.

The Lummis have hosted the Crow at Cherry Point and have told the Montana tribe about the anticipated disruptions to Puget Sound fishing areas, Lummi Chairman Tim Ballew said.

“We’ve done extensive fact finding with other governments, including the federal government and other tribes,” Ballew said in an interview on Thursday, March 19. “We’ve come to the decision that our treaty right cannot be mitigated.”

“We have an explicit treaty fishing right that the Corps needs to respond to,” Ballew added. “That letter and request from the Crow is not a setback.”

The Lummis  on March 5 sent the Corps details about the tribe’s fishing practices in response to a request from the Corps for more information, to support the tribe’s Jan. 5 request that the coal terminal be stopped. Ballew said Thursday the tribe had not yet heard back from the Corps.