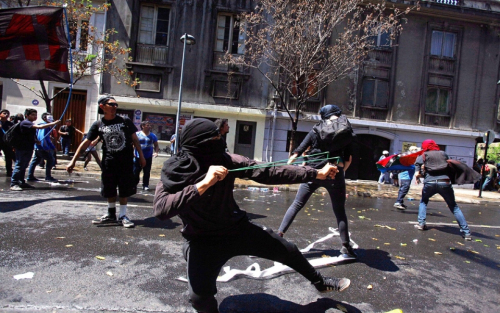 Some of the protesters threw rocks and other objects at police after the main, peaceful march earlier Saturday. Photo: Luis Hidalgo/AP

Protesters clashed with police in Chile’s capital Saturday during an anti-Columbus Day march organized by Indigenous groups, with activists calling for the return of ancestral lands and the right to self-determination on the 521-year anniversary of the arrival of Christopher Columbus to the Americas.

Demonstrators in Santiago threw rocks and other objects at police who responded with water cannons. At least 10 protesters were detained by police, local media reported.

More than 15,000 people participated in the march, organized by the country’s largest indigenous group, the Mapuches, who have been in a long struggle with the government over ancestral land taken from them during colonization.

While Columbus Day celebrations took place across Latin America, the Mapuche affirmed, “we have nothing to celebrate”, according to the Santiago Times.

A press release by the group complained of mistreatment by the state, particularly against Mapuche political prisoners, and on-going land disputes in the south.

On Wednesday, a major police operation cleared indigenous occupants from disputed land in Ercilla, in southern Chile, and eight Mapuche activists were arrested. Witnesses said the police response was aggressive and unprovoked, the Santiago Times reported.

The Mapuche people have been fighting to accelerate the process of repatriation of traditional lands. The government has said it will return some of the land, but the process has been slow and the perceived inaction has been met with demonstrations and occasional violence.

Mapuche protesters have been treated as ‘terrorists’ by the Chilean government — which uses an anti-terrorism law against them. Thousands of Mapuche and their supporters demanded an end to the application of this law on Mapuche land activists in peaceful marches Saturday.

The U.N. urged Chile to stop applying the anti-terrorism law against the Mapuche in July.

“The anti-terrorism law has been used in a manner that discriminates against the Mapuche,” U.N. Special Rapporteur on human rights and counter-terrorism Ben Emmerson said in a press release. “It has been applied in a confused and arbitrary fashion that has resulted in real injustice, has undermined the right to a fair trial, and has been perceived as stigmatizing and de-legitimizing the Mapuche land claims and protests.”

Though the Mapuche resisted Spanish conquest for 300 years and wish to be autonomous, in the late 19th century they were defeated militarily and forced into Araucania, south of the Bio-Bio river — about 350 miles south of Santiago. Most live in poverty on the fringes of timber companies or ranches owned by the descendants of those who arrived to the region in the late 1800s from Europe.

“Indigenous people are in resistance because we are survivors after 500 years of the European invasion,” Leonico Macuixle, a demonstrator, told The Associated Press. “They came to take from us our culture, our language, they built Catholic churches in our sacred places.” 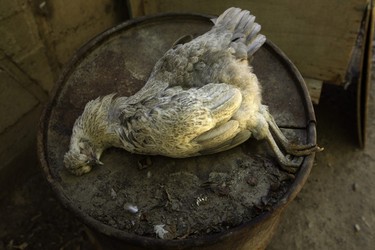 In this May 23, 2014 photo, a chicken carcass lies on top of a tank found by grape grower Pascual Abalos Godoy on his morning rounds, who believes the chicken died from drinking contaminated water, in El Corral, near the facilities of Barrick Gold Corp’s Pascua-Lama project in northern Chile. The residents living in the foothills of the Andes, where for as long as anyone can remember, have drunk straight from the glacier-fed river that irrigates their orchards and vineyards with clean water. Since the Barrick gold mine project moved in, residents claim the river levels have dropped, the water is murky in places and complain of health problems including cancerous growths and aching stomachs. (AP Photo/Jorge Saenz)

SANTIAGO, Chile — Chile’s Diaguita Indians are asking the country’s supreme court to require the world’s largest gold mining company to prepare a new environmental impact study for an $8.5 billion mine that straddles the mountaintop border with Argentina.

The Indians already won an appellate ruling that requires Barrick Gold Corp. to keep its previous environmental promises and says the watershed below the Pascua-Lama project is in “imminent danger.”

The Canadian company has publicly promised to do any work required.

But Soto says his 3,000 plaintiffs want Barrick to apply for a new permit that takes into account their anthropological and cultural claims to the watershed below the mine.

Barrick told The Associated Press it had no immediate comment on the court filing.

Copyright 2013 The Associated Press. All rights reserved. This material may not be published, broadcast, rewritten or redistributed. 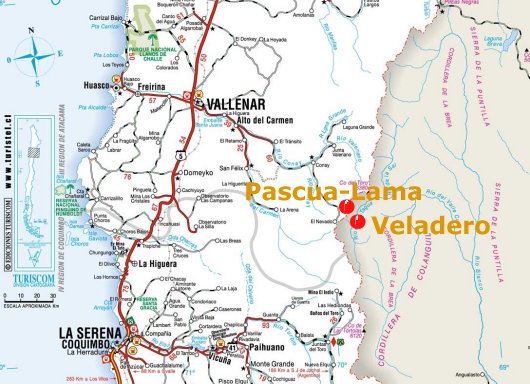 A Chilean appeals court ruled against the world’s largest gold mining company on Monday, favoring Chilean Indians who accuse Barrick Gold Corp. of contaminating their water downstream and creating more doubts about the future of the world’s highest gold mine.

The judges in the northern city of Copiapo unanimously ruled that Barrick must keep all its environmental promises before moving forward with construction of the Pascua-Lama mine at the very top of Chile’s mountainous border with Argentina. They also said Barrick must monitor the condition of three glaciers next to the mine project.

Chile’s environmental watchdog agency already ordered construction stopped until Barrick builds systems to keep the mine from contaminating the watershed below, and Barrick executives have publicly committed the company to fulfilling the requirements of its environmental permit.

But Monday’s ruling goes beyond that by demanding repairs to damage in the watershed below, by calling for increased monitoring of the impact on surrounding glaciers, and by opening up the project’s environmental license for review. The judges found no evidence of contamination due to mine construction, but said the watershed could face “imminent danger” without more environmental protections.Attorney Lorenzo Soto, who represents about 550 Diaguita Indians in the case, said this review might even kill the $8.5 billion mine, which has been under development for more than seven years. “The project’s conditions aren’t the same as they were in 2006. New conditions could be established, and we don’t discard any scenario, including the closing of the project,” Soto said.Scarce river water is vital to life in Chile’s Atacama Desert, and the Diaguitas fear that the Pascua-Lama mine above them is ruining their resource.Barrick acknowledged the ruling in a statement late Monday that did not say whether or not the company would appeal.

The company said it “is committed to diligently working to complete all of the projects the regulatory requirements” and is working with Chile’s environmental regulator to construct a water management system by 2014, after which time it expects to renew construction on the actual mine.

Still, the ruling could mean more lengthy delays for the binational mine, which was initially expected to be producing gold and silver already. While Argentine officials are eager to keep building, most of the ore is buried on the Chilean side. On the Argentine side, where Barrick fuels a third of San Juan province’s economy, officials have been watching closely and trying to figure out how to preserve thousands of jobs.

Barrick’s stock traded up slightly Monday at $15 a share after reaching near-historic lows due to falling gold prices and Pascua-Lama setbacks.