Washington geoduck farmers and harvesters have turned to politicians to help overturn a Chinese shellfish-import ban that’s all but shut down the local industry.

Washington geoduck harvesters and government officials, including Gov. Jay Inslee, are scrambling to overturn China’s decision to ban some shellfish exports from the Pacific Northwest.

The ban has brought the geoduck industry here to a virtual halt.

Fish inspectors in China notified the U.S. Embassy on Dec. 3 that China was tentatively suspending imports of geoduck and other “double-shell aquatic animals,” such as oysters, because they found high levels of paralytic shellfish poisoning, or PSP, in a Nov. 21 shipment of geoducks.

PSP is a biotoxin produced by algae that shellfish eat and, in humans, in high levels it can lead to severe illness and even death.

The ban is a particularly nettlesome problem in Washington because China accounts for about 90 percent of geoduck exports from the state. And fisheries in the state harvest and farm 5.5 million to 7 million pounds of geoduck annually, according to Taylor Shellfish Farms, one of the state’s largest geoduck providers. Those companies generally sell geoduck, which is a burrowing clam, for between $7 and $25 a pound.

Local fish companies, though, are struggling to understand the ban because testing by the Washington State Department of Health in the area where the geoduck shipments originated found PSP levels well below internationally accepted limits.

“We’ve gone back and looked at all records — they show results way below any human-health concern,” Donn Moyer, a health-department spokesman, said Saturday. “We don’t have any evidence or information whatsoever about any high levels of PSP in any shellfish.”

Geoduck harvesters believe the Chinese inspectors applied a standard for the level of toxicity that is well below what is considered safe for humans.

To compound the challenge, communication from the Chinese government has been scant. State regulators and fishery executives say they have heard nothing more from the Chinese since the Dec. 3 notification. Press officials from the Chinese embassy in Washington didn’t respond to an email query Saturday.

That’s led the industry to turn to political leaders to resolve the issue. On Friday, the governor and Commissioner of Public Lands Peter Goldmark sent a letter to the heads of the Food and Drug Administration and the National Oceanic and Atmospheric Administration asking them to engage in “direct interaction with the Chinese government” to determine the status of the ban and to gather information about the Chinese inspection.

In the meantime, local geoduck harvesters and farmers are curtailing operations. Suquamish Seafoods, which sends all of its geoduck, between $2 million and $3 million a year, to China, has idled its 24 divers.

“This is unprecedented,” Forsman. “The tribe really depends on it.”

Taylor Shellfish Farms, which sells some geoduck domestically, has had to reduce hours for its workers. And if the Chinese ban continues much longer, prices for geoduck sold domestically will drop because of a market glut.

“That may have an impact on domestic prices,” said Bill Dewey, Taylor’s director of public policy and communications. 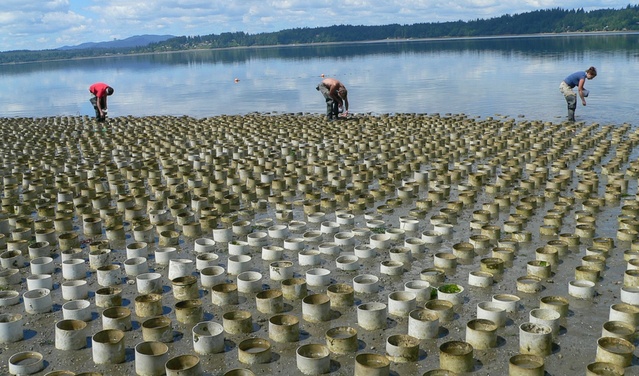 By ASHLEY AHEARN AND KATIE CAMPBELL AND ANTHONY SCHICK

China has suspended imports of shellfish from the west coast of the United States — an unprecedented move that cuts off a $270 million Northwest industry from its biggest export market.

China said it decided to impose the ban after recent shipments of geoduck clams from Northwest waters were found by its own government inspectors to have high levels of arsenic and a toxin that causes paralytic shellfish poisoning.

The restriction took effect last week and China’s government says it will continue indefinitely. It applies to clams, oysters and all other two-shelled bivalves harvested from the waters of Washington, Oregon, Alaska and Northern California. U.S. officials think the contaminated clams were harvested in Washington or Alaska. Right now they’re waiting to hear back from Chinese officials for more details that will help them identify the exact source.

State and federal agencies oversee inspection and certification to prevent the shipment of tainted shellfish. Jerry Borchert of the Washington Department of Health said he’s never encountered such a ban based on the Chinese government’s assertion that these U.S. safeguards failed to screen out contaminated seafood.

“They’ve never done anything like that, where they would not allow shellfish from this entire area based on potentially two areas or maybe just one area. We don’t really know yet,” Borchert said.

The biggest blow could fall to those who farm or harvest the supersized geoduck clams. In the Northwest, they’re concentrated in Washington’s Puget Sound, where about 5 million pounds of wild geoduck are harvested each year. Aquaculture accounts for an additional 2 million pounds, according to estimates from the Washington Department of Natural Resources. 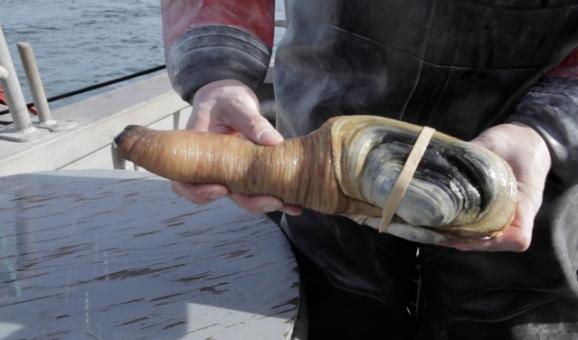 Blake Severns inspects a wild geoduck just plucked from the bottom of Puget Sound. Severn is a diver with the the Washington Department of Natural Resources Aquatics Resource Division.
Courtesy of KOUW news

A barricade around the Chinese consumer market means trouble for those in the Northwest who rely on Asian trade.

The U.S. exported $68 million worth of geoduck clams in 2012 — most of which came from Puget Sound. Nearly 90 percent of that geoduck went to China.

Geoduck are highly prized in China, where the clams sell for retail prices of $100 to $150 per pound. Although geoduck are harvested year round, demand peaks during the holiday season leading up to the Chinese celebration of the lunar new year — which falls on Jan. 31 for 2014.

The geoduck (pronounced “GOO-ee-duck”) is a the world’s largest burrowing clam. It’s slow-growing, regularly reaching 100 years old and often weighing as much as 10 pounds.

Harvesters are waiting for the National Oceanic and Atmospheric Administration to negotiate with the Chinese government to come to an agreement on how to move forward and reopen shellfish trade. NOAA stopped issuing certification for shellfish exports last Friday.

Officials say the investigation is ongoing but the closure could last for months. While the industry awaits a resolution at the international level, it is adjusting to the new reality.

The Suquamish Tribe is trying to develop other markets in New York, California and locally at seafood markets in Seattle, Hill said.

Bill Dewey, a spokesman for the largest shellfish supplier in Washington said his company, Taylor Shellfish, is looking at other solutions.

“I was just talking to our geoduck manager and he’s got two harvest crews and three beach crews essentially doing makework,” Dewey said. “He’s too nice a guy to lay them off during the holidays but there’s only so much you can be charitable about making work for people and eventually you’re going to have to lay them off.”