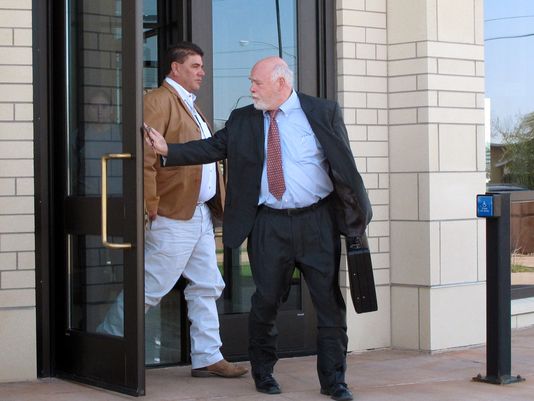 The charges against Chippewa Cree Business Committee member John “Chance” Houle and former chairman Bruce Sunchild are the latest in an ongoing federal investigation into corruption on Montana’s Indian reservations. The investigation already has resulted in a round of convictions at Rocky Boy earlier this year, including a guilty plea by state Rep. Tony Belcourt in April to theft, bribery and tax-evasion charges.

Larry Denny, a spokesman for the tribe, said he was unaware of the charges against Houle and Sunchild, and he declined to comment.

Houle was originally indicted with Belcourt in 2013, but federal prosecutors dropped the charges against him without explanation. In three new indictments unsealed Tuesday, Houle faces 10 charges that include conspiracy to embezzle tribal funds, theft, bribery and obstruction of justice.

Houle received nearly $307,000 between 2009 and 2011 in exchange for contracts he awarded Hunter Burns Construction Co., which was partly owned by James Eastlick Jr., a former psychologist at the reservation’s health clinic, prosecutors said in the indictments.

Eastlick, who is not named as a defendant, previously pleaded guilty to bribing Belcourt. Prosecutors said in the new indictments that Eastlick and Houle falsified documents to cover their tracks after learning of the federal investigation.

Houle also is accused of embezzling tens of thousands of dollars from a bank account for the Chippewa Cree Rodeo Association, which prosecutors said had deposits of $2 million between 2009 and 2012 from rodeo events and contributions from tribes and businesses.

Houle and another tribal member disguised the payments to look like legitimate rodeo expenses, prosecutors said. He received cash and to buy a vehicle for his daughter, the indictment said.

Houle also used an intermediary to transfer money from the rodeo account to Belcourt’s wife to pay for a home in Box Elder, prosecutors said.

Houle is charged with fabricating documents to make the transfers appear legitimate once they learned of the federal investigation.

Sunchild was charged in a separate indictment with conspiracy to embezzle tribal money, theft and bribery.

Prosecutors said Sunchild and Belcourt authorized $300,000 in payments to a consulting company owned by Havre businessman Shad Huston. In return, Huston bought a sport utility vehicle for about $25,000 in 2011, and the vehicle’s title was transferred to Sunchild’s daughter, prosecutors said.

The next year, Sunchild authorized the payment of $27,200 to another Huston business and received $15,000 in return, prosecutors said.

Belcourt is not named as a defendant in the new indictments.

BOX ELDER, Mont. (AP) – Federal officials temporarily stopped funding a $361 million water pipeline for a Native American reservation in Montana after learning that millions of project dollars were missing and a Chippewa Cree leader in charge of the project steered federal dollars to a company he owns.

The tribe has since replaced the missing money, but federal funding for the pipeline won’t resume until tribal leaders show they have permanently fixed the problems, Bureau of Reclamation regional director Michael J. Ryan said.

“While we commend the tribe for restoring the funds soon after the shortage and for self-reporting the issue, this reallocation of funds without consultation is a serious non-compliance matter with potentially long-lasting implications,” Ryan said in a March 18 letter obtained by The Associated Press.

Pipeline funding is controlled by the Bureau of Reclamation, which is part of the Interior Department. Bureau spokesman Tyler Johnson confirmed that the agency’s inspector general is conducting an investigation, but Johnson declined to provide details.

The irregularities are among several alleged corruption issues on the Rocky Boy’s reservation in northern Montana, said Kenneth Blatt St. Marks, a former tribal chairman. Marks said he reported the missing pipeline funds to the Bureau of Reclamation and that he is cooperating with the inspector general and with federal prosecutors in an investigation into alleged corruption on the reservation.

Calls to tribal officials were referred to attorney Dan Belcourt, who said he was not authorized by acting tribal chairman Richard Morsette to comment on the pipeline project or St. Marks’ allegations. Belcourt released a brief statement Saturday on behalf of tribal leaders that said they are “actively working with BOR on the issues raised in that letter.”

“The tribe and BOR share a common goal of seeing the Rocky Boy’s/North Central Montana Regional Water System project through to completion,” the statement said.

Congress approved the project in 2002 to bring reliable drinking water to the poverty-stricken reservation in the shadow of Montana’s Bear Paw mountains. Construction began in 2006, and when it is completed, the pipeline will run about 50 miles from Lake Elwell, serving as many as 30,000 people on and off the reservation.

Congress originally estimated the project’s cost at $228 million. That has since risen to $361 million due to inflation and rising costs.

It was unclear what effect a funding delay would have on constructing the pipeline, which is now 22 percent complete. As of last year, the bureau had allocated $96 million in addition to $10 million allocated by Congress.

St. Marks said that, as then-tribal chairman, he discovered at a Dec. 31 meeting with tribal leaders that $3.5 million was missing from Chippewa Cree bank accounts for the water project. Johnson declined to confirm the amount missing, saying it was part of the investigation.

No one could explain where the money went, St. Marks said. The meeting was held at the Chippewa Cree Construction Corp., the company that heads the project.

St. Marks reported the missing funds to the Bureau of Reclamation. In January, the Chippewa Cree Business Committee – the tribe’s governing council – replaced the money with cash from other tribal enterprises, he said.

It still is not clear what happened to the missing money.

Tony Belcourt is CEO of the construction company and head of the pipeline project. Belcourt also co-owns MT Waterworks, a company formed in 2010 that was awarded a $633,000 contract by the tribal construction corporation he heads to supply pipe for the project.

St. Marks said he fired Belcourt as the construction corporation’s CEO after the Bureau of Reclamation learned of that conflict of interest. But the eight other members of the ruling Chippewa Cree Business Committee reinstated Belcourt while St. Marks was on a trip to Washington, D.C.

That reinstatement, and St. Marks’ ownership in another company that was awarded a separate $1.9 million contract for the pipeline, prompted Ryan in his letter to tell the tribe to correct the ethics violations.

“We request that the tribe take immediate corrective action to remedy these apparent conflicts of interest,” Ryan wrote. He did not elaborate on what action the tribe had to take.

Belcourt, a former state legislator, declined to comment Friday and referred questions to his cousin, tribal attorney Dan Belcourt, who said he was not authorized to comment.

St. Marks was the owner of Arrow Enterprises, a private construction company that was awarded the $1.9 million contract before he became the tribe’s chairman. St. Marks said he turned over the company to his wife to end any conflict of interest.

But Johnson, of the Bureau of Reclamation, said the federal agency has not accepted that arrangement and the agency is requesting action to resolve the conflict.

In his letter, Ryan said the Chippewa Cree’s accounting of project funds was not accurate and lacked supporting data such as bank statements, balance sheets and expense statements. Johnson said Friday that the tribe has submitted additional financial information and corrected its accounting.

Still, Ryan gave the tribe until April 29 to resolve the rest of the problems and avoid more funding delays.

St. Marks became tribal chairman in November but was impeached in March by the business committee, which leveled seven charges against him ranging from inappropriate sexual comments to an employee to trading in two tribal vehicles so he could buy a sport-utility vehicle for personal use.

St. Marks denied the charges. He claimed he was impeached for cooperating with the federal investigation and for asking questions about the finances of some of the tribe’s biggest enterprises: its casino, health clinic and an online lender.