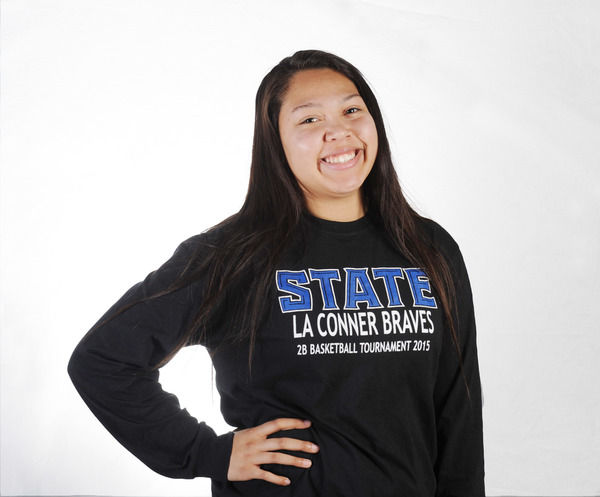 On Wednesday, April 1, 2015 the Associated Press announced their All-State basketball teams for boys and girls high school players, as voted on by sports writers and editors from around the state. La Conner High School junior and Tulalip tribal member, Adiya Jones, was named to the First Team for all Class 2B girls’ high school players in the state.

Prior to this past year Adiya was the face of the Heritage High School girls’ basketball team. She was part of a successful season in her freshman year, followed by being the focal point of the team’s offense in her sophomore year as she led the team in scoring and rebounding. It was expected she would again be the team’s star player in her junior season, but in a twist she opted to transfer out of Heritage and play at La Conner High School. Adiya and her mother, Charlotte Jones, relocated to the small town of La Conner in order for her to attend the local high school.

Over the next several months Adiya would become part of a new community and lead a new group of teammates on the basketball court. In fact, Adiya excelled at La Conner, both on and off the court, resulting in her being named co-MVP of the Northwest 2B Basketball League and leading her team to a 3rd place finish in the 2B State Tournament. Adiya sat down for an interview with the See-Yaht-Sub to tell her story to her tribal membership.

When did you first start playing basketball?

“I honestly didn’t like basketball when I was younger. I was a long-time cheerleader and loved to dance. Then before 7th grade I hit a growth spurt and being taller now I decided to try out for the basketball team. It didn’t work out. I was cut from the team, but decided at that moment I was going to come back and try out again next year. I worked out that summer and trained with Tori Torrolova, the Tulalip Boys and Girls Club athletic director. She really worked with me on improving my game and teaching me the fundamentals.”

So you’ve only been playing organized basketball for a little over four years then?

“Yeah, looking back I’m still surprised that I’ve accomplished what I have, being that I haven’t played basketball nearly as long as other girls I know. It came to me naturally after working out with Tori and getting help from my coaches along the way.”

Why did you transfer out of Heritage H.S. and why did you choose La Conner H.S. to transfer to?

“I’ve always wanted to go to a much better school academically. I miss Heritage, but I feel like moving up here was huge for me because I have many more opportunities available to me now. Originally, before making the decision, I met with [La Conner basketball coach] Coach Novak to talk about how I’d fit in and what our goals would be. After meeting with him I knew La Conner is where I wanted to go.”

Was it difficult adjusting to a more traditional curriculum?

“The quality of education is a big difference maker. The curriculum at La Conner is completely different. At first it was really hard to adjust. The first week I didn’t think I was going to make it. There’s homework every night. Here, they are prepping us for college. It’s a really good school. I’ve learned so much during this school year. I’m really happy I made the change because I’m learning every day.”

At La Conner you mentioned they have curriculum that really challenges you and helps you to succeed. How so?

“They have TAs and parents that come in to help students get homework done or particularly tough assignments. For me, at one point I had a tutor come in and help me for like four weeks with homework and writing papers. When I first came to La Conner I didn’t even know how to type up a full paper and edit because we didn’t do that at Heritage. At La Conner they have people who are there to help you and to support you to make sure you are understanding and able to do the work. The first week I felt like this wouldn’t be the place for me because I wasn’t used to this kind of environment and the curriculum was completely different. I kind of felt dumb at first, but after a few weeks I become more comfortable because I was getting the help that I needed. The faculty and tutors helped me to adjust. They wanted me to succeed and that made all the difference.”

Do you feel you’re getting better prepared for college life?

“Yeah, because they really hold you accountable for your homework and deadlines for assignments. They want you to succeed and recognize when you need one-on-one attention to understand the curriculum.” 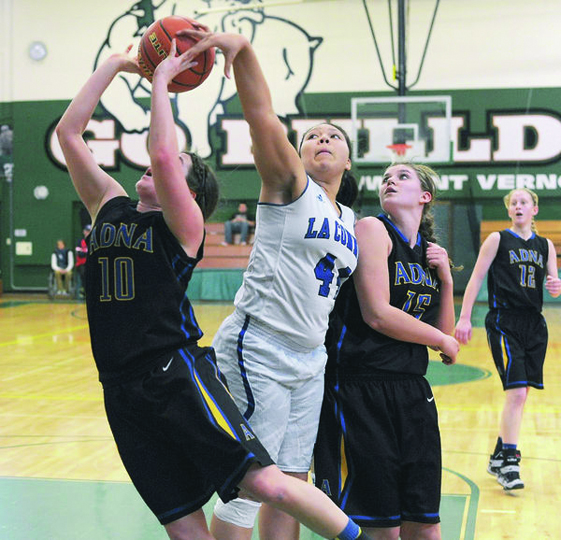 How does the style of play differ from what you were used to at Heritage?

“There’s a big difference. Coach Novak is really about structure and bases our game off of defense and set plays. The first week all we did was conditioning, other than that, the rest of our practices were focusing on our sets. At Heritage it was basically a few plays and half the time we didn’t run them. It was a huge change because back at Heritage it was mainly like, ‘get the ball to Adiya.’ Most of the plays were based off me, whereas here at La Conner it feels really good to have support and not be relied on to carry the offense all the time.”

How is the competition different playing in a larger league?

“Our league isn’t the best, but it’s an improvement competition-wise. We get more good competitive games, and for me I get to match up with girls who are my size or bigger with skill. At Heritage, district 1B, there weren’t that many girls bigger than me or taller than me so I wasn’t challenged in the ways that I am playing for La Conner. Being challenged makes me play better and improve my game.”

What was the adjustment period like playing with a brand new team?

“It helped a lot that Coach Novak had us all play fall league together before our high school regular season started. At first it was kind of hard to adjust, but we learned each other’s games pretty quick. Our point guard, Kamea Pino, was also a transfer student and new to the school like me. It helped me and her bond, both being the new players on the team. It really showed how we came together in a short amount of time by starting the season like we did.”

Before your first basketball game for La Conner, did you have any doubts about your skills in a different league?

“Yeah, I had doubts. I didn’t even know if I was going to be a starter. Coach Novak was really good about working with me to calm my nerves in the very beginning. “

But then you went on to be a starter and had a great season. You even averaged 16.3 points per game. Did that validate your skills as a basketball player?

“Oh yeah, fitting in as quickly as I did and taking on a good portion of our offensive sets really let me know that I could find a way to play in any league. Being able to score on better competition and then winning the Skagit Valley Herald Girls’ basketball player of the year was one of the best feelings.”

You guys got off to a really good start and in fact went undefeated during the regular season. At what point did you realize you had a real shot at winning the state title?

“I think it was towards the end of the regular season when we knew we’d be league champs. There was a week where we won our league and then came together, as a team to overcome some challenges at the district tournament. Really coming down to it, it was at that time that as a team we recognized we could win state.”

Going into the semi-finals at State your team was 24-0 and had a 10 point lead in the 4th quarter, but ending up losing the game. What happened?

“The easy answer is I fouled out with a few minutes to go. If I don’t foul out then I 100% believe we would have won that game. It was late in the game and I was exhausted from all the ball we’d been playing and I picked up some errant fouls that ended up being the difference. It was a really tough loss.”

But then your team bounced back in the 3rd place game, right? That’s still a nice accomplishment in your first year with La Conner to go 25-1 and place 3rd in the state tournament.

“Yeah, we were shocked after losing our first game of the season, but we came together and wanted to still finish the season strong. I was so mad at myself for fouling out in the semi-finals and was determined to end the season with a good game. In the end, whether we took 3rd place or not we were all happy as a team to be one of the top teams in the entire state.”

Now you have that extra motivation to come back even better next season and to hopefully win it all at state.

“Definitely. We have three returning starters and will be even hungrier to win the state championship. For me, it was my first experience playing on that level and now I know what it takes to take that next step. I’m all about basketball right now and focused to win a state championship. I’m not even playing a spring sport right now so that I can play spring league basketball. Plus, it’ll be my senior year, my last season of high school ball, so that’s even more added motivation for me to get better for myself and my teammates.”

Outside of school and basketball, how are you liking living in La Conner?

“It’s a very uplifting atmosphere and easy to get adjusted to. Over here there is definitely less drugs, so it’s good to be away from that type of environment. It’s so friendly here, like everyone is friendly and it’s very peaceful. I could walk to the store and people who I don’t even know recognize me as a basketball player and say ‘Congrats’ or ‘good job!’ and it feels really good to have people I don’t know acknowledge me like that.”

Who are your favorite basketball players to watch?

I hear you plan on playing some ball in Europe during the summer. What’s that about?

“It’s such an exciting opportunity. I’ve been invited by the ACIS program to play basketball in Italy from July 15-21. I’ll be able to learn about the game on a whole new level and learn about that culture. I’m kind of scared to be in a new country, but I’m more excited for the opportunity to showcase my skills. It’s going to be a lot of fun.”

What areas of your game are you going to focus on improving before the start of your senior season?

“Really working on better post moves is my main goal. I’ll be working on my conditioning too so that I’ll be in the best shape possible to be quicker on the court. Now, I know what it takes to the next level, to the championship game and I want to become a great player so that I’m prepared to take that next step.”

You averaged 16.3 points per game this past season as a junior. What is your goal to average in your senior season?

“My goal is to average at least 20 points per game. I think I can do it and being my senior year that would be a good goal to accomplish, along with winning a state title.”