Much has been made of the need to develop climate-change-adaptation plans, especially in light of increasingly alarming findings about how swiftly the environment that sustains life as we know it is deteriorating, and how the changes compound one another to quicken the pace overall. Studies, and numerous climate models, and the re-analysis of said studies and climate models, all point to humankind as the main driver of these changes. In all these dire pronouncements and warnings there is one bright spot: It may not be too late to turn the tide and pull Mother Earth back from the brink.

None of this is new to the Indigenous Peoples of Turtle Island. Besides already understanding much about environmental issues via millennia of historical perspective, Natives are at the forefront of these changes and have been forced to adapt. Combining their preexisting knowledge with their still-keen ability to read environmental signs, these tribes are way ahead of the curve, with climate-change plans either in the making or already in effect.

Swinomish Tribe: From Proclamation to Action

On the southeastern peninsula of Fidalgo Island in Washington State, the Swinomish were the first tribal nation to pass a Climate Change proclamation, which they did in 2007. Since then they have implemented a concrete action plan.

The catalyst came in 2006, when a strong storm surge pushed tides several feet above normal, flooding and damaging reservation property. Heightening awareness of climate change in general, it became the tribe’s impetus for determining appropriate responses. The tribe began a two-year project in 2008, issued an impact report in 2009 and an action plan in 2010, said project coordinator and senior planner Ed Knight. The plan identified a number of proposed “next step” implementation projects, several of them now under way: coastal protection measures, code changes, community health assessment and wildfire protection, among others.

The tribe won funding through the U.S. Department of Health & Human Services and the Administration for Native Americans to support the $400,000 Swinomish Climate Change Initiative, of which the tribe funded 20 percent. When work began in 2008, most estimates for sea level rise by the end of the century were in the range of one to one-and-a-half feet, with temperature changes ranging from three to five degrees Fahrenheit, said Knight. But those estimates did not take into account major melting in the Arctic, Antarctica and Greenland, he said.

“Now, the latest reports reflect accelerated rates” of sea level rise and temperature increases, Knight said. Those are three to four feet or more, and six to nine degrees Fahrenheit, respectively, by 2100. “We are currently passing 400 ppm of CO2, on track for Intergovernmental Panel on Climate Change worst-case scenarios.”

Since the Swinomish started work on climate issues, many tribes across the country have become active on these issues as they also realize the potential impacts to their communities and resources. The Institute for Tribal Environmental Professionals (ITEP) has been funded over the last few years to conduct climate adaptation training, Knight said, “and probably more than 100 tribes have now received training on this.”

Jamestown S’Klallam tribal citizens live in an ecosystem that has sustained them for thousands of years, on the Olympic Peninsula of Washington State. Over the past two centuries they have successfully navigated societal changes, all while maintaining a connection to the resource-rich ecosystem of the region. Though they have also adapted to past climate variations, the magnitude and rapid rate of current and projected climate change prompted them to step it up. That became apparent when tribal members noticed ocean acidification in the failure of oyster and shellfish larvae. 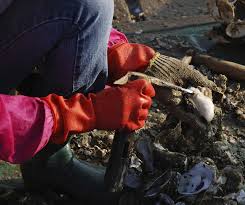 “Everyone who was part of the advisory group all had their personal testimony as to the changes they’d seen,” said Hansi Hals, the tribe’s environmental planning program manager, describing a meeting of a sideline group. “Everybody had something to say.”

Tribal members brought their concerns to the attention of the Natural Resources committee and tribal council three years ago, Hals said. This past summer they released their climate vulnerability assessment and adaptation plan, which identified key tribal resources, outlined the expected impacts from climate change and created adaptation strategies for each resource. It included sea-level-rise maps are for three time frames, near (low), mid-century (medium) and end of century (high).

Tribal lands of the Mescalero Apache in southwestern New Mexico flank the Sacramento Mountains and border Lincoln National Forest, where increased frequency and intensity of wildfires is due to drought-compromised woodlands. Mike Montoya, director of the Mescalero Apache Tribe’s Fisheries Department, executive director of the Southwest Tribal Fisheries Commission and project leader for the Sovereign Nations Service Corps, a Mescalero-based AmeriCorps program, has observed climate-driven changes to the landscape in his years in natural resource management. 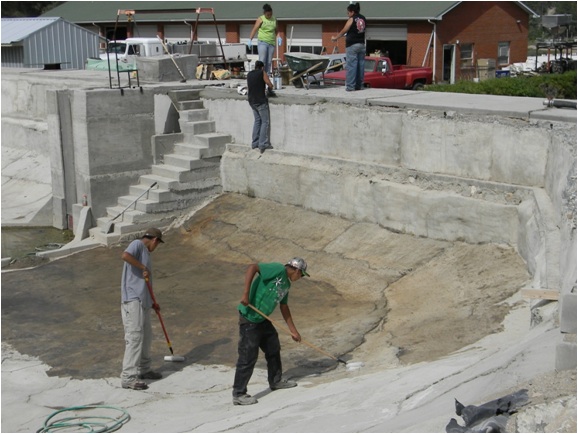 The tribe has undertaken innovative environmental initiatives to help bolster tribal resilience to climate change impacts, Montoya said. One example is a pond constructed for alternative water supply to the fish hatchery in the event of a catastrophic flood event. It holds 500,000 gallons of water from a river 3,600 feet away.

“It’s all gravity fed,” Montoya said. “Now, with the aid of solar powered water pumps, we are able to supply water to our community garden.”

With lands within and around the Klamath River and Six Rivers National Forests in northern California, the Klamath Tribe is implementing parts of its Eco-Cultural Resources Management Draft Plan released in 2010. The plan synthesizes the best available science, locally relevant observations and Traditional Ecological Knowledge to help the Karuk create an integrated approach to addressing natural resource management and confront the potential impacts of climate change. 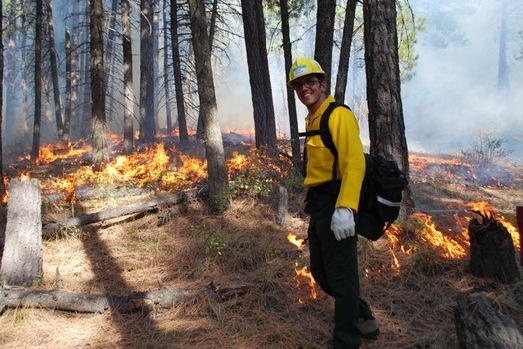 These tribes, who live in what is today known as Montana, issued a climate change proclamation in November 2012 and adopted a Climate Change Strategic Plan in 2013. The Tribal Science Council identified climate change and traditional ecological knowledge as the top two priorities for tribes across the nation in June 2011, according to Michael Durglo, the tribe’s division of environmental protection manager and climate change planning coordinator, as well as the National Tribal Science Council’s Region 8 representative.

So did the Inter-Tribal Timber Council, which his brother, Jim Durglo, is involved with. In fall 2012 the confederated tribes received financial support through groups affiliated with the Kresge foundation and from the Great Northern Landscape Conservation Cooperative to develop plans, Michael Durglo said. A year later, in September 2013, the tribes’ Climate Change Strategic Plan was completed and approved by the Tribal Council. Next the tribes will establish a Climate Change Oversight Committee.

“This committee will monitor progress, coordinate funding requests, continue research of [Traditional Ecological Knowledge], incorporate the strategic planning results into other guiding documents such as the Flathead Reservation Comprehensive Resource Management Plan and others, and update the plan on a regular basis based on updated science,” said Michael Durglo.

More than a decade ago the Nez Perce Tribe, of the Columbia River Plateau in northern Idaho, recognized carbon sequestration on forested lands as a means of preserving natural resources and generating jobs and income, while reducing the amount of greenhouse gases emitted into the atmosphere. [With the over arching goal of restoration,] in the mid to late 1990s the Nez Perce Forestry & Fire Management Division developed a carbon offset strategy to market carbon sequestration credits. The purpose of the afforestation project, about 400 acres in size, was to establish marketable carbon offsets, develop an understanding of potential carbon markets and cover the costs of project implementation and administration.

Nez Perce project before and after. (Photo: NAU ITEP)

As carbon markets soften and actual project development slows, the tribe cites the increased awareness and education of other tribes of the carbon sales process and opportunities for more carbon sequestration projects in Indian country as its biggest accomplishment of the last two years.

This tribe in southern California has taken numerous steps to reduce greenhouse gas emissions and address the impacts of climate change on tribal peoples, land and resources. In 1998 the tribe formed the Santa Ynez Chumash Environmental Office.

SYCEO’s projects are numerous and have had impressive results, including major reductions of greenhouse gas emissions. An example is the Chumash Casino’s implementation of a shuttle bus program that eliminated 800,000 car trips in 2009, replacing them with 66,000 bus trips. The casino is reducing its energy consumption, chemical waste and use of one-use materials. It also has an extensive rainwater and gray water collection and treatment system. Many of these initiatives have economic benefits and provide a model and economic incentive for tribal and non-tribal businesses to implement similar changes.

This Native village on the western coast of Alaska is home to some of the U.S.’s first climate refugees. They leapfrogged over mere adaptation-mitigation as sea and river cut through and then eroded the permafrost beneath their village and a 1983 assessment found that the community would be endangered within 25 to 30 years. In 1994 Newtok began work on what then seemed the ultimate adaptation plan: relocation. 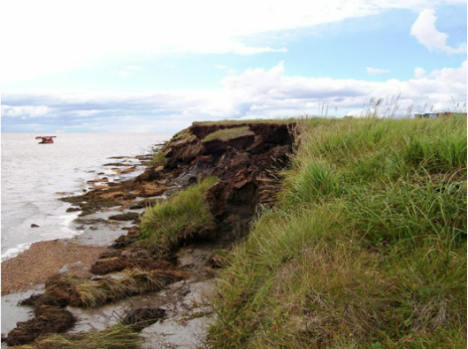 The Native Alaskan village of Newtok had to relocate as its shoreline was washed away because of melting permafrost. (Photo: Newtok Planning Group)

They selected Mertarvik nine miles to the south as the relocation site in 1996. Their efforts intensified when a study by the Army Corps of Engineers found that the highest point in the village would be below sea level by 2017. The Newtok community, government agencies and nongovernmental organizations formed the Newtok Planning Group in 2006, but as Newtok’s administrator Stanley Tom searched for funding he struck little pay dirt. Mostly, he hit walls. Now Tom is calling for evacuation, exposing it as the true ultimate in adaptation.

“It’s really happening right now,” He told the Guardian last May. “The village is sinking and flooding and eroding.”

Tom told the British newspaper that he was moving his own belongings to the new, still very sparse village site over the summer–and advised fellow villagers to start doing the same.