By Jewell James, courtesy to the Bellingham Herald August 11, 2014

For generations, tribal peoples have witnessed the impact of faceless “persons” — corporations — on the land, water, air and human and environmental health. Though at times consulted, we have not been heard as a real voice in defending our traditional homeland territories. Instead, we have seen and experienced degradation of environmental integrity and destruction of healthy ecosystems. We suffered as our traditional foods and medicines were lost, and our people’s health plunged.

The Lummi, the Affiliated Tribes of Northwest Indians, and all Coast Salish tribes, face devastating proposals that would bring coal by rail from Montana and Wyoming to the West Coast for export overseas. Indeed, the Cherry Point (in our language, Xwe’chi’eXen) proposal poses a tremendous ecological, cultural and socio-economic threat to Pacific Northwest tribes.

Xwe’chi’eXen is a 3,500-year-old village site where many of our ancestors lived and made their final resting places. Today, 60 percent of Lummis have direct ancestral ties to this site. Around it, the Salish Sea supports a Lummi fishing fleet (450 vessels) that feeds and supports tribal families.

Coal exports threaten all of this. We fear the desecration of Xwe’chi’eXen, the first archaeological site to be placed on the Washington State Register of Historic Places. We wonder how Salish Sea fisheries, already impacted by decades of pollution and global warming, will respond to the toxic runoff from the water used for coal piles stored on site. How will Bellingham’s recreational and commercial boaters navigate when more than 400 cape-sized ships, each 1,000 feet long, depart Cherry Point annually — each bearing 287,000 tons of coal? What will happen to the region’s air quality as coal trains bring dust and increase diesel pollution? And of course, any coal burned overseas will come home to our state as mercury pollution in our fish, adding to the perils of climate change.

Already, coal export officials have shown breathtaking disrespect for our heritage. To save time and boost profits, Pacific International Terminals bulldozed what they knew to be a registered archaeological site and drained our wetlands without a permit.

This proposal is not based on economic necessity. The inflated number of jobs promised is an old, old story; one filled with promises made, and broken. At the end of the day there would be far fewer jobs created and many sustainable jobs lost or compromised. The defeat of this madness is our aboriginal duty as the first Americans, but it also speaks to the collective interest of all citizens and — most importantly — as members of the human family who are part of, not masters over, creation. But this is a new day.

To those who would sacrifice the way of life of all peoples of the Pacific Northwest, we say: Take notice. Enough is enough! This summer’s proposed changes to the site design are beside the point. Mitigation is not the issue. We will stop the development of the export terminal and put in its place a plan that honors our shared responsibility to the land and waters of Xwe’chi’eXen and all our relations.

In August we make our journey from South Dakota to the Salish Sea and north to Alberta, Canada, stopping with many of the tribal and local communities whose lives unwillingly intersect with the paths of coal exports and tar sands. We will carry with us a 19-foot-tall totem that brings to mind our shared responsibility for the lands, the waters and the peoples who face environmental and cultural devastation from fossil fuel megaprojects. We travel in honor of late elder, and leader, and guiding light Billy Frank, Jr., who would remind us that we are stewards placed here to live with respect for our shared, sacred obligation to the creation, the plants and animals, the peoples and all our relations. He guides us, still. Our commitment to place, to each other, unites us as one people, one voice to call out to others who understand that our shared responsibility is to leave a better, more bountiful world for those who follow.

We welcome you to the blessing of the journey at 9:30 a.m., Sunday, Aug. 17 at the Lummi Tribal Administration Center, 2665 Kwina Road. 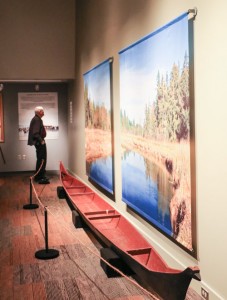 TULALIP –  The first Thursday of each month the Hibulb Cultural Center & Natural History Preserve features free admission to their exhibits, guest lectures and workshop series and a chance to purchase new arrivals at the center’s gift shop.

Guests today will enjoy free admission to the center’s new exhibit, A Journey with our Ancestors: Coast Salish Canoes, in addition to its main exhibit where you will learn about the history of the Tulalip Tribes, and  Warriors We Remember, a gallery that tells the story of the Tulalip Tribes military tradition. This exhibit honors the Tulalip men and women who served their country in time of conflict and peace.

A Journey with our Ancestors: Coast Salish Canoes features a linear format which tells the historical timeline of canoe use and importance starting with pre-contact. Visitors will not only learn how canoes are used by Coast Salish tribes to travel, but also the different canoe styles, anatomy and how they are constructed, along with traditional canoe teachings and stories and about canoe carvers, canoe races and canoe journeys.

There is no scheduled workshop or guest lecture today. 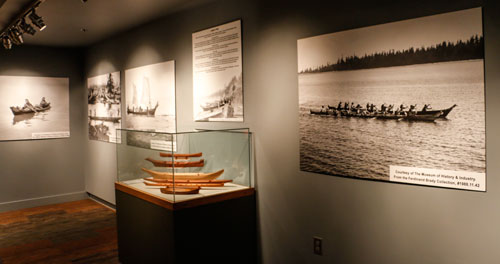 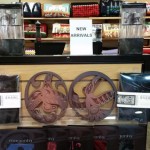 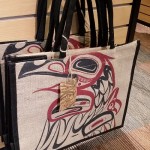 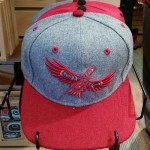 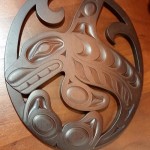 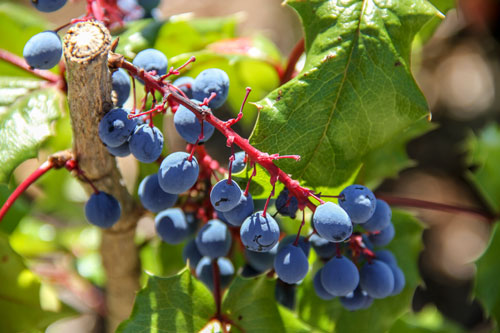 Indigenious to the Pacific Northwest, Oregon-Grape resembles the Holly with its green leaves and produces deep bluish purple berries that have a tart taste when consumed, and are part of the traditional diet of tribes located in the Pacific Northwest.
Photo/ Brandi N. Montreuil

Spotlight on the Oregon-Grape

You might have noticed the blooming of flowers, foliage, and other plant species occurring as our summer season kicks into high gear. The abundance of sunshine has increased outdoor activities where these blooming specimens have been the main attraction for people out for a stroll.

As you grab your walking shoes to enjoy some of that summer sun, keep your eyes peeled for a flowering plant native to western North America called the Oregon-Grape, or M. aquifolium for you plant enthusiasts.

The Oregon-Grape is a cousin to the Goldenseal plant and known to be bitter due to a presence of alkaloids including berberine. There are many types of Oregon-Grape, but the tall variety can grow up to 8 feet tall, while the dwarf variety will only grow a few feet in height. Other types include cascade, low, and creeping Oregon-Grape.

All varieties feature stiff branches with leaves that will remind you of Holly with their glossy prickly leaves, which are deep green on top and silvery underneath. Flowers are yellow and bloom in late spring, followed by the presence of small bluish-black berries sprouting in clusters from its branches resembling true grapes, from which it takes its namesake. Berries, ripe from July until September, and have a tart taste with earthy undertones.

As a Northwest perennial, Oregon-Grape is prized for its beauty and heartiness which has made it an excellent choice for city landscapers.

The plant also has a variety of medicinal uses thanks to that bitterness, which has been used by Coast Salish tribes to help stimulate liver function, aid digestion, and used as a laxative.

Oregon-Grape is a great addition to gardens with its vibrant foliage, flowers and berries which will create a colorful splash in shady or woodland plantings. Its ability to survive summer droughts and its tolerance for poor soils make it an easy plant for gardeners to enjoy.

For more information on Oregon-Grape check out www.thegardenhelper.com/oregon_grape for growing tips or www.wildfoodsandmedicines.com for medicinal and harvesting tips. 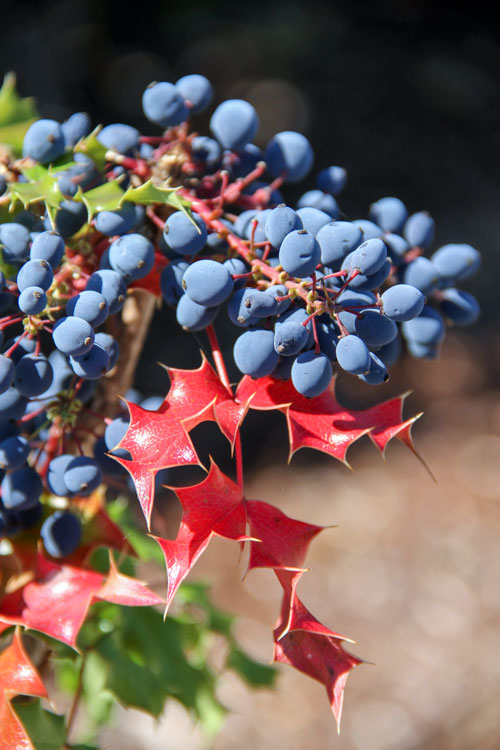 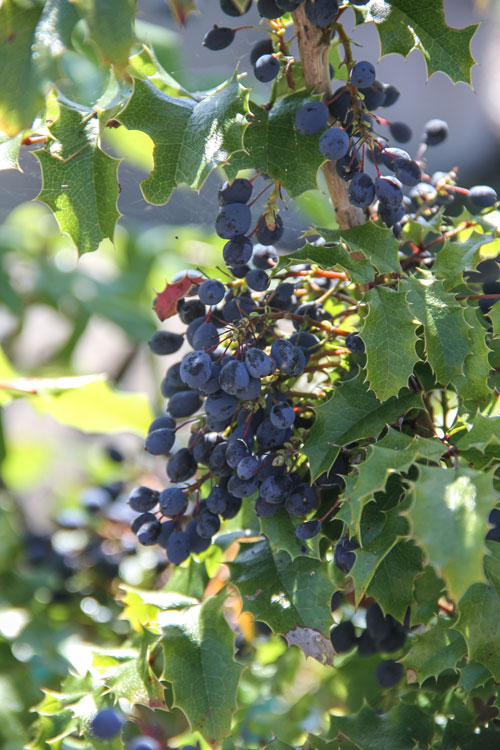 Oregon Grape planted near the Tulalip Administration Building is used as a natural filter to clean water runoff before it reaches the Tulalip Bay, and should not be harvested for traditional use.
Photo/ Brandi N. Montreuil, Tulalip News