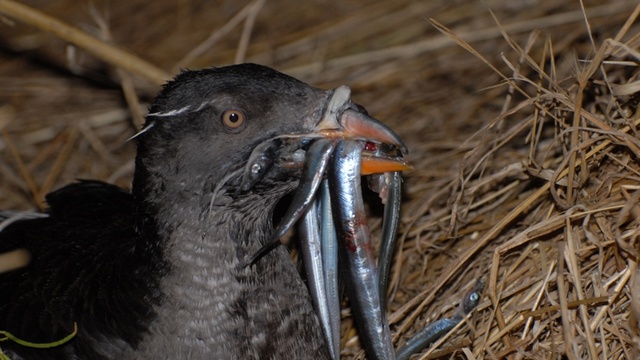 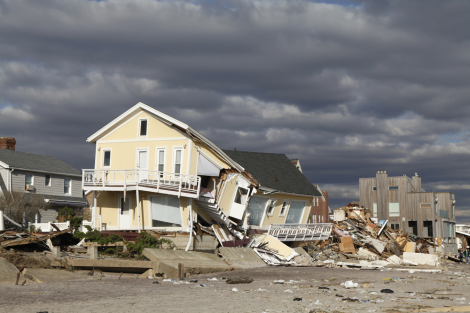 ShutterstockBeach house in the aftermath of Hurricane Sandy in Far Rockaway, N.Y.

Kevin Shanley says too many cities have an outdated approach to storm protection that makes them vulnerable to the coming mega-storms. The CEO of SWA Group, an international landscape architecture, planning, and urban design firm, Shanley is an advocate of using “green infrastructure” — human-made systems that mimic natural ones — as bulwarks.

In the wake of Hurricane Sandy, people are taking note. Some experts believe New York City would not have sustained such severe damage had the original wetlands that lined the coasts not been uprooted by development. In fact, some parts of Staten Island remained relatively unscathed because they were protected by the massive Fresh Kills Park and its wetlands.

What’s needed, Shanley says, are policy shifts “rooted in a natural system-approach that work with nature’s tremendous forces.” Beyond policy changes though, Shanley has also worked on projects, in Texas and elsewhere, that show how these human-made systems could work. But he cautions that more research is needed if communities’ lives and livelihoods are to rely on human-made nature.

Shanley was recently in Washington, D.C., speaking at the Renewable Natural Resources Foundation on improving the resiliency of our coasts in an effort to protect them from increasingly damaging storms and sea-level rise brought on by climate change. I caught up with him there.

Q. What were the lessons of Hurricane Sandy?

A. There are real-world lessons and then “should-be” lessons. The real-world lesson is that everybody is at risk. These storms don’t just happen to Florida or Bangladesh. They can hit New York City. The storm could have hit Washington, D.C., with disastrous results. We’re not ready.

The other lesson we need to learn is quite important: We forget really quickly. Katrina happened, now eight years ago. Some structural changes were made to the levee system, but all of the really great plans to rebuild New Orleans as a more sustainable community, a better community, a more integrated community came to nothing.

The key is finding a way to rebuild strategically and learn lessons from these disasters to shape our future plans.

Q. New York City’s new climate adaptation plans calls for both “hard” infrastructure, like seawalls, and “soft,” green infrastructure. In a recent Metropolis magazine piece, Susannah Drake described soft infrastructure as “transforming the waterfront from a definitive boundary into a subtly graded band.” How well will this work?

A. Soft green infrastructure along coastal fringe areas can play a really important role in restoring ecological functions to our coastlines. Our coastlines have been severely degraded from an ecological point of view. But using these systems to protect urban areas needs really serious science and engineering studies. Just how effective is a coastal marsh of several hundred yards wide? We’re not talking about miles wide. We’re talking probably several hundred yards or hundreds of feet. What is the benefit to, say, Manhattan? Can we take a blended approach to soften our edges and create redundant and resilient strategies?

I’ve seen some beautiful renderings of the edge of Manhattan as it could be. There would be dramatic changes in ecological performance and a transformation in public perception about the city as a green place. There are a lot of wonderful aspects to this. But from a surge and hurricane risk-protection standpoint, we need to be careful not to set up false expectations. To what extent do coastal marshes protect us when a surge comes in that is 15 or 20 feet above those marshes? The green infrastructure could impede the wave action and the movement of the water, or even exacerbate the run-up of a surge in shallow waters. The Gulf Coast of the North American continent has a long, shallow coastal run-up, which tends to exacerbate wind-driven surge.

Also, rising water levels drown coastal marshes. That’s what has happened in the Galveston Bay complex in Texas. Because of subsidence caused by groundwater withdrawal, we lost square miles of emergent coastal marsh. The bottom dropped out and it drowned the marshes. One can say, “Well, the marsh will just march inland.” Well, will it? Does the actual geography allow it to just march inward? These are important questions.

Q. New York Gov. Andrew Cuomo wants to spend $400 million to buy up homes in New York City, demolish them, and then preserve the flood-prone land as undeveloped coastline. Does this approach make sense?

A. It’s a potentially very powerful tool. Speaking globally, the British and Dutch have been at it for decades. It’s called “managed retreat.” It’s about getting out of harm’s way. FEMA has been funding buyouts like that for a while now. It’s a really good program to remove the most at-risk structures, particularly federally insured structures that time after time are repeat sinks for federal flood insurance claims.

What needs to be thought about, however, if you’re talking about scaling it up, is how to replace the economic value of the development that’s being removed from harm’s way. There are sales taxes based on the occupants, all kinds of revenue to the community. This revenue pays for schools, sewer systems, security, and all of the other things that we take for granted in government. Coastal real estate is expensive because it’s attractive. If you take that out of the equation, you’ve got to be ready to think how to replace that.

That’s the challenge facing all of us. Great ecological strategies need to be considered economically, and vice versa.

Q. Respected scientists argue that sea levels could rise four feet by 2100. How does this change the timeline for action on improving coastal resiliency?

A. Sea-level rise is like watching the hour hand move. We are like grammar school students: The hour hand doesn’t seem to move during class. Our time horizons are measured in just a few years at best. If we’re forward-thinking, we might think out 10 years. Will public policymakers be able to think out beyond a year or even 10 years to 100-year thresholds? The dialogue is there, but I don’t see it coming down to meet real public policy changes yet.

Q. What’s holding back these policy shifts? Where are the biggest obstacles at the federal and local levels?

A. The biggest obstacle is the lack of public awareness … there needs to be clear communication about the risks. That can be through things like flood insurance rate maps, but it also needs to be through public education and policy. There needs to be clear disclosure on every real estate transaction. There was an effort in the Clear Lake City area, which is in the Houston metro region where NASA’s Johnson Space Center is located. They actually put up signs, little colored pylons, that indicated “This is the water level for a category four storm. This is the water level for a category five storm.” You see it there and you would wonder, “Gee, should I buy a house here?” or certainly “Gee, should I make sure I renew my flood insurance?” A local politician, at the behest of the real estate community, insisted they be taken down.

Q. The Buffalo Bayou Promenade in Houston really set the example for how to turn a trash-soaked eyesore into a beautiful piece of parkland that also supports flood control. What led to the changes in Houston’s approach to its waterways and green space?

A. In Houston, the new riverfront has been the result of years of work by lots of individuals, nonprofit organizations, and government agencies. Each main bayou in the city has its own citizen advocacy organizations. Some of them are fairly significant and have permanent staff, whereas others are purely volunteer citizen groups. There have been willing ears in the public agencies. More recently, there has been support at an elected official-level, including a very supportive mayor right now. That’s very encouraging. But we have a long ways to go. We’re just starting on this effort. We have 2,000 miles of open stream channels in Harris County alone, so we’re just beginning.

Q. You’ve done a lot of work in China. What is your impression about how the Chinese are approaching coastal resiliency? Is there a uniquely Chinese approach to these issues that we can learn from in the West?

A. The country is doing great wetlands restoration projects. Wetland parks are all the rage across China. Kongjian Yu, FASLA, principal at Turenscape and professor at Beijing University, probably has a dozen wetland parks on his desk in his office at any given time. We’re working on a number of them. It puts to shame anything we’re doing here. On the other hand, one has to balance that against the unbelievable rate of urbanization and its impact on the environment in China. It’s maybe only a drop in the bucket toward mitigating the impacts of urbanization that are going on right now.

You take the whole climate issue in China. China’s doing some of the most progressive carbon-capture energy production in the world. For a while, they were the largest producer of solar cells. They’re the largest producer of wind generating equipment. There are all these sort of extremes of what they are doing. Yet in the global sense, they’re producing more carbon dioxide than anybody on a more rapid basis. They’re increasing their carbon and energy footprints. They’re still below us on a per-capita basis, but they’re working very hard to catch up to our own huge footprints. So you will find a really mixed bag in China.

What can we learn from China? We ought to be studying what they are doing right and trying to learn from their successes. To the extent they’re interested in partnering so they can learn from us, we ought to be sharing those solutions with them. It’s a wild ride, like a rollercoaster, and one whose end we can’t see from our vantage point.