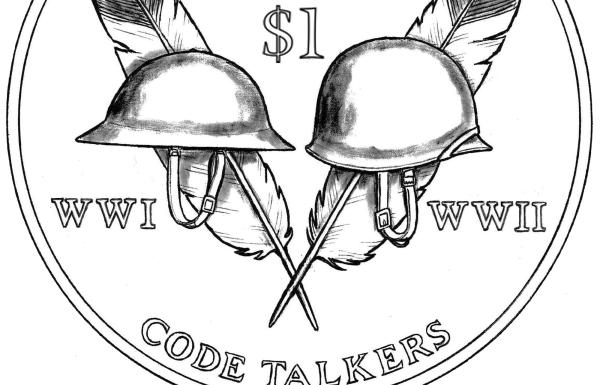 The U.S. Mint has announced its designs for the 2015 and 2016 Native American $1 coins, and the choice of subjects—Mohawk Iron Workers and Code Talkers—represent a focus on  late 19th- and 20th-century Native history. Since 2009, beginning with a depiction of the “three sisters” agricultural technique, which Natives practiced for thousands of years before European contact, reverse-side coin designs have spotlighted elements of Native culture or episodes from history in a sort of timeline. The 2014 coin commemorated the Native role played in Lewis and Clark’s 1804-06 journey into the Pacific Northwest.

Under the terms of the Native American Coin Act signed by President George W. Bush in 2007, the 2016 coin will be the program’s last.

RELATED: 7 Choices for the Back of the Next Dollar Coin: What’s Your Favorite?

Below is the full press release, dated September 3, from the U.S. Mint:

WASHINGTON – The United States Mint announced today the reverse (tails side) designs selected for the 2015 and 2016 Native American copy Coins.

The theme for the 2015 design is “Mohawk high iron workers, builders of New York City and other skylines (from 1886).”  The design depicts a Mohawk ironworker reaching for an I-beam that is swinging into position, rivets on the left and right side of the border, and a high elevation view of the city skyline in the background.  The design includes the required inscriptions United States of America and copy, and the additional inscription Mohawk Ironworkers.  United States Mint Artistic Infusion Program (AIP) artist Ronald D. Sanders designed the reverse, and United States Mint Sculptor-Engraver Phebe Hemphill will sculpt it.

The theme for the 2016 design is “Code Talkers from both World War I and World War II (1917-1945).”  The design features two helmets with the inscriptions WWI and WWII, and two feathers that form a “V,” symbolizing victory, unity, and the important role that these code talkers played.  The design also includes the required inscriptions United States of America and copy.  Artist Thomas D. Rogers, Sr. designed the reverse.  The sculptor-engraver will be selected at a later date.

The obverses (heads sides) of the 2015 and 2016 Native American copy Coins will continue to feature sculptor Glenna Goodacre’s “Sacagawea” design, introduced in 2000.  Inscriptions will be LIBERTY and IN GOD WE TRUST.  The year, mint mark, and E PLURIBUS UNUM will be incused on the coins’ edges. 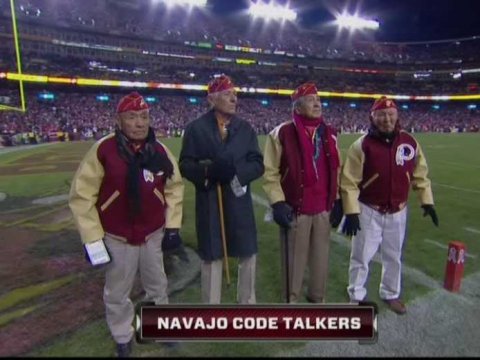 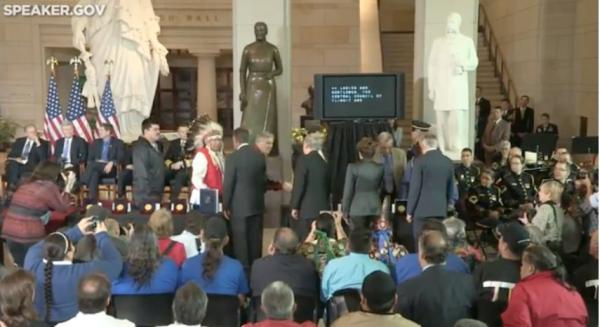 Code Talkers from 33 tribes other than the Navajo Nation receive their Congressional Gold Medals.

This morning at 11 a.m., Native American Code Talkers from 33 tribes were honored at the nations Capitol in Washington D.C. Taking the limelight with such notable historical figures as Rosa Parks, Mother Teresa and Astronauts, the Native Code Talkers and their prospective tribes were awarded Congressional Gold Medals.

Also in attendance were family members and tribal leaders representing the Native Code Talkers as well as 96-year-old Edmond Harjo.

Speaker John Boehner opened the ceremony by applauding the efforts of Harjo who had recognized a fellow soldier’s language in 1944 and was later utilized by the U.S. military as a code talker.

“Edmond and his brothers were at Normandy and Iwo Jima and they mobilized the weapon of language to thwart the fiercest enemy the free people have ever known and made a difference …join me in applauding their perseverance and the deeds that have been relegated to legend and may they now live in memory,” said Boehner.

Native American Congressman Tom Cole then shared his thoughts. “It is an enormous honor for me to get to share this moment with you – no one has fought against an alliance like Native Americans. Native Americans enlist at a higher rate than any ethnicity in this land. Most famous of those warriors are the Navajo code talkers of World War II, but 33 different tribes contributed to the code talkers.”

“From my home state of Oklahoma three are Choctaw, Comanche and Kiowa they saved lives and won battles. They did so by giving the United States the unique battlefield advantage of secure communication,” said Cole.

Similar appreciative sentiments were also given by Kind, Johnson, McConnell and Inhofe who also described ways code talkers were critical to war efforts. Their descriptions included how code talkers could decipher their messages instantly with 100 percent accuracy, while machines took up to 30 minutes to decipher alternative codes. Also, more than 800 battlefield communications were shared in the first 48 hours of Iwo Jima. Several speakers mentioned that code talkers enlisted at a time when they were not even honored as citizens.

Pelosi expressed appreciation for representing California as a state with the highest percentage of Native Americans before thanking the code talkers.

“The code talkers, using their language… committed to the cause of freedom. Their sense of duty was never shaken nor was their resolve. Their patriotism never wavered nor did their courage. Their bonds of brotherhood were never broken nor were their codes. Their heroism and sacrifice and these contributions went unrecognized for too long. It is a privilege for Congress to bestow the Native American code talkers the highest honor we can bestow, the Congressional Gold medal,” said Pelosi.

After Pelosi, Senator Reid delivered a poignantly truthful account of the history of Native people and their contribution to the war efforts of the United Sates.

“Strangers had forced the Native peoples from their lands slaughtered their game, stifled their religions outlawed their ceremonies and ravaged their communities…in the late 1800s, the United States government forced Native American children to attend English only boarding schools. Native children were torn from their families, taken far from home in boxcars and buggies, given English names, forced to cut their hair short and teachers beat the children with leather straps when they spoke their Native languages. The government told them their language had no value, but the children held onto their language, culture and history at great personal risk.”

“In this nation’s hour of greatest need these same Native American languages proved to have great value in the early years of World War II…Why would Native Americans, who had been robbed of their land and their culture agree to use their precious language to protect the country that had neglected and abused them for centuries? As one Navajo Native American code talker by the name of Chester Nez put it, ‘Somebody has got to defend this country, somebody has to defend freedom,” said Reid.