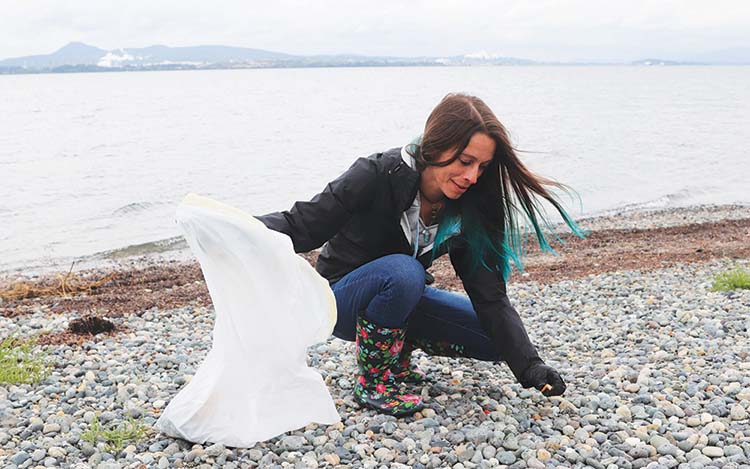 The traditional Tulalip story, the Seal Hunting Brothers told by Martha Lamont, is the story of two young Tulalip men who lived at Priest Point. The brothers would travel the Salish Sea hunting for seals, salmon and shellfish for the entire community. The brothers prepared and delivered plates of fresh seafood to the elders as well as to their sister and her family, informing their sister to save some food for her husband, who was a carver and often away from home. The sister, however, disregarded her brother’s advice and distributed her husband’s share amongst herself and her children.

When the carver returned home, there was no food in sight. He asked his wife if her brothers dropped off any food for the family while he was away, to which she replied no. Upset at this news, the carver constructed a lifelike seal carved from cedar and enchanted the structure with magic to trick the brothers. They took the bait. The brothers harpooned the cedar seal statue while on a hunt and were pulled deep into the ocean only to wash ashore days later, miles away from home. Realizing what their brother-in-law did, they began their long journey home where they were presumed to be dead.

Upon their return to Tulalip, the brothers shared their story with their family and decided because of the complexities of the situation, they should live away from the tribe. They chose to begin a new life upon the waters that long provided food for their community, the Salish Sea, and became killer whales. Their descendants are said to be the southern resident orcas that still frequent the Salish Sea waters searching for Chinook salmon.

Similar stories of the brothers are shared within Indigenous communities all along the waterways of the Salish Sea, comprised of the waters now known as the Strait of Juan de Fuca, Puget Sound and Strait of Georgia. As the story goes, the brothers chose to stay close to home and often provided seafood to the Coast Salish peoples in times of famine.  The story teaches many important values of the Northwest tribes as well as explains our strong connection with the orca, who is often honored within the culture through stories and artwork.

The southern resident orcas are intelligent, sociable mammals who share a lot of the same values and traditions of the Coast Salish people. For instance, the southern resident orcas are known to perform ceremonial practices during social gatherings when all three pods, J, K and L, meet up, which is known as a superpod. The most recent superpod was held last week in the waters near Vancouver Island where footage of the gathering was caught by the locals and tourists of Victoria, British Columbia. The orcas also travel with the same pod for their entire life, relying on each other’s strengths within a multi-generational family, much like many Native communities.

Another similar interest we share with the orcas is our love for salmon. The importance of salmon to Coast Salish people has been well documented over the years and is integral to each tribe’s way of life. The tribes of Washington State were guaranteed fishing rights when signing the treaties with the United States Government in exchange for land. Since the Fish Wars, the Boldt Decision, and even up until today, tribes exercising that right have been met with a number of challenges. 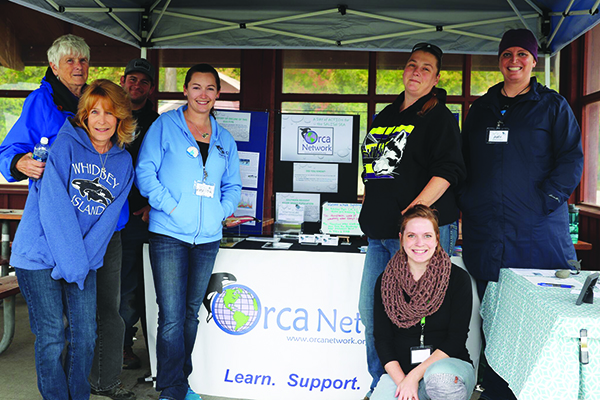 Over recent years, the salmon population has seen a dramatic decline. A number of manmade dams and blocked culverts are preventing salmon from swimming upstream during spawning season and less salmon are returning each year. In fact, many tribes opted not to fish this season in hopes more salmon will spawn and increase salmon population. Pollution remains another constant concern for aquatic life in the Salish Sea with chemicals and waste pouring into the waters from storm water runoff and local ferries traveling the straits. The lack of salmon has caused tribes to stray from their traditional diets and therefore more tribal members are faced with health concerns.

The same can be said about the southern resident orcas. The lack of salmon and polluted waterways caused some serious health concerns for the whales including reproduction. The orcas are crying out for help. This past summer’s heartbreaking story about southern resident orca, Tahlequah (J35), carrying her dead newborn calf for seventeen days on a ‘tour of grief’ caused tears across the entire nation. And the recent proclamation of Scarlet’s (J50) death is further evidence that we need to take immediate action.

In the sixties and seventies, a third of the southern resident population were hunted at a young age and held captive at marine life amusement parks like SeaWorld. Orcas often live well past their eighties, but unfortunately all but one of the orcas captured have died at a young age. Tokitae, the last remaining poached orca, resides at the Miami Seaquarium and the Lummi tribe has been fighting for years to return the whale to the Salish Sea.

As a result of starvation, theme park poachings and pollution, the southern resident orcas were placed on the endangered species list in 2005 after a significant drop in population of nearly twenty orcas over the course of a decade. Since then, the number of orcas has been steadily declining. With the passing of Scarlet, only seventy-four orcas remain.

Because of the recent news, Washington State Governor Jay Inslee established a southern resident orca task force whose main focus is orca protection and recovery. Members of the task force include representatives from Washington state, a handful of tribes and the National Oceanic and Atmospheric Administration (NOAA). The passing of both J35’s calf and J50 is opening up an important conversation about respecting Mother Earth and taking care of the environment. More and more citizens are participating at rallies in support of the salmon and orca such as the Festival of the Steh-Chass in Olympia and the Salmon Celebration in Seattle. The most recent effort united over thirty communities throughout Washington state and British Columbia.

September 15 marked International Coastal Cleanup day, where seaside communities participated in clearing their local beaches of any trash or harmful products. Communities of the Salish Sea, along with a number of non-profits like 350 and the Orca Network, banned together to tailor International Coastal Cleanup day to the Pacific Northwest communities by organizing Salish Sea Day of Action, which provides information and resources about the state of the Salish Sea, the southern resident orcas and the salmon habitat at the cleanup events.

Citizens of Tacoma, Port Townsend, Edmonds, Shoreline, Bellingham, Lopez Island and Mount Vernon, as well as Victoria and Vancouver, gathered in their respective hometowns to clean the beaches, offer prayer, honor and thank the water for its plentiful resources on the rainy Saturday morning.

“Today is a day of action for the Salish Sea and we wanted to join in,” says Amanda Colbert of the Orca Network at the Action for Orcas event in Mount Vernon. “It’s also International Costal Cleanup so there are quite a few events all up and down the coast with multiple organizations. Orca Network decided we wanted to be a part of this because, as you know, any trash, pesticides and chemicals that wind up in any of our rivers eventually leads to the ocean. I’ve run a beach cleanup once out here before and I just thought that this would be another wonderful opportunity to jump in and get the community on board.”

The Orca Network event attracted many participants and the sands of the Bayview State Park in Mount Vernon were trash free in no time. During the cleanup, attendees passionately spoke of protecting the environment and the southern resident orcas. 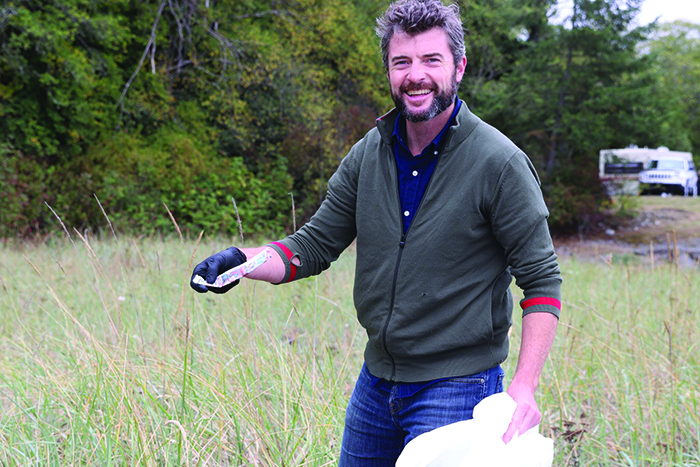 “The oceans are definitely in trouble,” says Ryan Rickerts of Bellingham. “Most of the planet is covered by water, it’s our source of everything. Coming here today is a way for me to connect and give back a little bit. The orcas are in real big trouble, so I wanted to be around likeminded people that care about the ocean, the orcas and wanted to do something to help. Hopefully we keep this up; good energy is building. With the orcas that have been dying, hopefully that creates a sense of urgency for people to get together. The Swinomish hosted the orca task force meeting a couple weeks ago and I think it’s good for people to come together to keep talking about it and try to find solutions. We have to take action and it helps to have conversations and get everybody at the same table because it’s going to take everyone.”

Tulalip tribal member and Water Protector, Kayah George, hosted a prayer service the day following Salish Sea Day of Action where she shared spiritual and cultural teachings about the water during Sunday worship at the Woodland Park Presbyterian Church.

“What concerns me about what’s happening in the Coast Salish Sea is the same thing that has been concerning my people for hundreds of years,” Kayah passionately expressed in a video leading up to Salish Sea Day of Action and her prayer service. “It is the disrespect. The utter and complete lack of respect for our brothers and sisters in the sea and for the sea itself. It’s not seen as a living thing; they see it as something that’s disposable.”

The number of supporters at the Salish Sea Day of Action events shows that people are beginning to listen to the calls for help by the beautiful coastal killer whales. And through a combined effort, we can all make a difference in protecting the orcas by restoring the salmon habitat, and that begins with the removal of dams, culvert repairs and environmental awareness.

“There are plenty of ways that people can start,” shares Amanda. “A lot of it is being focused on what you buy at the grocery stores. There are cleaner, greener products out there that are biodegradable. We have to move away from single use products. A lot of what was picked up here today was plastic wrappers, straws and cups that are only used once. So it’s helpful anytime anybody can pick up a water bottle or a green bag. If you don’t want to give up straws, there are companies making reusable metal or BPA-free plastic straws. What we treat our lawns with also has a huge impact. We get a lot of rain here so a lot of things end up in the storm drains. I’m thankful for all the volunteers that came out today and for the opportunity to reach and talk to people about our southern residents and what they’re going through.”

To stay up to date on the southern resident orcas, please visit www.OrcaNetwork.org or check out the Department of Ecology at www.ecology.wa.gov to find out more about the Orca Task Force, Salish Sea spills and cleanups, salmon recovery and upcoming meetings and events.