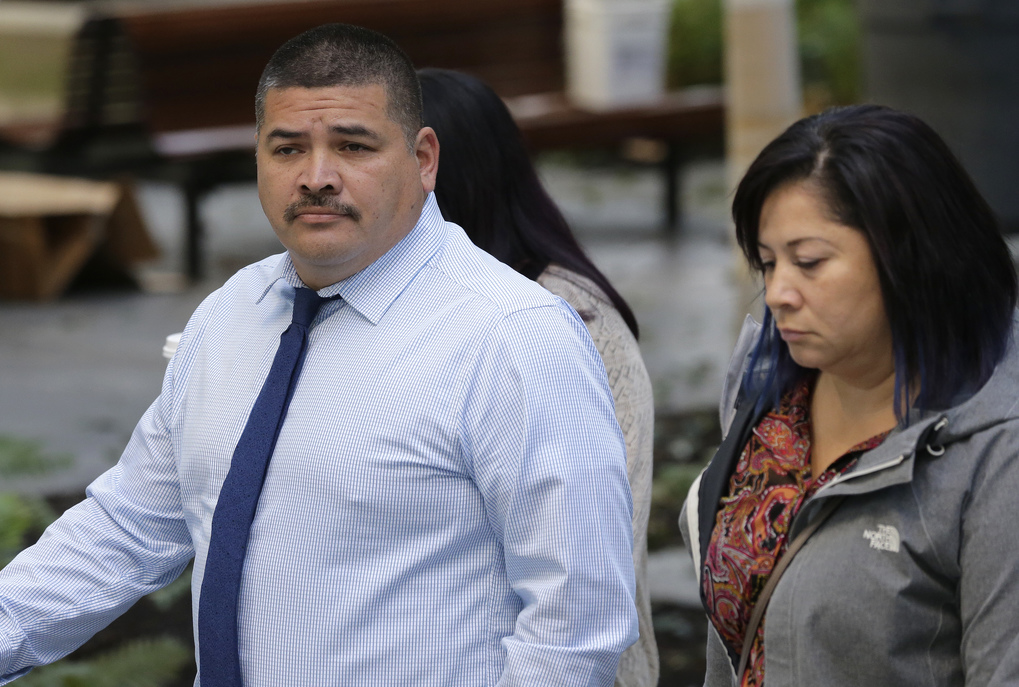 Raymond Fryberg, left, the father of the Washington state teenager who fatally shot four classmates and himself at Marysville-Pilchuck High School in October 2014, arrives at the federal courthouse in Seattle, Monday, Sept. 21, 2015. (AP Photo/Ted S. Warren)

The father of the Marysville school shooter was found guilty of federal firearms charges in U.S. District Court in Seattle.

The father of the teen who killed four classmates at Marysville-Pilchuck High School last fall was convicted Tuesday of illegally possessing a half-dozen firearms, including the one his son used in the shooting.

Raymond Lee Fryberg Jr. was convicted of six counts of unlawful possession of a firearm. One of the firearms, a .40-caliber Beretta pistol, was used by 15-year-old Jaylen Fryberg to kill four classmates and wound a fifth. Jaylen then killed himself with the same handgun.

The federal jury deliberated for about a day after a three-day trial before U.S. District Judge James Robart.

The senior Fryberg appeared stunned by the verdict. He had tears on his cheeks as he huddled with his attorneys and family after the verdict was read.

Fryberg will remain free until sentencing, which is scheduled for Jan. 11. He faces up to 10 years in prison for each count.

Family members of some of the shooting victims sat behind the prosecutors when the verdict was read. They declined to comment as they walked in silence into an elevator on the 14th floor of the U.S. District Courthouse. After the doors slid shut, however, ebullient yells and whoops could be heard.

Fryberg’s Seattle attorney, John Henry Browne, said the criminal charges were retaliation for the school killings and had been “pushed by the families” of the victims.

While the school shooting was never mentioned during the trial, Browne said it hung over the proceedings like a pall.

“It was difficult to stay on task,” he said outside the federal courthouse.

While the sole issue was whether Fryberg knew he was barred from owning firearms, Browne said, prosecutors began their closing arguments Monday with a slideshow of the six firearms Fryberg had purchased, including the handgun used by his son.

“This was clearly piling on by the government,” said Browne, who intends to appeal the verdict.
A grand jury had alleged the senior Fryberg, a member of the Tulalip Tribes, purchased a number of firearms despite being the subject of a tribal domestic-violence protective order that had been issued in 2002. Fryberg, 42, pleaded no contest in tribal court to violating the order in 2012, according to federal prosecutors.

The government says that should have prevented him from purchasing firearms, but that flaws in the instant-background-check system allowed him to “slip under the screen” of several law-enforcement databases.

Prosecutors claimed Fryberg lied when he filled out firearms-purchase forms on which he declared, under penalty of perjury, that he had not been convicted of a domestic-violence crime.

During the trial’s closing arguments, Browne accused the government of appealing to the jury’s emotions by showing photographs of each of the six firearms — including the handgun used in the school shootings and two assault-style semi-automatic rifles — that Fryberg had purchased at the Cabela’s store in Tulalip after 2012.

Fryberg, Browne said, assumed the purchases were legal and pointed out that he was even able to obtain a concealed-carry permit for a handgun, which requires a more stringent background check than purchasing a firearm. Browne said Fryberg was never properly served with the protection order, and that there were questions about whether the order was ever filed with the court.

The police officer who was supposed to file it — who was the brother-in-law of Fryberg’s ex-girlfriend, who had sought the order — is dead.
Fryberg claimed he was never given a copy of the order and did not know it existed, despite his no-contest plea in 2012.

“He is not on trial for anything else,” Browne said. “Not for how many guns he owns,” or what they may have been used for. The government, he claimed, “is trying to turn this case into something it is not.”

Assistant U.S. Attorney Ye-Ting Woo said the issue was not whether Fryberg was able to purchase the guns because of “gaps in the system,” including the fact that tribal-court domestic-violence protective orders and convictions often are not entered into national databases.

“The system relies on the purchasers to tell the truth,” she said.

The investigation into Fryberg’s gun ownership began in October 2014, when the FBI was trying to determine ownership of the gun that was used in the school shootings. The senior Fryberg had purchased that gun from Cabela’s in January 2013, a year after a permanent protective order against him had been filed in Tulalip Tribal Court, prosecutors said.

A 1,400-page report detailing the investigation into the school shooting said Jaylen Fryberg apparently brought the handgun to school in a backpack. He texted several friends to meet him in the lunchroom that day, Oct. 24, and also sent a text to his father and other family members detailing his funeral plans.

Minutes later in the cafeteria, Jaylen Fryberg pulled out the Beretta handgun from the backpack and shot five classmates, killing Zoe Galasso, Gia Soriano and Shaylee Chuckulnaskit, all 14, and Andrew Fryberg, 15. All were shot in the head.

Nate Hatch, 15, was shot in the jaw and spent about two weeks in Seattle’s Harborview Medical Center.

The report indicates that Fryberg was angry over a breakup with a girlfriend, as well as a fight he had with a fellow student in the days before the shooting.

However, the team of investigators said it could not determine a definitive reason for the shooting.