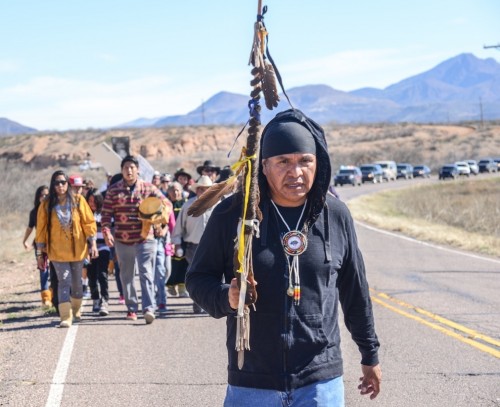 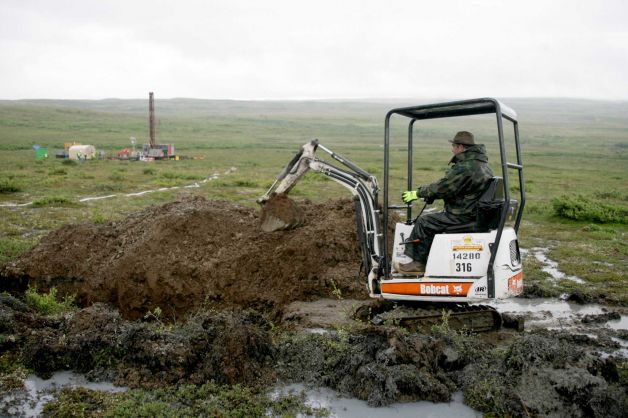 FILE- In this July 13, 2007 file photo, a worker with the Pebble Mine project test drills in the Bristol Bay region of Alaska near the village of Iliamma, Alaska. An EPA report indicates a large-scale copper and gold mine in Alaska’s Bristol Bay region could have devastating effects on the world’s largest sockeye salmon fishery and adversely affect Alaska Natives, whose culture is built around salmon. Photo: AL Grillo, AP

JUNEAU, Alaska (AP) — A government report indicates a large-scale copper and gold mine in Alaska’s Bristol Bay region could have devastating effects on the world’s largest sockeye salmon fishery and adversely affect Alaska Natives, whose culture is built around salmon.

The U.S. Environmental Protection Agency on Wednesday released its final assessment of the impact of mining in the Bristol Bay region. Its findings are similar to those of an earlier draft report, concluding that, depending on the size of the mine, up to 94 miles of streams would be destroyed in the mere build-out of the project, including losses of between 5 and 22 miles of streams known to provide salmon spawning and rearing habitat. Up to 5,350 acres of wetlands, ponds and lakes also would be lost due to the mine footprint.

The report concludes that “large-scale mining in the Bristol Bay watershed poses significant near- and long-term risk to salmon, wildlife and Native Alaska cultures,” EPA regional administrator Dennis McLerran said in a conference call with reporters.

The battle over the proposed Pebble Mine has been waged for years and extended beyond Alaska’s borders, with environmental activists like actor Robert Redford opposing development. Multinational jewelers have said they won’t use minerals mined from the Alaska prospect, and pension fund managers from California and New York City last year asked London-based Rio Tinto, a shareholder of mine owner Northern Dynasty Minerals Ltd., to divest, a request Rio Tinto said it planned to consider.

EPA has said its goal was to get the science right. McLerran said the report doesn’t recommend any policy or regulatory decisions and will serve as the scientific foundation for the agency’s response to the tribes and others who petitioned EPA in 2010 to use its authority under the Clean Water Act to protect Bristol Bay. He said no timeline for a response had been set.

The report also found that polluted water from the mine site could get into streams through runoff or uncollected leachate, even with the use of modern mining practices. It noted culvert blockages or other failures could impede fish passage and failure of a tailings dam, where mining waste is stored, could be catastrophic though the probability of such a failure was considered quite low.

Supporters of the EPA process hoped it would lead the agency to block or limit the project, action they urged again Wednesday; opponents saw it as an example of government overreach and feared it would lead to a pre-emptive veto.

Jason Metrokin, president and CEO of Bristol Bay Native Corp., said the corporation supports “responsible development where it can be done without causing unacceptable risks to the people, cultures and fishing economy of our region. The proposed Pebble mine is not such a project.”

John Shively, the chief executive of the Pebble Limited Partnership, which was created to design, permit and run the mine, called the report rushed and flawed, saying EPA did not take the time or commit the financial resources to fully assess such a large area. In a statement, he said the report is “a poorly conceived and poorly executed study, and it cannot serve as the scientific basis for any decisions concerning Pebble.”

Some see the mine as a way to provide jobs, but others fear it will disrupt or devastate a way of life. A citizens’ initiative scheduled to appear on the August primary ballot would require legislative approval for any large-scale mine in the region.

The Bristol Bay watershed produces about 46 percent of the world’s wild sockeye salmon, and salmon are key to the way of life for two groups of Alaska Natives in the region, Yup’ik Eskimos and the Dena’ina. The report said the response of Native cultures to any mining impacts was unclear, though it could involve more than the need to compensate for lost food and include some degree of cultural disruption.

Jeff Frithsen, a senior scientist and special projects coordinator with EPA, said the Pebble deposit is a low-grade ore deposit, and over 99 percent of the ore taken from the ground will end up as waste. He said the deposit’s location is at the headwaters of two of the watersheds that make up half the Bristol Bay watershed and produce half its sockeye salmon.

He said the existence of a large-scale mining operation there would affect fish habitat and any accidents would add to that. He said any loss of habitat can affect the overall diversity of the fishery habitat in the watershed.

“Changes in the portfolio of streams within the Bristol Bay watershed can reduce the overall reliability and increase the variability of the fishery over time,” he said.

Asked whether EPA believed a mine could co-exist with fish, McLerran said the assessment spoke for itself.

While EPA initiated the review process in response to concerns about the impact of the proposed Pebble Mine on fisheries, the report wasn’t meant to be about a single project.

EPA said the report looks at possible impacts of reasonably foreseeable mining activities in the region. The agency said it drew on a preliminary plan published by Northern Dynasty and consulted with mining experts on reasonable scenarios.

Alaska Gov. Sean Parnell said in a statement the report was little more than a pretext for an EPA veto of the state’s permitting process. “As my record demonstrates, I will not trade one resource for another, and every permitting application — when filed — deserves scientific and public scrutiny based on facts, not hypotheticals.”

While EPA focused on the effects of one mine, the report said several mines could be developed in the watersheds studied, each of which would pose risks similar to those highlighted.

To read the assessment: http://www2.epa.gov/bristolbay