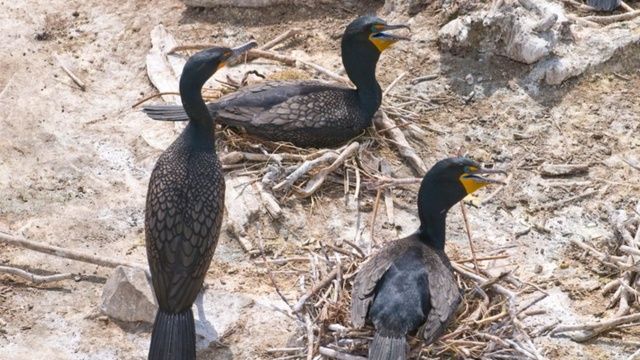 PORTLAND — The public got its first chance to weigh in on the government’s plan to kill nearly 16,000 cormorants nesting on an island near the mouth of the Columbia River.

The U.S. Army Corps of Engineers has proposed the lethal approach as the best way to reduce the number of birds that congregate at East Sand Island and feast on young salmon and steelhead making their way beyond the Columbia River to the Pacific Ocean.

Supporters and critics spoke out Thursday at the Matt Dishman Community Center in Northeast Portland.

State and federal officials discussed the proposed action with around 40 attendees, many representing bird and wildlife advocacy groups or sportfishermen.

Norman Ritchie is with the Association of Northwest Steelheaders. He said the cormorants are severely harming the fish runs on the Columbia.

“Right now the situation’s pretty bad,” Ritchie said. “We’re talking millions upon millions of smolts being killed by the cormorants each year and we need to deal with that.”

Columbia River tribal representatives have also voiced support for killing cormorants to protect salmon and steelhead, although none spoke out at Thursday’s hearing.

Scientists estimate cormorants on East Sand Island ate 18 million protected salmon and steelhead last year and are regularly consuming 10 to 15 percent of the populations swimming through the Columbia River estuary.

Joyce Casey is with the U.S. Army Corps of Engineers. She said her agency is following the National Marine Fisheries Service’s call for a reduction in cormorants.

The service’s biological opinion for the Columbia River hydropower system gives until 2018 to reduce 14,900 breeding pairs of cormorants down to less than 5,900 breeding pairs. The goal is protect salmon and steelhead listed under the Endangered Species Act. The fish also die by the thousands as they try to get past dams operated by the corps.

The cormorant-killing strategy would be in place from 2015 to 2018. Shotguns would be used to shoot the cormorants in the air first and, if necessary, on the colony during nesting season.

Kahler Martinson is an Audubon Society volunteer and former regional director with the U.S. Fish and Wildlife Service. Martinson argued that the corps is blaming the birds rather than the dams on the Columbia.

“There’s got to be a better way to do it than killing these birds,” Martinson said. “If you manage the river for fish instead of for power and navigation you can certainly handle the problem.”

The corps says the reduction in cormorant population would be localized and would not jeopardize the larger population.

A second public meeting will be held July 24 in Astoria, Oregon.

The final environmental impact statement will be published this fall. The final decision is expected by the end of the year.