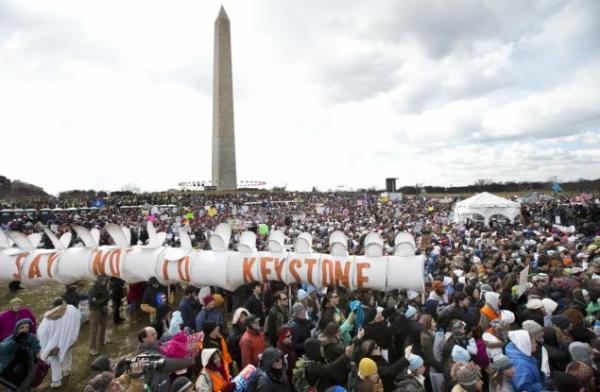 Next week, April 22, former Green Party Vice-Presidential candidate Winona LaDuke and the Cowboy and Indian Alliance made up of Native people, farmers and ranchers will ride on horseback into Washington, D.C. to show their opposition to the Keystone XL pipeline.

The protest on Tuesday will be one of many activities kicking off Earth day 2014 at the National Mall in Washington, D.C. LaDuke’s organization, Honor the Earth will be joining forces with the Cowboy and Indian Alliance a group of about 30 Oglala Lakota Indians as well as a group of non-Native ranchers and farmers from North Dakota and Nebraska that have all joined forces in protest.

Additionally on the final day of protest, thousands have been invited to protest in unison against the pipeline and the Canadian Tar Sands. On Saturday April 26 at 11 a.m. at the National Mall between 7th and 9th streets, the Cowboy and Indian Alliance will make closing arguments against the pipeline.

4 days after the Cowboy Indian Alliance tipis first go up on the Mall, we’ll gather at 11 AM on Saturday the 26th at the encampment to make our closing argument against the pipeline. As we gather, everyone there will be asked to make their thumbprint mark on a tipi. Then we’ll hear from the farmers, ranchers, tribal leaders and refinery community members who will be directly impacted by Keystone XL and the tar sands — and who have pledged to lead the resistance should it be approved.

Then, those leaders will carry our painted tipi to present to President Obama, with thousands of people standing behind them. This tipi will represent our hope that he will reject the pipeline, and our promise that we will protect our land, water and climate if he chooses to let the pipeline move forward.

Once the tipi is delivered, we’ll return to the encampment in song and make our pledge to continue resistance to the pipeline should it be approved.

In an e-mail campaign sent from the Honor the Earth Foundation LaDuke writes that many opposers to the pipeline will be in D.C. and will set up at the tipi camp at the National Mall and will ride to the White House “to show Obama and the world that Native Nations will stand firm in asserting our human and constitutionally protected treaty rights in saying NO to the Keystone XL Pipeline.”

In an interview with ICTMN, LaDuke said, “Our communities are continuing our spiritual work in opposing these pipelines – these pipelines threaten our water and our way of life.”

“My sister and my son will be riding horses, I might ride. They have asked me. There will be 30 Cowboys and Indians on horseback going all the way up to the White House on horseback to fight the Keystone pipeline. This is a continuation of that spiritual ride,” LaDuke said.

“To not have the pipeline is what we want, every time you look there is someone else at the White House. President Obama should do the right thing. I have enjoyed the fossil fuels era as have you, but I would like to gracefully exit it not crash my way out. We need to gracefully exit into renewable energies fuel efficiencies and bio diesels with a lot less impact. I have enjoyed it now I’m ready to go.”

LaDuke also said how people can support the cause. “They can support all of this by joining us in D.C. and sending us money, we are in the middle of fighting three pipelines and we are thinly staffed.”