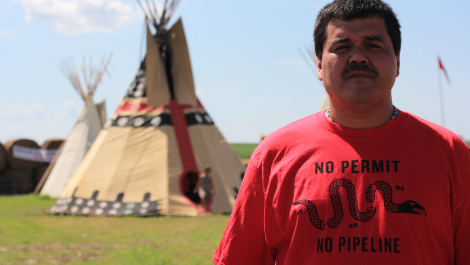 This past weekend, on June 29, TransCanada’s permit from the South Dakota Public Utilities Commission to build the Keystone XL pipeline quietly expired.

Well, sort of quietly. The Cowboy & Indian Alliance, which marched on Washington in opposition to Keystone XL earlier this year, held a celebratory buffalo roast at the Rosebud Sioux Spirit Camp and raised a flag with an image of a black snake cut into three parts.

The flag referenced an old prophecy about a black snake that would threaten the community’s land and water. Earlier interpretations had held that the snake was the railroad, and then the highway system. But when the plans for Keystone XL emerged, it seemed clear that, since both black snakes and Keystone XL traveled underground, this was definitely the black snake — or at the very least another one.

With South Dakota’s permit expired, Nebraska’s held up in litigation, and Montana blocked from the already-completed portions of Keystone XL in Kansas by South Dakota and Nebraska, the snake is cut up in three parts, at least for now.

The expired permit means that TransCanada will have to go through the application process all over again, facing a much more unified resistance than it did the first time around. The fracking boom in places like North Dakota will also make it much harder for TransCanada to argue — as it did the first time around — that Americans need Canadian crude so urgently that a Canadian pipeline company should be given powers of eminent domain to bring it here.

Keystone XL could still get built, of course. But as time goes on, and the date of the State Department’s yes/no ruling on it keeps getting pushed farther and farther into the future, it seems less and less likely.

KXL’s opponents shifted the balance of power by using many different tactics at once — massive national protests; small-scale civil disobedience along the path of the pipeline’s construction; and grassroots politicking and organizing at the local level by groups all along the pipeline’s proposed route.

The fight against the pipeline is a vindication of the “everything but the kitchen sink” school of organizing, where small groups — like the Cowboy & Indian Alliance — join forces with other organizations for large short-term events, but continue working solo on the kind of gradual, incremental struggles that take years. This is not the kind of organizing that makes it into the history books, because its story is complex and it often lacks obvious heroes. But it’s an approach that, at least in this case, is making history.