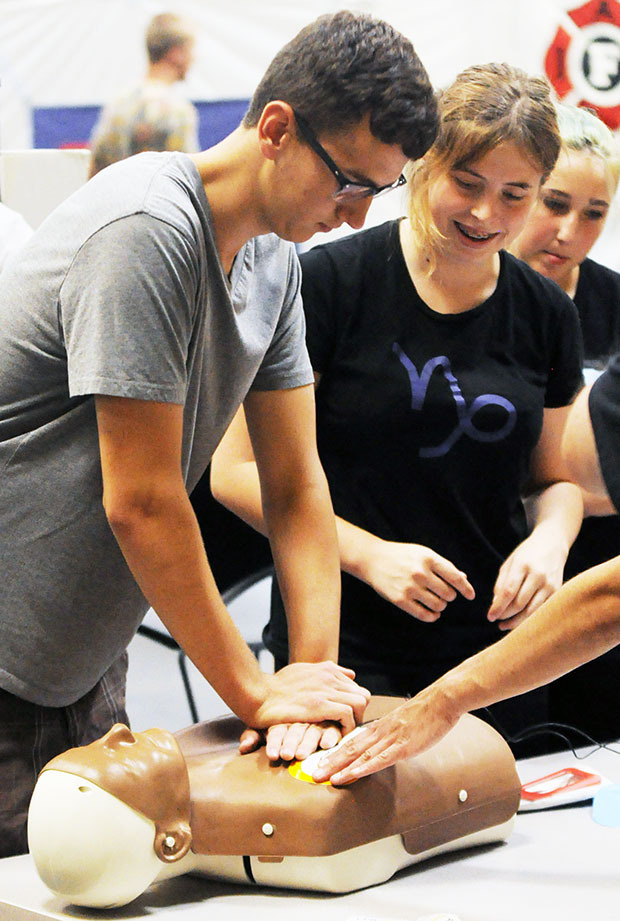 MARYSVILLE — The Marysville School District was visited by the Nick of Time Foundation at Marysville Getchell High School.

The school district was on the wait list for three years, and they decided that the MG campus would be the best meeting ground for Marysville students this week.
Nick of Time aims to raise awareness of sudden cardiac arrest, the leading cause of death in young people during exercise.
Nick of Time travels to various schools in Washington to promote its message.
“Kids need to know that their hearts are healthy,” executive director Darla Varentti said.
Varentti’s son, Nicholas “Nicky” Varrenti, was a victim of sudden cardiac arrest.  The 16-year-old was a standout football player for Mill Creek High School in 2004, but died of sudden cardiac arrest in his sleep.
The foundation was started in 2006 to educate students and schools about the risk and procedures dealing with sudden cardiac arrest.
Students from MG, Marysville-Pilchuck and Tulalip Heritage were scanned for potential heart defects, trained in CPR and the use of the automated external defibrillators.
“The AED is the only thing that can save you during a cardiac arrest,” Varrenti said.
Doctors use an echograph and sonograph to look for electrical and structural anomalies in the heart that could trigger a cardiac arrest.
“You can’t just hear it,” Varrenti said. “You have to see it.”
“I got to talk to a doctor, and I want to be one someday so that’s really cool,” M-P senior David Gloyd said. “And I learned to do CPR.”
Varrenti was pleased with the turnout.
“It’s been great. We’re really happy,” Varrenti said. “We had close to 400 kids today.”