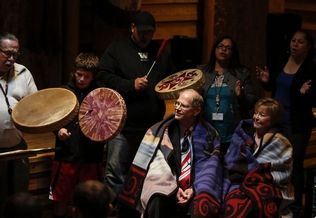 Nick Adams / The Herald
Marysville School District Superintendent Larry Nyland and Assistant Superintendent Gail Miller listen to songs by the Tulalip Tribes during a retirement party at the Hibulb Cultural Center on May 30. Both school officials are retiring.

MARYSVILLE — No matter what side they were on in the fall of 2003, most people agree that the divisive 49-day teachers strike in the Marysville School District took a toll on the community.

When he started in the summer of 2004, then-new Superintendent Larry Nyland set out to meet individually with more than 700 people. His first goal, he said, was to “restore relationships.”

Many of those in attendance at Nyland’s retirement reception May 30 at the Hibulb Cultural Center talked at length about Nyland’s work to heal the district and to get results from the school board, the administration, the teachers, the district’s 11,000 students and the people of Marysville and Tulalip.

“When Larry got here, it was the right time,” McCoy said. “He was successful at calming things down and getting the district back on an even keel.”

Nick Adams/ The Herald
Marysville School District Superintendent Dr. Larry Nyland and Assistant Superintendent Gail Miller listen to songs by the Tulalip Tribes during a retirement party at the Hibulb Cultural Center on May 30. Both school officials are retiring.

In his role in the state Legislature, McCoy said he heard frequently from Nyland regarding school funding and other issues.

“Larry had no problem telling me what was on his mind, and I like that,” McCoy said. “I hope our new superintendent is outspoken, too. She can call me anytime.”

Becky Cooke Berg is scheduled to start her new job as superintendent of Marysville schools on July 1. Berg, who has a doctorate in education, is moving here from her job as the superintendent of the Deer Park School District near Spokane. A meeting to give the public a chance to meet Berg is set for 4 to 6 p.m. Monday at the school administration office before the regular school board meeting.

Nyland, who served nine years in Marysville, said his last days with the school district this month are “bittersweet.”

Most of the Marysville high school graduations are over for the year. Nyland said he is proud that the graduation rate in the district rose 20 percentage points during his tenure.

“My passion is student learning and I think we’ve had notable achievements in the past nine years,” he said. “It’s not just about better test scores. It’s about the skills students take away when they graduate.”

Nyland began teaching in 1971 in Gig Harbor and served as a superintendent in Alaska and elswhere in Washington before taking the job at Marysville.

Under Nyland, voters began passing school levies again, and in 2006 they approved a $120 million bond package in 2006 that helped build Grove Elementary School and Marysville Getchell High School. In 2007, Nyland was named the state’s superintendent of the year.

Assistant Marysville Superintendent Gail Miller also is retiring at the end of this month after nine years with the district.

“There was no better superintendent to work with and no better place to end my career than with Larry in Marysville,” Miller said. The Tulalip Tribes hosted the reception for Nyland and Miller, and Tribal Chairman Mel Sheldon served as the master of ceremonies.

“Gail and Larry brought to the table compassion and an understanding of the tribes,” Sheldon said. “They were team players, and we are eternally grateful for the relationships that were made.”

Arden Watson, who has served as head of the teachers union in Marysville, said that from the start Nyland had a clear desire to work with teachers and all staff of the district.

“We haven’t always agreed on everything, but we worked collaboratively,” Watson said.

School Board President Chris Nation said Nyland stood by the board and made Marysville a better district.

“At a time of turmoil and mistrust, Dr. Nyland got us back on track,” Nation said. “We aspire to be like Larry.”

Marysville Mayor Jon Nehring said the partnerships between the school district, the tribes, the business owners and the city to benefit students were encouraged by Nyland.

“Because there is no bigger priority than our children,” Nehring said.

Aaron Reardon has yet to formalize his resignation, which muddles the process for an appointment and election.

By Noah Haglund, The Herald

EVERETT — The timing of Snohomish County Executive Aaron Reardon’s May 31 resignation has been a head-scratcher since he announced it in February.

If Reardon had opted to step down before the official candidate-filing period began this week, the county could have scheduled a special election in November to fill the two-plus years remaining on his term.

Sunday came and went, without Reardon sending a letter to the County Council formalizing his resignation.

That means whoever is appointed to fill Reardon’s job will serve unchallenged at least into November 2014, when results are certified in a special election expected next year.

Here’s a breakdown of the appointment process:

•Because Reardon is a Democrat in a partisan elected office, the law says it’s up to Snohomish County Democrats to pick three nominees to replace him. The county party’s central committee will forward the names to the County Council.

For the council to start the process, it needs to have written notice from the executive. That had not occurred as of Monday afternoon. Reardon never answered a May 2 letter from the council asking him to submit the letter and make good on his promise to create a seamless transition.

The County Council will have 60 days from the date of the vacancy to make a final selection. If a majority of the council is unable to choose an appointee, the task goes to the governor, who has 30 days to make a decision.

Under the county charter, Reardon’s deputy executive, Gary Haakenson, would be the acting executive for any period between Reardon’s departure and the appointment of his successor.

A special election to fill the remainder of Reardon’s term would occur on Nov. 4, 2014.

The person appointed executive can run in the special election and will serve until those results are certified. That’s due to happen on Nov. 25, 2014.

An election for the full, four-year term is scheduled in 2015.

The appointment and the special election would not count toward the candidate’s term limits. An executive may serve no more than three consecutive four-year terms.

So far, Snohomish County Sheriff John Lovick and state Rep. John McCoy, D-Tulalip, have put forward their names seeking the position. Lovick appears to have sewn up support from a majority of local Democrats. The party continues to seek a third nominee, said Richard Wright, chairman of Snohomish County Democrats.