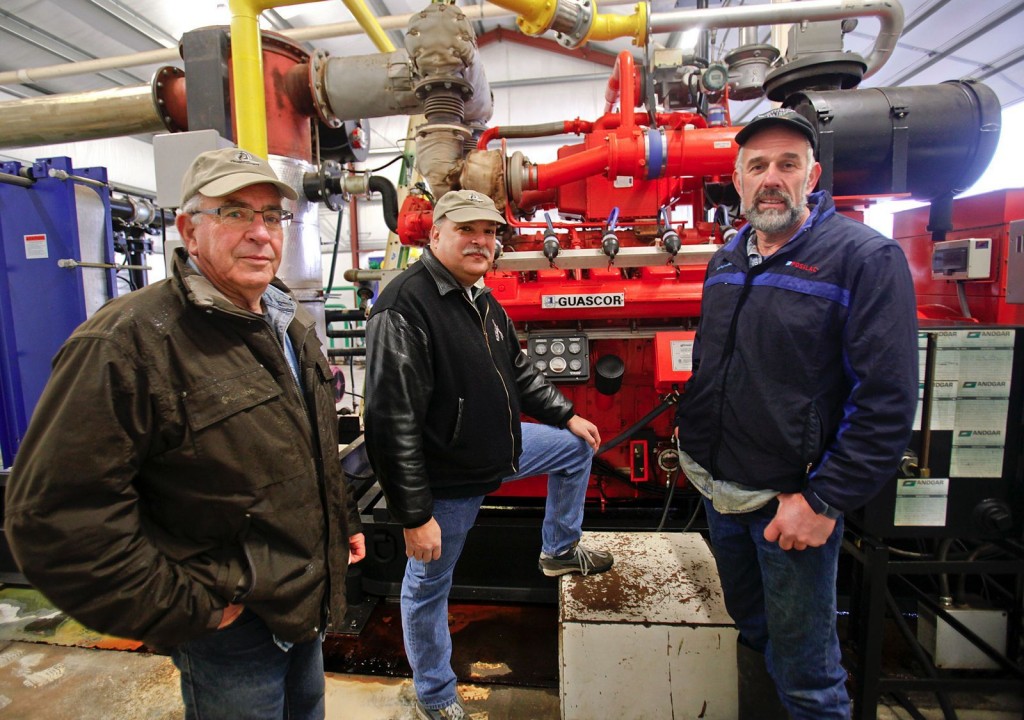 MONROE — For the past five years, 300 homes outside Snohomish County have been powered by cow manure from farms near Monroe.

For the next five years, that power will stay in the county.

Qualco Energy, which runs a biogas plant south of Monroe, has been selling its power since 2009 to Puget Sound Energy.

The PUD “was able to offer a better rate than PSE did,” said Daryl Williams, environmental liaison for the Tulalip Tribes and a Qualco board member.

Qualco is a nonprofit formed by three groups: the energy division of the Tulalip Tribes; Northwest Chinook Recovery, a salmon advocacy group based in Anacortes; and the Sno/Sky Agricultural Alliance, a farmers’ group based in Monroe.

Qualco was created after cattle farmer Dale Reiner wanted to use a piece of property he’d purchased but was concerned about flooding and environmental effects on nearby streams.

He worked with Northwest Chinook Recovery on a fish habitat restoration project. Haskell Slough — a former main channel of the Skykomish River that had been diked off to create farmland — was restored into a salmon spawning stream. The project also has served to prevent flooding on Reiner’s property.

The unusual alliance of a farmer and environmentalists clicked, and the participants looked for another project. They brought in the Tulalip Tribes for added perspective on salmon habitat.

The group realized that making use of cow manure could help farmers and fish. Clearing farms of animal waste would reduce pollutants running into streams and cut costs for farmers in complying with environmental regulations. This, in turn, could allow them to add to their herds.

Biogas was the way, the group agreed.

Qualco was formed. The group obtained, through donation by the state, a former dairy farm in the Tualco Valley run by the Monroe Correctional Complex. The group also received a federal loan for renewable energy and a grant from the state Department of Agriculture. The equipment cost more than $3 million.

The group nets about $300,000 a year, Reiner said. The money goes to bond payments, environmental projects and upgrades to the system.

“None goes into our pockets, not a dime,” he said.

The work at the plant is done by dairy farmers on a volunteer basis.

The biogas plant uses the waste from about 1,200 cows. About 900 of them are located at Andy Werkhoven’s dairy farm about a mile and a half away. That waste is mixed with water and sent to the Qualco site via pipeline. The other 300 cattle are located on site next to the plant. Their only job is to eat and put out fuel for the generator.

Qualco also accepts unsold foods and beverages from stores, blood from meat processors and restaurant grease and uses it all in the mix. Qualco collects fees from companies to take the waste.

These materials are dumped into a concrete pit 15 feet deep and about 25 feet across, into which the liquid manure is piped.

An agitator with propeller blades churns the material into a swirling, roiling mix.

It’s then piped into a 1.4 million-gallon underground tank — 16 feet deep, 180 feet long and 74 feet wide — where it bubbles and gives off methane gas.

That gas is piped into a generator in a neighboring building, creating the power. The electricity is sent to the grid through three transformers mounted on a pole outside the building. The PUD is planning to replace those transformers with larger ones, Reiner said.

Previously, the energy went into the PUD’s system and the utility sent an equivalent amount to Puget Sound Energy. Now the power will stay home.

Effluent and solids from the process are applied to several farms as fertilizer.

Qualco’s original agreement with the state requires the fuel mix to be at least 50 percent cow manure and no more than 30 percent food-and-beverage waste. Qualco uses cow manure for the remaining 20 percent, creating a 70-30 ratio.

The sugars in the food waste, however, generate methane gas at a much higher rate than the cow waste, Qualco members said. As a result, the plant produces more gas than it can convert into electricity, and burns it off through an exhaust system.

While the generator creates enough power for about 300 homes, the plant produces enough gas for 800 homes, according to the Qualco website.

The plant would need another generator, or some type of expanded system, to take advantage of the remaining gas.

Qualco members plan to expand the plant, Reiner said. Options include steam power generation and compressing the fuel for use in cars.

“There are many directions we could go, and all of them are good,” he said.

Reiner believes the potential of biofuel is unlimited. Much more food waste and cow manure is available than is being used, he said.

Qualco could burn more food waste if it had the capacity and its agreement with state allowed it to do so, Reiner said.

He said any organic material that’s combustible could be turned into fuel. 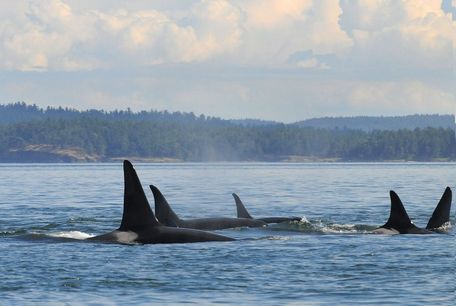 Forty years after the passage of the federal Endangered Species Act, the state and Snohomish County remain squarely on the edge of that preservation frontier.

More than 40 animal species in Washington are listed by the federal government as either endangered or threatened under the law, signed by President Richard Nixon on Dec. 28, 1973. Many others are listed as species of concern.

Among creatures found in waters in and around Snohomish and Island counties, seven species of fish or marine mammals are listed under the act.

Nationwide, 645 species of animals and 872 plants or trees native to the U.S. are listed as threatened or endangered, according to the U.S. Fish and Wildlife Service.

Of the local fish species and orcas, salmon and bull trout were listed in 1999, the killer whales in 2005 and the other fish species in 2010.

Reasons cited for the decline of the fish are many, including pollution, overfishing and loss of habitat. In the case of killer whales, dwindling supply of their diet staple — chinook salmon — is a major contributing factor, officials say.

Supporters claim many success stories for the Endangered Species Act, with bald eagles and peregrine falcons among the more prominent examples.

Gray whales were taken off the list in 1994 and steller sea lions just this year.

According to U.S. Fish and Wildlife, 99 percent of the hundreds of species listed since the Endangered Species Act became law have been prevented from going extinct.

The law protects species by preventing them from being harmed or captured and by regulating human activity in their habitat areas.

Perhaps the best feature of the Endangered Species Act, some say, is that it keeps the species’ problems in the public spotlight.

“It has pulled people together to talk about what to do,” said Daryl Williams, environmental liaison for the Tulalip Tribes.

Recovery for many species, however, is slow and not guaranteed.

“Listing is a way of sort of planning for recovery, if you will,” said Brent Norberg, a marine mammal biologist with the National Marine Fisheries Service in Seattle.

The southern resident orca population, for example, had 88 whales in 2004, the year before it was listed under the ESA. The population now is down to 80, according to the Orca Network, a Whidbey Island-based group that tracks the whales.

“Because they’re so long-lived and their recruitment is so slow and their numbers are so small, it’s going to be quite a lengthy process,” Norberg said.

William Ruckleshaus, the first director of the Environmental Protection Agency under Nixon in the early 1970s, is 81 and lives in Medina.

The EPA was created and Endangered Species Act was passed after pollution and declines in species had reached alarming levels, Ruckleshaus said. The Cuyahoga River in northeast Ohio, for example, famously caught fire in 1969.

“The public demanded something be done about it and the president responded,” he said.

He said the endangered species law might have overreached.

“We passed laws that promised levels of perfection that probably weren’t possible. It’s hard to do it, to be honest with you,” Ruckleshaus said. The law has been refined over time, he said.

Ruckleshaus works part-time for Madrona Venture Group, a venture capital firm, and has served on the boards of the Puget Sound Partnership Leadership Council and the Salmon Recovery Funding Board.

“The motivation behind the ESA couldn’t have been any higher — we want to preserve all living things on Earth. Who’s against that?” Ruckleshaus said.

“I think it’s been very positive overall,” he said. “It’s shown how what we believe to be innocent acts can have devastating effects on species.”

Among those stories is perhaps the most high-profile recovery: the national symbol, the bald eagle.

The eagle’s numbers in the 48 contiguous states declined from roughly 100,000 in the early 19th century to only 487 nesting pairs in 1963, according to the U.S. Fish and Wildlife website.

Several measures were taken to help the eagle, beginning with the 1940 Bald Eagle Protection Act, which made it illegal to kill an eagle. The pesticide DDT, found to have thinned the eggshells of eagles and other birds, was banned in 1972.

Still, “listing the species as endangered provided the springboard” for the U.S. Fish and Wildlife Service to accelerate recovery through captive breeding, law enforcement and nest-site protection, according to the agency’s website

Bald eagles rebounded and they now number about 10,000. The eagles were taken off the list in 2007.

The Endangered Species Act’s effect on salmon is not so clear, the Tulalips say.

Development that destroys habitat is not restricted enough to offset the losses, Williams said.

“We’re still losing habitat faster than we’re gaining it from restoration,” he said.

The problem is inconsistency in rules among various agencies involved in environmental protection, said Terry Williams, fisheries and natural resources commissioner for the tribes.

Also, because of the ESA, some habitat restoration projects have to jump through the same hoops as other construction, causing delays in measures that could help fish, Daryl Williams said.

“I kind of have mixed feelings about it,” he said.

Those restrictions may be a necessary evil, said Norberg, of the fisheries service.

For example, if creosote-soaked logs are being removed from a waterway, if it’s not done properly, it could result in creosote finding its way back into the water, “so it does as much harm as it does good,” he said.

Restrictions also can affect landowners’ use of their property. This not only angers some property owners but can defeat the intent of the law, said Todd Myers, environmental director for the Washington Policy Center, a right-leaning think tank in Seattle.

Because the law governs use of land where a listed species is found, some landowners take steps to eliminate habitat for a species on their property so it won’t be seen there, Myers said.

“You get a regulatory stick that puts landowners at odds with habitat recovery,” he said.

A better way, he said, is to reimburse landowners for measures taken to preserve or promote habitat, he said.

“That at least takes a step toward making a landowner a partner as opposed to an opponent.”

Despite the ESA’s flaws, “it is working well in terms of bringing all the various parties together to talk and to plan accordingly,” Norberg said.

The decline of the salmon might not be reversed without it, Ruckelshaus said.

“It is an extraordinarily complex problem,” he said. “But for the ESA I doubt we would have paid the attention to it we have, and I think that is absolutely necessary for it to recover.”