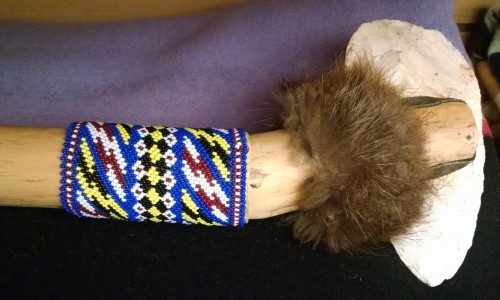 TULALIP – Tulalip tribal artists, Richard “2 Doggs” Muir and David Fryberg, have begun work on a healing project for the families and students affected by the October 24 shooting at Marysville-Pilchuck High School. The healing project will consist of a large beaded staff and a brass plaque that will serve as a memorial to the only survivor and four students who were shot and killed.

“The purpose of this is for family, friends, staff and teachers to come by and remember these kids in a good way. The families can bring something and hang it off the staff if they want to. The school can make something to hang off the staff. It just symbolizes that these kids’ innocence was taken,” said Muir.

Muir, who is known for his bead work with the Native American peyote stitch, and Fryberg, who is known for his work in cedar weaving and hand drums, are reaching out to the victims’ families for input on the project’s design. Muir will be donating the beadwork that will feature a simple peyote stitch using beads to wrap around a large staff that will also feature an eagle claw atop the staff. Fryberg will be crafting the bronze plaque that will have a short healing message engraved on it.

“I want to talk to the families to ask them how do they want their kids represented in this. What would they want to see on this staff to represent their child. I would like to feature the kids’ names, either their first names or their full names, because this project is for them. It is a

The idea for the project is loosely taken from the tradition of a journey stick or memory stick. Many Native 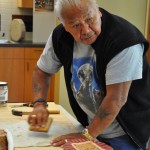 American tribes used staffs or large sticks as a way to memorialize a person or place.  The staff is left in place and travelers are encouraged to leave a memento of personal value or representation as a memorial. The staff is from a pine tree, which symbolizes peace to many Native American tribes. The beadwork, which will feature over a 1,000 beads, will take nearly seven months to complete. Muir states the staff will be completed near the one-year anniversary date of the shooting.

“It is going to take me awhile to complete. I am going to have to set it down and set it aside because of the emotional transfer that comes with this type of work,” explains Muir about the traditional cultural practice in not crafting or completing tasks with negative thoughts. “My mind has to be in the right spot and clear of negative thoughts.”

“I want this to be for anybody who wants to take a moment to remember these kids, because who knows what these kids would have accomplished if they hadn’t been tragically murdered. They could have been the ones who invented renewable energy or saved our natural resources. We will never know now,” said Muir.

The beaded staff and bronze plaque, once complete, will be gifted to the Marysville-Pilchuck High School. Staff will then decide where the items will be placed for students and visitors to access.