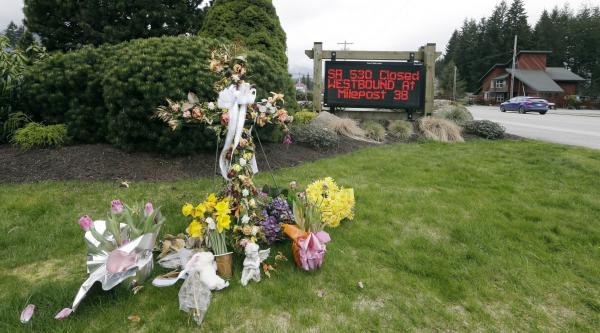 A road sign advising the closure of Highway 530 stands near a small display of flowers and a cross Tuesday, April 15, 2014, in Darrington, Wash.
Elaine Thomopson AP Photo

The death toll from the mudslide that hit the Washington town of Oso has risen to 39.

The sheriff’s office still lists seven people as missing from the March 22 landslide that buried dozens of homes in the community about 55 miles northeast of Seattle.

Recovery workers with dogs are probing the debris, and the state Transportation Department is making plans to clear a mile-long stretch of Highway 530 that is covered with mud and trees up to 25 feet deep. 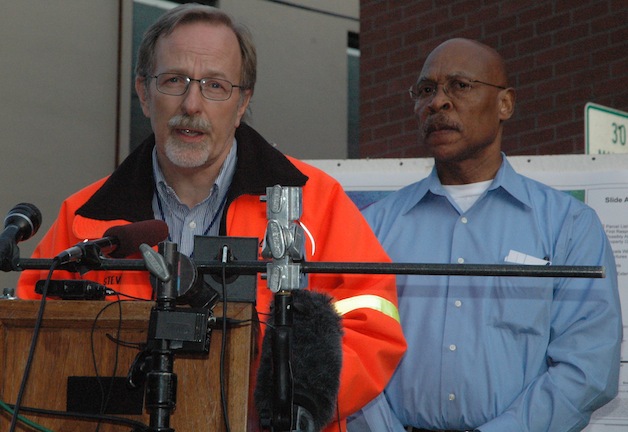 ARLINGTON — Snohomish County Executive John Lovick described Monday, March 24, as “a day of progress and sadness,” as six more were confirmed dead as a result of the Oso landslide on Saturday, March 22, bringing the disaster’s total death toll to 14, and reports of missing and unaccounted for persons in the area escalated from 108 at the start of the day to 176 by the time county officials conducted their third and final press conference of the day, outside of the Arlington Police Station.

Snohomish County Fire District 21 Chief Travis Hots reiterated that firefighters and law enforcement personnel have been joined in their efforts by search and rescue crews, search dogs and heavy equipment from the state Department of Transportation, the latter to move mud out of the way, and he added some words of appreciation to locally based responders, who have provided insights on whether certain homes were likely to have been occupied at the time of the landslide.

“Crews up there are up against enormous challenges,” Hots said. “The debris fields are like big berms of clay and quicksand. One of the folks out there told me, ‘You know, Chief, sometimes it takes five minutes to walk 40-50 feet and get our equipment over these berms.'”

Hots noted that the challenges of working in, much less walking across, such debris have been further complicated by the presence of septic tank materials, as well as gasoline, oil, propane and other contaminants.

“It’s very tedious and slow-going,” said Hots, who relayed another responder’s experiences with “void spaces,” such as houses, out in the field. “He said it’s very tough to even search those buildings, because they’ve been collapsed and compressed with all that material that’s come down. He best described it as like cement, that’s gone into those void spaces, and it’s very, very difficult to get in there and actually search. One of them even told me, ‘You know, Chief, I sat there for an hour, moving material, and only moved maybe about four buckets of material in about an hour.'”

Hots was disappointed to report that crews found neither any survivors nor any signs of survivors during the day, and Snohomish County Department of Emergency Management Director John Pennington likewise acknowledged how discouraging it must sound to hear that the number of reported missing and unaccounted for had increased by so many in a single day, but Pennington emphasized yet again that those consolidated lists of reports are not entirely synchronized yet, and could include duplicates.

Pennington described the crews’ “strongly enhanced and coordinated response” as improved over their previous two days, and extended his thanks to Gov. Jay Inslee and President Barack Obama for declaring this situation an emergency on the state and federal levels, thereby facilitating assistance from the Federal Emergency Management Agency.

“They’ve dispatched us a mobile command vehicle from the Mobile Emergency Response System, otherwise known as MERS,” Pennington said. “That’s going to be dispatched out to Darrington to help them establish communications. At the same time, I’m happy to announce that we’ve established an Emergency Operations Center in Darrington, in conjunction with the town of Darrington and the Department of Emergency Management.”

According to Pennington, the federal government is finalizing the details to send a Type 1 federal search and rescue team, in addition to the Incident Management Assistance Team that’s already arrived from FEMA.

“Today, we were able to secure National Guard assistance, in the form of a 50-person search and extraction team,” Pennington said on March 24. “That team is en route here, and they will assist with our search and rescue efforts as well, with very technical expertise that we believe will be very effective in the days to come. The Northwest Incident Management Team — the local regional team from the Pacific Northwest and the northwest part of Washington state — remains on scene and continues to manage this incident, and for that, we’re eternally grateful.”

Pennington not only repeated his request, that members of the public report the names of missing or unaccounted for people to the Department of Emergency Management Call Center at 425-388-5088 if they have not done so already, but he also asked that they send in photos of those who may be missing or unaccounted for, via email at DEMCallCenter@snoco.org, and include the individuals’ first and last names, as well their distinguishing marks or features.

“There is an awful lot of grieving out there in this community,” Pennington said. “There is an awful lot of unknown. That is completely expected. No information at the Call Center can be given out, and what we’d ask of the media and the public is, especially with shelter operations, and those individuals that are in these very tight-knit, very small communities where neighbors know neighbors, and families know each other very, very well and help out, that we would respect the privacy of those individuals as they begin the extensive grieving process.”

Although Pennington acknowledged that it is increasingly unlikely that any survivors will be found at this point, he nonetheless expects crews to proceed as though they’re conducting rescue rather than recovery operations, until such time as they feel the need to stop.

Snohomish County Public Works Director Steve Thompson clarified that certain crews had been pulled out of the area between approximately noon to 1 p.m. and 2:30-3 p.m., due to concerns that the landslide might still be moving, but assessments by three geologists on site determined that there was no additional risk.

“It just turned out to be some sloughing off the edge of the slide,” Thompson said. “Some trees were falling, but nothing deep, nothing to worry about, so we gave a green light to let the rescue commence.”

“Currently, the search effort is directed where there’s most likely to still be people that may need rescuing,” Hots said, before adding that pockets of vehicles, buildings and other structures are most likely to contain any remaining survivors. “There’s other areas of the scene where it’s not probable that there’s going to be anybody, areas where there were no houses. We’re checking the areas where the two neighborhoods were, and along the road on SR 530, both from the Darrington side and the Oso side.”

While the North Fork of the Stillaguamish River is currently flowing in an orderly fashion as it carves a new channel for itself on the north end of the Oso landslide blockage, the National Weather Service’s Flash Flood Watch remains in effect through Tuesday, March 25, due to the instability of the debris dam and the materials in it, as well as the unpredictability of how the new river channel will cut through it.