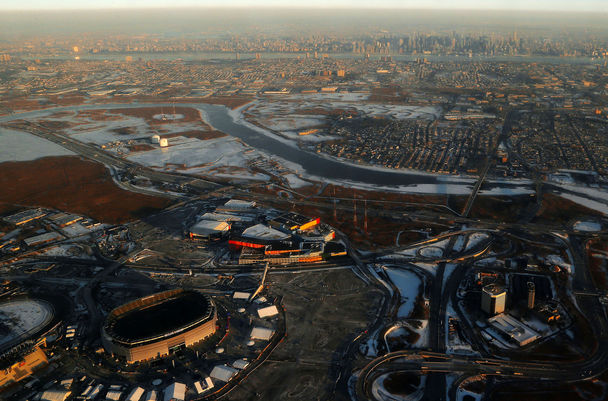 The Associated Press
This aerial photo shows MetLife Stadium, lower left, in East Rutherford, N.J., with the New York City skyline, top, not that far away in the background across cold marshlands.

The debate heats up over Sunday’s first cold-weather Super Bowl, but Weather Channel’s Sam Champion thinks the game is a cool idea.

By Geoff Baker, The Seattle Times

As a former longtime, upbeat weatherman for ABC’s Good Morning America — who became a managing editor at The Weather Channel in December — Champion makes his living off wind-chill factors, snow, ice and everything else some had anticipated for Sunday’s game. He’s giddy about the prospect of a championship played in wintry conditions and figures all the talk of chilly weather talk has been part of the NFL’s plan from the very beginning.

“I think this is exactly what the NFL wanted,’’ Champion says. “It’s going back to the basics of football — a game played in the elements. It’s a tough game and it’s played in tough conditions. And people want to see that.

“I think people want to go back to that tangible feel of what it’s like to have sports played out in the elements.’’

This is the first time a Super Bowl will be outdoors anywhere but California or the South. And the naysayers have shaken their heads ever since that decision was made, fearing the league is leaving its showpiece event open to an all-out blitz by Mother Nature.

Things are expected to be warmer Sunday, but Champion says the dire weather lead-up to the game — prompting speculation of possible postponements to Monday or Tuesday — has already accomplished what the league wanted.

“You’ve got that big buzz and big buildup to the game because people are worried about what the weather is going to be like,’’ he says.

In fact, the game conditions themselves shouldn’t be all that terrible for the players. Champion figures temperatures will be mainly in the low 30s — making it the coldest Super Bowl on record, though far warmer than the chilliest games in league history — with little chance of rain or snow.

But it won’t exactly be balmy.

Champion warns fans will have to layer clothing, especially since the stands at Met Life Stadium tend to get damp breezes blowing in from surrounding marshlands. He doesn’t expect wind to have an impact on the game itself, but says it could make it feel up to 10 degrees colder for fans in certain seating sections.

A Woodinville-based company, BDA Inc., is helping fans stay warm by producing 84,000 “warm welcome kits’’ to be placed on every stadium seat before the gates open. The company designed commemorative seat cushions the past five Super Bowls as part of a longstanding merchandising partnership with the league, but this year was asked to supply the kits — containing ear muffs, gloves, lip balm, three pairs of hand warmers, a winter hat and even a small radio.

“I think it’s the best thing we’ve ever done for the NFL,’’ says Seattle native and company CEO Jay Deutsch. “Everyone will want to take them home. These items are something that make nice collectibles.’’

Deutsch founded the company 30 years ago, partnering with the NFL to make Seahawks sweatshirts with “Alaska’s Team” on them. He and 20 Seattle-area employees are here this week, looking forward to cheering on their Seahawks no matter what the elements bring.

“There’s something romantic about being out there in the cold and the snow,’’ he says.

But not everybody takes a romantic view of players frolicking outdoors this time of year.

Former NFL tight end and coach Mike Ditka, working here for ESPN, played for the Chicago Bears when they won the 1963 NFL championship over the New York Giants in temperatures about 9 degrees. But Ditka says the now-TV-driven NFL is vastly different from a half-century ago and wonders why it would risk adverse weather.

“The World Series wouldn’t be played in inclement weather,’’ Ditka says. “People say ‘It’s cold and that’s the way football was meant to be.’ Well, yeah, it was meant to be that way. I played it that way 50 years ago. But now, it’s different. So, let’s make it right for the fans, the sponsors and the players.’’

Before the Super Bowl, home teams hosted NFL title games, and the coldest ever saw Green Bay beat Dallas 21-17 in 1967 at Lambeau Field, with kickoff temperature at minus-15. Shivering players huddled on the sidelines trying to stay warm, while referees resorted to yelling out calls after one had a whistle freeze to his lips.

The 1934 title game, played at this city’s Polo Grounds, saw the underdog New York Giants upset the undefeated Chicago Bears 30-13 on a slippery field frozen by an ice storm. New York trailed 13-3 in the second half, but switched to basketball sneakers for better traction and scored 27 unanswered fourth-quarter points.

A snowstorm during the 1948 championship in Philadelphia helped limit the scoring to a lone fourth-quarter touchdown as the Eagles defeated the Chicago Cardinals 7-0. Players had to help remove a snow-covered tarp pregame, delaying kickoff by 30 minutes. Officials were told to do their best at estimating first downs.

Hockey fans here got a taste Wednesday night of what a frigid sporting event feels like when the New York Rangers defeated the crosstown Islanders 2-1, outdoors at Yankee Stadium. The game began with a temperature of 15 degrees that fell into single digits with the wind chill.

Some of the 50,027 fans left during the first intermission, unable to stand the cold. But the majority stayed, including Eddie Natos, 20, shivering with pals Joe Santos, 18, and Dick Wallace, 18, in the left-field bleachers as wind gusts blasted them.

“You’ve just got to keep moving or you freeze,’’ Natos says, bouncing up and down on his feet. “But this has been a totally awesome experience.’’

Whether fans have the same reaction in Sunday’s first cold-weather Super Bowl remains to be seen.