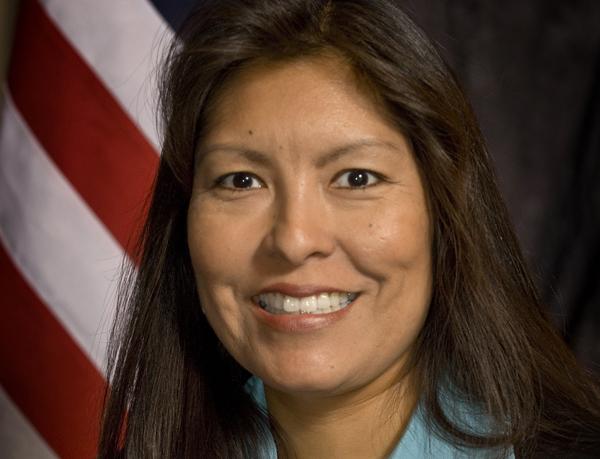 Hopi citizen Diane Humetewa smiled through a positive nomination hearing before the Senate Judiciary Committee on January 28 in her effort to be confirmed as a U.S. district judge in Arizona.

President Barack Obama nominated Humetewa to the position in 2013 after his administration previously forced her to step down from a U.S. attorney position in Arizona in 2009. At that time, the president chose Dennis Burke to take her position, but Burke resigned in August 2011 after admitting to leaking information about a federal agent. Humetewa went on to become a professor and lawyer at Arizona State University.

Many in Indian country were glad that Obama decided to give Humetewa a second look, this time to become the first female Native American to serve on the federal bench. She would be only the third Indian to do so in history if confirmed to the position by the full Senate.

Judging from support given to her by both Democratic and Republican senators at her nomination hearing, she will likely easily pass the committee, and then her nomination will proceed for consideration by the full Senate.

One of Humetewa’s main champions is Sen. John McCain (R-Arizona) who recommended her for both her previous U.S. attorney position and for the federal judgeship. The senator, whom she previously worked for when he led the Senate Committee on Indian Affairs, introduced her with supportive remarks at the confirmation hearing.

“It has been said that the Arizona bench ‘would be enriched by a member who reflects the community it serves.’ With that in mind, I am particularly excited about our third nominee, Diane J. Humetewa, also to the District of Arizona, in Phoenix,” McCain said. “Ms. Humetewa’s nomination is truly historic: Being a member of the Hopi Nation, if Ms. Humetewa is confirmed, she would be the first Native American woman to ever serve on the federal bench.

“Ms. Humetewa’s service to the Hopi Nation, which includes work as prosecutor and an appellate court judge to the tribe, runs deep and has remained a cornerstone of her career,” McCain added. “She is also a long-time advocate for victim’s rights, which can be traced back to her service as a victim advocate before she attended law school.”

McCain’s support for Humetewa serves as a stark contrast to his criticism of the president’s nomination of Cherokee citizen Keith Harper to become a U.S. representative to the United Nations Human Rights Council in Geneva. Harper’s nomination stalled in the Senate last December due partly to McCain’s concerns about Harper’s human rights record, but Harper was re-nominated earlier in January to the same position by the president.

Sen. Mazie Hirono (D-Hawaii), who chaired the hearing, said that she was impressed that McCain and committee member Sen. Jeff Flake (R-Arizona) worked in a bipartisan fashion with the White House to help fill several Arizona judicial vacancies.

Humetewa said at the hearing that she was very pleased to be joined by family members, friends and colleagues. She added that her parents were watching the hearing via webcam from back home on the Hopi reservation.

In response to a question from Hirono regarding how her past judicial work with the Hopi Tribe would help her in this position, Humetewa said that she learned to be objective and timely in her decision making during her time with that tribal court.

In response to a question from Flake on the implementation of pro-tribal elements of the Violence Against Women Act and the Tribal Law and Order Act, Humetewa noted that both laws are in their infancy, but she said she looks forward to working with tribes that take on the increased jurisdictional opportunities offered under those laws.

Also in response to a question from Flake, Humetewa noted that she helped prepare a 2007 report by the Native American Subcommittee of the U.S. Sentencing Commission that found disparities in the application of sentencing guidelines to Native Americans. Penalties were harsher for Indians who committed assaults in Indian country versus non-Indian who were sentenced in state courts for similar assaults, she testified. If sentencing guidelines are to be modified in the future, she said tribal consultation would be important to achieve.

Flake, impressed with Humetewa’s responses, said he was delighted by her “trailblazing way.”