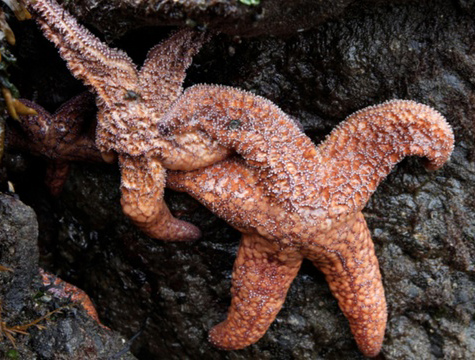 Steelhead out-migrating from North Sound rivers appear to have better marine survival than steelhead smolts from South Sound, and researchers are studying salmon poisoning disease as a potential cause.

Salmon poisoning disease, or Nanophyetus salmincola, is best known as the parasite that can make dogs sick when they eat raw salmon. It also has been found to affect the swimming performance of infected salmonids, potentially reducing their marine survival.

Fish pathologist Martin Chen is studying steelhead smolts for the NWIFC as part of the Salish Sea Marine Survival Project. Chen is sampling steelhead from the Tahuya, Skagit, Snohomish, Green and Nisqually rivers.

“We thought Skagit and Snohomish would be negative for the parasite based on historical records, and that was true,” Chen said. “We found lots of heavily infected fish in the Green and Nisqually rivers. I can see the parasite even as I’m dissecting them. Parasite numbers are as high as 18,000 per gram of kidney tissue.”

Both of those results were expected, but Chen was surprised not to find the parasite in any of the 24 steelhead sampled from the Tahuya River in Hood Canal. The Tahuya is across the canal from the Skokomish River, which has Nanophyetus in at least three tributaries.

South Sound fish also have their marine survival challenged by swimming through the Tacoma Narrows and Point Defiance, and facing more predation from seals. To make a more even comparison, researchers placed infected South Sound fish and uninfected North Sound fish in the same saltwater environment to compare survival. After 90 days in saltwater tanks at the USGS Marrowstone Island Laboratory, both groups had the same high survival rate.

“The fish from the Green River are still heavily infected,” Chen said. “It’s possible that infected fish have some disadvantage and they’re less able to escape predators. They don’t just hit the salt water and roll over and die.”

Chen also is testing drugs that could eliminate the parasite from infected fish. Two drugs are being tested on small numbers of coho at the Nisqually Tribe’s Clear Creek Hatchery, with some coho getting a 24-hour bath of each drug, and other fish having a drug mixed in their food. None of the fish from this initial test will be released or eaten.

“If the drugs were effective and you were rearing fish in a parasite-positive environment, you could clean up a group of fish before releasing them,” Chen said. “You would no longer have to compare survival of fish between two river systems, making our studies more valid. In addition, being able to eliminate Nanophyetus before release could have a practical application for Northwest hatcheries.”

In Port Townsend, 12 ochre stars have died, while the illness eliminated a species from the tanks in Port Angeles. Both centers pipe in ocean water for their tanks. Experts believe the disease is infectious and might be caused by bacteria or a virus.

Caretakers at the Olympic Peninsula’s marine science centers don’t intend to replace sea stars until they feel more confident they can keep them alive. They also want to avoid taking breeding adults that might be needed to replenish wild colonies.

It is well known that nicotine is a highly addictive substance, whether delivered in a conventional cigarette or an e-cigarette.  The use of sweet flavors is an old tobacco industry trick to entice and addict young children to tobacco products, and the entrance of the nation’s largest tobacco companies into this market clearly is having an impact.   Why does Big Tobacco care about e-cigarettes?  Tobacco use kills more than 400,000 people each year and thousands more successfully quit.  To maintain its consumer ranks and enormous profits, the tobacco industry needs to attract and addict thousands of children each day, as well as keep adults dependent.   Big Tobacco is happy to hook children with a gummy bear-flavored e-cigarette, a grape flavored cigar or a Marlboro, so long as they become addicted.  We share the CDC’s concern that children who begin by using e-cigarettes may be condemned to a lifelong addiction to nicotine and cigarettes.

In addition, the American Lung Association is very concerned about the potential safety and health consequences of electronic cigarettes, as well as claims that they can be used to help smokers quit.  With no government oversight of these products, there is no way for the public health and medical community or consumers to know what chemicals are contained in an e-cigarette or what the short and long term health implications might be.   That’s why the American Lung Association is calling on the FDA to propose meaningful regulation of these products to protect to the public health.

The FDA has not approved e-cigarettes as a safe or effective method to help smokers quit. When smokers are ready to quit, they should call 1-800-QUIT NOW or talk with their doctors about using one of the seven FDA-approved medications proven to be safe and effective in helping smokers quit.

According to recent estimates, there are 250 different e-cigarette brands for sale in the U.S. today. With that many brands, there is likely to be wide variation in the chemicals that each contain.  In initial lab tests conducted by the FDA in 2009, detectable levels of toxic cancer-causing chemicals were found — including an ingredient used in anti-freeze — in two leading brands of e-cigarettes and 18 various e-cigarette cartridges. That is why it is so urgent for FDA to begin its regulatory oversight of e-cigarettes, which must include ingredient disclosure by e-cigarette manufacturers to the FDA.

Also unknown is what the potential harm may be to people exposed to secondhand emissions from e-cigarettes. Two initial studies have found formaldehyde, benzene and tobacco-specific nitrosamines (a well-known carcinogen) coming from those secondhand emissions. While there is a great deal more to learn about these products, it is clear that there is much to be concerned about, especially in the absence of FDA oversight.

A cow grazing on the lush pasturelands of Cornwall in southwest England and a seal swimming in the ice cold waters of the Arctic might not appear to have much in common. The link between the two is tuberculosis, with a strain of the disease threatening cattle populations in Britain and elsewhere now showing up among seals in the high Arctic.

Dr Claire Heffernan, a trained vet and a specialist in global health and disease interaction between animals and humans, says that as the climate warms in Arctic regions, more and more diseases from Europe and elsewhere are spreading there, threatening both animal and human populations.

“In the past diseases might not have survived in the cold temperatures and the ice of the Arctic but as the region warms a new dynamic is introduced” Heffernan told Climate News Network.

“We need to fundamentally alter the way we look at disease in the context of climate change. We should recognize disease as a harbinger of a warming world.”

Dr Heffernan, a senior fellow at the Smith School for Enterprise and the Environment in Oxford and director of the livestock development group at the University of Reading says a wide variety of diseases have recently become evident among Arctic animal populations.

Such diseases could have been transmitted in a variety of ways, says Heffernan. The spread of Toxoplasma, for example, might be the result of people flushing cat faeces down toilets in the US and Europe which are then carried by tides to the Arctic. More people are visiting the region. Tourists defecating in the wilds might be the cause of the spread of Erysipelas.

“The Arctic is like a Heathrow airport in terms of bird, seal and other migration patterns so that’s another way disease is easily spread” says Heffernan.  “And the disease pathway is not all one way – they can also be transmitted from the Arctic to elsewhere in the world.

“The point is no one is really joining up the dots between climate change and the spread of disease. There’s a whole new disease transmission cycle appearing in the Arctic which we just don’t understand.”

Human disease levels in the Arctic are a continuing concern says Heffernan. Rates of TB among the Inuit of northern Canada are far higher than in the general population.

Major economic change and development now taking place in the Arctic means previously nomadic people are moving to towns in search jobs. Ice melt is also forcing more into settlements. With people living in close proximity to each other, disease tends to spread faster. Infant mortality in the Arctic, much of it due to diseases curable elsewhere in the world, is considerably higher than elsewhere.

“In 1930s there was a temperature spike in the Arctic which led to an outbreak of malaria” says Heffernan. “In subsequent years chloroquine was used to combat it. But what happens now, with temperatures rising and the prevalence of chloroquine resistant malaria?”

Early in the last century there were periodic outbreaks of anthrax in the Russian Arctic, resulting in the deaths of thousands of deer and cattle. Some Russian scientists and officials have warned that burial sites of those anthrax infected animals are now being exposed.

“As the Arctic melts, ancient pathogens can suddenly escape” says Heffernan. “No one knows for certain how many livestock burial sites there are in the Russian Arctic – I’ve seen estimates ranging from 400 to 13,000.”

In recent years there have been several anthrax outbreaks affecting both cattle and people reported in the region, particularly among communities of the indigenous Yakut, who often live near to such burial sites.

With Arctic temperatures rising at more than twice the rate of the rest of the world, Heffernan says there’s an urgent need to link disease and climate change and tackle health issues.

But there are a number of problems preventing concerted action: the Arctic is governed by different states with different laws. There’s not even a common agreement among Arctic nation states on the region’s boundaries. There’s a dearth of trained medical staff and research across the region. When it comes to statistics, the Arctic is something of a black hole with health data subsumed into more general country wide statistics.

“There’s very little biosecurity work going on in the Arctic” says Heffernan. “Yet we have the means to control so many of these diseases. There must be urgent, concerted, joined up action.”