Labateyah Youth Home, operated by the United Indians of All Tribes Foundation, received a donation of 25 sets of lightly used dormitory furniture from Seattle Pacific University in Seattle, Washington.

“We hold our hands up in gratitude to Seattle Pacific University,” foundation chairman Jeff Smith, Makah, said in a press release. “SPU’s donation came at just the right time. Our old furniture was just not serviceable and we were despairing of finding replacements.” He said Seattle Pacific University’s gift will help Labateyah to continue providing essential services to the region’s homeless youth.

Labateyah Youth Home Manager Jenna Gearhart added, “Labateyah Youth Home is currently under-funded and we were very concerned about how we could replace our unusable furniture. Seattle Pacific University’s gift is wonderful. You should see the residents’ smiles.”

Labateyah means “transformer” in the Lushootseed language. Labateyah Youth Home was founded in 1992 by Native activist Bernie Whitebear, and provides a nurturing dormitory-style home for people ages 18 to 23. Residents can stay for up to 18 months and are provided with access to medical care, assistance with school placement, life skills training, and career counseling. Coaches work with residents to develop personal plans for self-sufficiency.

According to the foundation, Labateyah Youth Home has served more than 1,900 residents, of which 1,200 have gone on to permanent housing, since it was founded.

The youth home is located in a three-story building built in 1930; it was originally Crown Hill Hospital and is considered a local landmark by the neighborhood association. Friends of Labateyah, a group of professionals and community members, was formed to assist the United Indians of All Tribes Foundation in determining potential land, building and zoning improvements for the youth home site.

Jacoby Ellsbury’s name will go down in history. Not as the greatest Native baseball player to ever play the game, (and perhaps it will) but in a more personal way.

The Yankee’s center fielder donated copy million to his alma mater. According to an Oregon State press release, Ellsbury, who is Navajo and Colorado River Indian tribes, made the donation to expand the baseball team’s locker room facilities.

“OSU Baseball has given me so much,” Ellsbury told OregonLive.com. “I am thrilled I am able to help my alma mater carry on its proud tradition; and perhaps, this expansion will convince a few more Pacific Northwest recruits to wear OSU orange and black.”

OSU also plans to name its locker room facilities after the former Beaver.

Goss Stadium is in need of a few updates, including its overall infrastructure. The project is expected to cost $2.8 million and the enhancements are for the locker room, equipment room, a team meeting space and a new recruiting area. Ellsbury’s contribution accounts for 1/3 of the cost, SBNation.com says.

“We are tremendously thankful,” coach Pat Casey said in the release. “Great facilities are at the core of great programs, and with Jacoby’s generous gift we will be able to continue to offer our student-athletes a world-class experience.”

“Oregon State is where I got my start,” Ellsbury said. “It’s where I learned — from Coach Casey, teammates, and assistant coaches — how to be a successful athlete, a successful person. For that, I am forever grateful.” 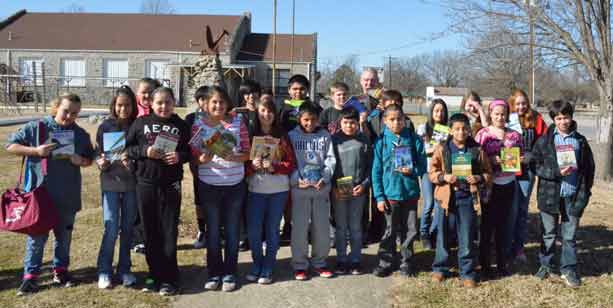 Oaks Mission sixth-graders stand with teacher Jerry Jackson outside the school with some of the books donated by East Brainerd Intermediate School in Chattanooga, Tenn.

TAHLEQUAH, Okla. — Four elementary schools within the Cherokee Nation’s jurisdiction received more than 1,000 books earlier this month from Chattanooga, Tenn. fourth graders, who held a book drive after learning about the tribe’s history and removal on the Trail of Tears.

The East Brainerd Intermediate School students formed a project to honor about 16,000 Cherokees who 176 years ago made the 1,000-mile journey from the ancestral homeland to present-day Oklahoma. With help from their teacher, the students organized a school-wide book drive and then shipped 96 boxes of books to schools in the Cherokee Nation.

“I was touched that a group of young children would put together such a heartfelt service learning project,” said Shelley Butler-Allen, who manages the tribe’s Johnson O’Malley program and coordinated with East Brainerd school. “The generosity by the students in Chattanooga is truly admirable. Hundreds of students here in the Cherokee Nation will benefit from their good deed.”

A private shipping company in Chattanooga volunteered to deliver the books to Belfonte School in Sequoyah County, Bell School in Adair County, and Kenwood and Oaks Mission schools in Delaware County. The four schools have a high percentage of Native American students.

“They’re really polite to think of us and send us good books to read,” said Oaks sixth-grader Christian Sequichie.

Sequichie picked out a donated James Patterson novel to read since he had read two others in the series.

The schools are sorting through the books, which will then be used for classroom reading.

“It’s nice to see them get excited about paperbacks when we’re moving into a digital world,” Oaks Mission Counselor and Principal Barbara Tucker said. “The students will really enjoy these.”

ARLINGTON — An unexpected Christmas present arrived early this year to three local food banks: $100,000 in cash, a donation from The Stillaguamish Tribe of Indians.

Sue Keezer, board chair of the Arlington Community Food Bank, said the charity had put in a request for a $25,000 grant this year from the tribe. The tribe has always been a strong supporter of the food bank, she said, and this has been a tough year both in a reduced amount of donations and an increase in need.

She went to pick up the gaily wrapped check Saturday morning. When she took off the wrapping, however, she was shocked.

Eric White, vice chairman of the Stillaguamish Tribal Council, said the tribe broke with its usual giving pattern this year to present an early gift to the three food banks, which included the Stanwood/Camano Island Food Bank and Northwest Harvest.

White said the tribe was motivated not just by general holiday spirit but also from hearing about a lot of people in need. While the tribe has supported the Arlington food bank in the past, they reached out to the other charities as well to help more people with their $300,000 gift.

“In our community, we have a lot of tribal members that live in Stanwood, so we reached out to Stanwood,” White said.

“When we get $5,000, that’s big news,” Bentley said. “One hundred thousand dollars is almost beyond comprehension.”

The Stillaguamish Tribe typically receives applications for charitable donations through the end of December, with donations given out in January. A second round of donations goes out in July. The tribe donated approximately $3 million to various charities in 2012, White said.

“Without their donations last year and this year we wouldn’t have had enough turkeys for our Thanksgiving baskets,” she said.

“This community has never let down this food bank,” she said.

Keezer said some of the money will help get through the holiday season and complete construction of a new permanent facility at 19118 63rd Ave. NE. The food bank is renting space owned by the Arlington airport.

By Shirley Skeel, The Suburban Times

TACOMA – University of Puget Sound is pleased to announce a $25,000 gift from the Muckleshoot Indian Tribe that will help provide scholarships for Native American students pursuing their education at the national liberal arts college.

This is the first grant to Puget Sound by the Muckleshoot Indian Tribe, which shares the college’s ambition to provide young people with broad access to a quality education that serves as a foundation for a successful career. The $25,000 gift will be allocated in scholarships to eligible Native American students attending Puget Sound.

“Young Native Americans in Washington have bold aspirations, but not always the family resources to ensure they can follow the paths they choose,” said Virginia Cross, chair of the Muckleshoot Indian Tribe. “We hope to encourage more of them to commit to a high-standard college education so they can enter civic and business life in positions that will be a boon to their community and serve as a model for other young people.”

Puget Sound has attracted a rising percentage of students from diverse backgrounds for the past two decades. More than 20 percent of freshmen students in 2012 identified as being from groups traditionally underrepresented in higher education. In the 2012–13 school year, 55 Native American students attended Puget Sound.

To ensure that students can devote themselves to their studies, as well as take advantage of opportunities to participate in campus clubs, community work, and athletic and academic activities, Puget Sound currently offers financial aid to 94 percent of its students. Providing financial support for students is also a key target of the college’s current One [of a Kind] comprehensive campaign.

The Muckleshoot Indian Tribe places priority in awarding grants to organizations that address the unique local and regional issues faced by Native Americans. Awards range across areas including education, health, culture, arts, the environment, community advocacy, and communities of color.