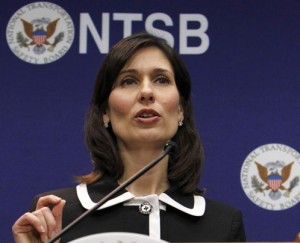 Ann Heisenfelt/AP – NTSB Chairwoman Deborah Hersman at a news conference in Washington in February. Federal officials were weighing a recommendation that states reduce their threshold for drunken driving from the current .08 blood alcohol level to .05

By Ashley Halsey III,
The Washington Post
Published: May 14

States may consider lowering the standard for drunken driving to the level of a single dry martini after a recommendation Tuesday from the National Transportation Safety Board.

The NTSB (National Transportation and Safety Board) wants state legislatures to drop the measure from the current blood-alcohol level of .08 to .05, about that caused by a dry martini or two beers in a 160-pound person. The .08 standard could allow the same person to drive legally after two beers or a couple of margaritas, according to a University of Oklahoma calculator.

“The research clearly shows that drivers with a BAC above 0.05 are impaired and at a significantly greater risk of being involved in a crash where someone is killed or injured,” said NTSB Chairman Deborah A.P. Hersman. “Our goal is to get to zero deaths, because each alcohol-impaired death is preventable. They are crimes. They can and should be prevented. The tools exist. What is needed is the will.”

The NTSB has no authority to impose its recommendations, but it provides an influential voice in the setting of safety standards. The board’s proposal got an immediate positive response from an organization of state highway safety officials.

“NTSB’s action raises the visibility of drunk driving and we will consider their recommendations,” said Jonathan Adkins of the Governors Highway Safety Association, while underscoring that the group continues to support the .08 level.

Advocates for the beer and liquor industry reacted negatively to the recommendation.

“While obviously the NTSB doesn’t make policy, states take their recommendations very seriously,” said Sarah Longwell of the American Beverage Institute, which lobbies for the industry on the state and national levels.

She denounced the recommendation as “terrible.”

“Between .05 and .08 is not where fatalities are occurring. This is like, people are driving through an intersection at 90 miles an hour and so you drop the speed limit from 35 to 25; it doesn’t make any sense,” Longwell said. “This is something that is going to have a tremendously negative impact on the hospitality industry while not having a positive impact on road safety.”

Almost 10,000 people are killed — and 173,000 injured — each year in drunken driving crashes, the NTSB said. Although improvements in auto and highway safety, as well as effective crackdowns on drunken driving, have produced a decline in roadway fatalities in recent years, about 30 percent of all traffic deaths continue to be alcohol-related.

“Most Americans think that we’ve solved the problem of impaired driving, but in fact, it’s still a national epidemic,” Hersman said. “On average, every hour one person is killed and 20 more are injured.”

The Insurance Institute for Highway Safety, a insurance industry research group, confirmed Tuesday that the risk of impairment to driving can occur well before a drinker reaches the .08 level.

“We would expect some effect if states lowered the threshold to .05, but since no state has passed such a law, it hasn’t been evaluated here,” said Anne T. McCartt, the institute’s senior vice president for research. “One difficulty in the U.S. is enforcement. Impairment begins well before the classic signs of impairment may become evident to a police officer, like a driver weaving. Since testing for impairment follows arrest, not the other way around, enforcing such a law would be a hurdle.”

The NTSB said almost 440,000 people have died in accidents tied to drinking in the past three decades.

In findings released with its recommendations Tuesday, the NTSB said that alcohol levels as low as .01 have been found to impair driving skills, and that a level of .05 has been “associated with significantly increased risk of fatal crashes.”

The board said a .05 limit would significantly reduce crashes and deaths.

In a recommendation made last year, the NTSB asked states to require ignition interlocks for all drivers convicted of drunken driving.

Longwell said the recommendation of a .05 limit for all drivers had implications for another emerging technology. A prototype vehicle expected to undergo testing later this year will be equipped with passive devices that eventually could be standard features in all vehicles, to test how much a would-be driver has had to drink.

“Where are they going to set this technology?” Longwell said. “They’ve been saying it’s .08. Well, the question is, if you lower the legal limit, where do you set the technology in all cars?”