Story by the Fairfield Sun Times 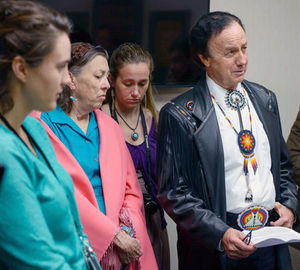 Washington, D.C. – Today the federal government returned the property it had seized from a Native American man exactly nine years ago: his eagle feathers. (see video)

Although just moments ago Mr. Robert Soto, a Lipan Apache religious leader and renowned feather dancer, received the tribe’s sacred feathers, the federal government has not repealed an arbitrary federal law forbidding Mr. Soto and others like him from possessing eagle feathers, and it is still threatening Mr. Soto with punishment for practicing his faith. The Becket Fund continues to defend Mr. Soto in court, and today it will be filing a motion to obtain protection from this unjust law.

“The government has about a million better things to do with taxpayer money than send undercover agents to raid Native American powwows and confiscate their eagle feathers, ” said Luke Goodrich, Deputy General Counsel for the Becket Fund for Religious Liberty.

In 2006, the government sent undercover agents to a Native American religious ceremony called a powwow to confiscate eagle feathers, which play a central role in the Native American faith. The agent was enforcing federal laws that prohibit possession of eagle feathers without a permit. The laws grant permits to museums, scientists, zoos, farmers, and “other interests, ” such as large power companies. They also grant permits to Native Americans who are members of “federally recognized” tribes. But they don’t grant permits to Mr. Soto’s tribe–the Lipan Apache Tribe of Texas. Although the Lipan Apache are recognized by historians, sociologists, and the State of Texas, they are not recognized by the federal government.

Although the Government has returned Mr. Soto’s feathers, it persists in threatening Mr. Soto and his congregation with civil and criminal penalties if they use eagle feathers in their religious services.

“The government allows hundreds of eagles, if not thousands, to be killed every year for non-religious reasons. Yet it won’t allow these Native Americans to possess even a single feather. ” said Goodrich. “It’s time to let Native Americans practice their faith; we’re not living in the 1800s anymore. ”

The Becket Fund for Religious Liberty is co-counsel in the case, together with the international law firm of Baker Botts LLP, and the Civil Rights Legal Defense and Educational Fund.

(CN) – The Interior Department may be infringing on the religious freedom of Native Americans by limiting the right to possess eagle feathers to federally recognized tribes, the 5th Circuit ruled.
Understanding golden and bald eagles are essential for the religious practices of many American Indian tribes, Congress amended the Eagle Protection Act in 1962, adding an exception “for the religious practices of Indian tribes.”
Under the law, Native Americans could apply for a permit to take and possess eagles by attaching a certificate from the Bureau of Indian Affairs that verified them as Indian to their application.
Interior Secretary Bruce Babbitt narrowed the eligibility in 1999 to members of federally recognized Indian tribes.
The National Eagle Repository in Colorado takes in dead eagle parts and distributes them to qualified permit applicants, with whole bird orders taking more than three years to fill, and loose feather requests taking about six months to turn around, court records show.
At a 2006 powwow a U.S. Fish and Wildlife Service agent found Robert Soto in possession of eagle feathers.
Soto told the agent he was a member of the Lipan Apache Tribe, and after the officer determined the tribe is not federally recognized, he met with Soto, who voluntarily gave up his eagle feathers in return for the government dropping its criminal case against him.
As pastor of the McAllen Grace Brethren Church and the Native American New Life Center in McAllen, Texas, Soto uses eagle feathers for his ministry’s religious ceremonies.
Soto “has been a feather dancer for 34 years and has won many awards for his Indian dancing and artwork at various powwows throughout the nation,” according to his self-published biography.
After the Interior Department denied Soto’s petition for the return of his feathers, he and 15 other plaintiffs sued, claiming the feather confiscation violated religious freedoms established by the First Amendment.
U.S. District Judge Ricardo Hinojosa sided with the feds and Soto appealed to the 5th Circuit in New Orleans.
Writing for a three-judge panel of the appellate court, Judge Catharina Haynes found the government had not carried its burden of showing its regulations are the least restrictive means of protecting what it claims are its compelling interests: protecting eagles and fulfilling its responsibility to federally recognized tribes.
Noting that the 1962 Amendment to the Eagle Protection Act “did not define ‘Indian Tribes,'” Haynes wrote on Wednesday, “We cannot definitively conclude that Congress intended to protect only federally recognized tribe members’ religious rights in this section.”
She added: “The Department has failed to present evidence at the summary judgment phase that an individual like Soto-whose sincerity is not in question and is of American Indian descent-would somehow cause harm to the relationship between federal tribes and the government if he were allowed access to eagle feathers, especially given congressional findings that the exception was born out of a religious concern.”(Emphasis in original.)
The law also grants the Interior Secretary authority to OK the taking of eagles or eagle parts for public museums, scientific groups, zoos, wildlife and agricultural protection.
Haynes took issue with the fact that the government did not bring up these various nonreligious exceptions to the law.
The feds additionally argued that removing barriers to possession would lead to a spike in poaching to supply a black market in eagles and eagle feathers.
But Haynes dismissed that as “mere speculation” by the federal agents who testified in the case.
“This case involves eagle feathers, rather than carcasses. It is not necessary for an eagle to die in order to obtain its feathers. Thus, speculation about poaching for carcasses is irrelevant to Soto’s request for return of feathers,” the 25-page ruling states.
In coming down on the side of religious freedom, the panel relied heavily on the Supreme Court’s recent Hobby Lobby ruling, which found that requiring some corporations to supply contraceptives to their employees against their religious objections violates the Religious Freedom of Restoration Act.
The panel reversed and remanded the case to Hinojosa and urged the government to prove the permitting system does not violate the RFRA.
In a one-page concurring opinion Judge Edith Jones said the ruling should be read to only apply to American Indians.
“Broadening the universe of ‘believers’ who seek eagle feathers might … seriously endanger the religious practices of real Native Americans,” she wrote. 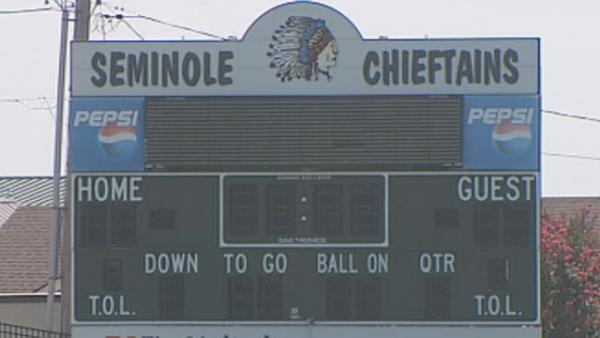 School officials in Seminole County, Oklahoma, told Native American seniors at Seminole High School that they are prohibited from wearing eagle feathers on their graduation caps for Thursday’s ceremony. The officials said that it would violate graduation guidelines.

But 25 Native seniors will walk across the stage on Thursday night, some vowing to wear the feathers anyway. “This is a way of expressing who we are,” Kaden Tiger told KFOR news. “I’m still going to wear it. I can’t take it off.  Can’t make me.”

Tiger was given the eagle feather for being an outstanding citizen of the Seminole Nation and has already tied it to his cap, along with tribal beads. “I wasn’t going to go by the rules anyway because it’s my right,” he said. “The accomplishment of completing high school is pretty big for me. That eagle feather represents what I’ve accomplished.”

According to PublicSchoolReview.com, at least half of the school’s enrollment is American Indian. And the fact that its mascot, the Chieftains, wears a headdress and eagle feathers seems contradictory to some.

Amari White (Seminole, Creek, Choctaw and Chickasaw), a parent of one of the graduates said, “It does confuse me, that you use the Chieftain mascot, but you can’t honor it with a feather when you have it painted on the wall… it confuses me.”

Despite this confusion, school officials said that none of the students are allowed to wear embellishments on their mortarboards. “While we applaud the many accolades our students have received in their activities outside the school environment, our graduation ceremony is designed specifically to honor achievements attained under the district’s purview,” said Jeff Pritchard, the school’s superintendent, in a statement on Wednesday.

NORTH PLATTE, Neb. (AP) — The carcasses of dead bald and golden eagles found in Nebraska are collected and recycled for religious purposes.

The North Platte Telegraph reports (http://bit.ly/1nwRtQ2 ) the state is part of an unusual federal recycling program that provides parts of eagle carcasses to Native Americans who hold valid permits.

The feathers and other body parts of eagles are considered sacred by some Native Americans. But federal laws designed to protect the birds make it illegal for most people to possess any part of a golden or bald eagle.

After years of dissatisfaction among tribal members over lengthy delays in receiving eagle feathers from the National Eagle Repository, change may be on the way, prodded by a federal government that’s often blamed for the sluggish pace of the existing process.

“What we’re trying to do is at the end of the day we know we’re not going to make everyone happy, and even some of those who are happier will only be marginally happier,” cautioned Pat Durham, national tribal liaison for the U.S. Fish and Wildlife Service (FWS), of the hoped-for faster operation. “But we’re doing the best we can.”

Members of federally recognized tribes can apply for eagle feathers, parts or whole birds from the FWS-operated Repository in metro Denver, but the wait time for a whole immature golden eagle is up to four years, in part because of its prized black-tipped, white tail feathers. The Repository receives bodies of eagles found nationwide.

Of the new proposed rules, major changes apply to American Indian prison inmates, who submit more than half of the applications for feathers, said Bernadette Atencio, Repository supervisor, who noted that changes in policy may “make more feathers available to non-incarcerated tribal members.”

The large number of inmate feather applications was a focal point for the new regulations, which would generally limit prisoners to one eagle order within their facility’s policy in order to halt constant re-orders. The FWS also plans to process feather replacement orders (not-reorders), generally received from prisoners with lengthy sentences with long-time use of the feathers.

Sometimes-darker motives behind eagle orders were cited by both Durham and Lenny Foster, Dine’, a longtime voluntary spiritual advisor for the federal Bureau of Prisons, the Arizona Department of Corrections, and other programs.

“Spiritual practices are important to Native prisoners for emotional and physical well-being,” Foster said, adding that eagle feathers can be a “necessary and vital part of ceremony” that should not be misused for barter, a practice sometimes involving non-Indians, in which eagle feathers have been traded for purchase of prison commissary items.

Another new Repository practice would require that a tribal official or traditional leader verify that a tribal member’s whole eagle application is for religious purposes. Durham found a similar, earlier requirement controversial and changed it 13 years ago when he became the top-level tribal liaison.

“Now, we’re just asking people to have the support of the tribe in getting the whole bird,” he said.

The new procedures were derived from official consultation with tribes over the last year. Durham also singled out Atencio for her work on the new rules and Special Agent in Charge Steve Oberholtzer, FWS Region 6, who traveled widely to listen to the views of tribal liaisons and others.

The new procedures are expected to go into effect in late summer or fall 2013 after a written-comment period for officially designated tribal representatives of federally recognized tribes ends August 31. The new practices will be monitored for one year to gauge their effectiveness.