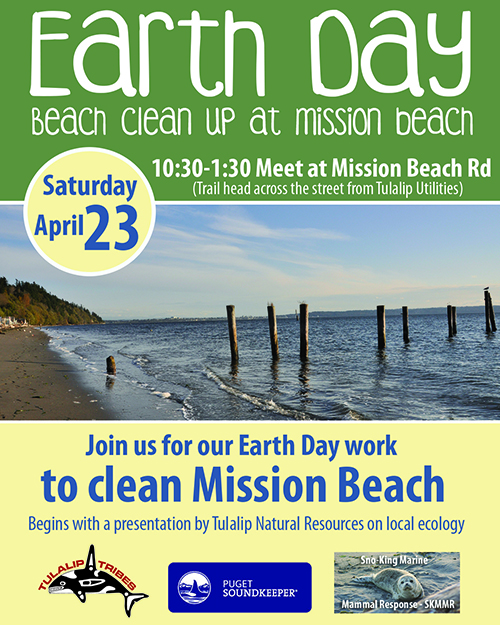 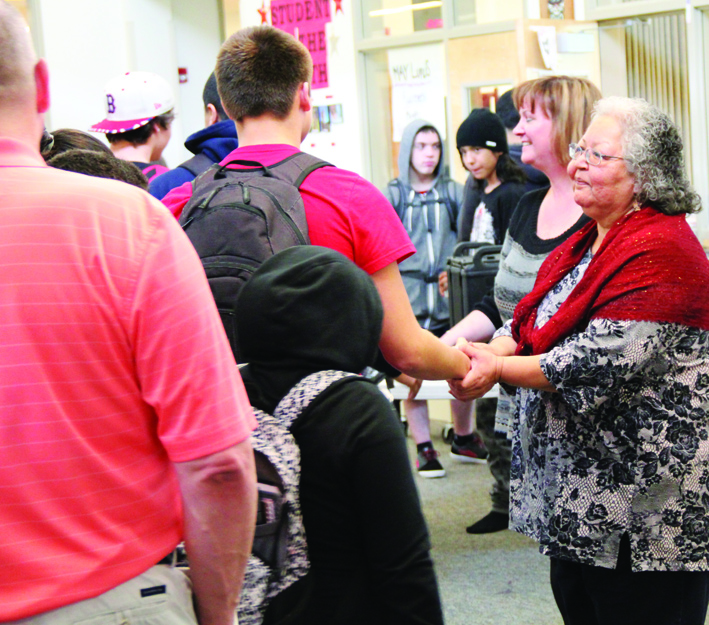 On Thursday, May 14, the students of Heritage High School received a special in-person recognition by Inez Bill, Rediscovery Coordinator, for their efforts in cleaning up the natural history preserve located behind the Hibulb Cultural Center on Earth Day. All the Heritage students assembled in the main hall of the high school, received a traditional refreshment (nettle tea), and were recognized by a deeply appreciative tribal elder.

“In doing what you did, you made a contribution to your own future. And so I wanted to acknowledge all those who came to Hibulb and invested in their future because I wasn’t there at the time and that’s the reason why I’m here today. Because I do need to acknowledge that because we can’t let something like that go by and not say thank you, take time and say thank you. I wanted to acknowledge that because you are important to your teachers and your teachers are important to you. That’s the way of our people. All of this is going to mean a lot to you later. I am a person who has had many teachers in my life and have teachers even today who continue to teach me. I am nothing without my teachers. I am nothing without having them people in my life. I appreciate the people who take the time; who teach me how to be a good person and live in a good way. Remember to honor your teachers because in our way of life we will have many teachers.

“Remember to take care of our environment. We’re at a critical time in our lives where our water is polluted, where there are a lot of things going on that are taking up the land, things are happening to our Mother Earth. It’s going to be up to you to help save our environment, to help save the purity of our water. Water is sacred. Everything that is living requires clean water, whether it’s salt water or fresh water, for the salmon and the fish and all Mother Earth.

“I just wanted to come here and share that with you today. Thank you. Try to be good stewards of the Earth 365 days of the year, like our ancestors were. Try to think about it and keep it in your prayers. Thank you.” 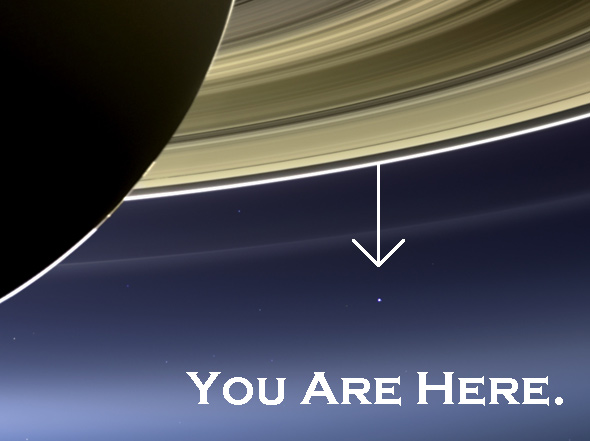 The Earth as seen from Saturn is a reminder: The Universe is big, and we are not. Happy Earth Day!
Photo by NASA/JPL-Caltech/SSI

Today is Earth Day, a worldwide celebration of our home planet. I know you’ll be hearing a lot of talk about the environment today, humanity’s global impact, and more … which is great, and I wholly support that conversation (obviously).

But as an astronomer and science dork, I do love me some fun factoids. So I gathered together/calculated a few to give you a better appreciation of our planet’s place in the Universe. You might want to check out the ones I posted last year, too. You can’t know too much about Earth.

1) Earth Day is April 22 every year. On average (jumping over leap years and such), between subsequent Earth Days our planet moves about 940 million kilometers (580 million miles), the circumference of its orbit around the Sun. That means it’s faster—way faster—than a speeding bullet: about 30 km/sec (18 miles/sec)! Typical rifle bullets travel 1-2 km/sec, so the Earth outpaces them handily.

3) The Earth is the biggest of the terrestrial (rocky, as opposed to Jupiter-like gas giant) planets in our solar system.

4) Venus, the closest planet in the solar system to Earth’s size, has a diameter of 12,104 km (7,504 miles), 95 percent the width of Earth. It has about 82 percent the mass of Earth, too, making it our twin. However, its thick atmosphere is mostly carbon dioxide, it rains sulfuric acid, the air pressure on its surface is 90 times Earth’s, and the average temperature is a lead-melting 460 C (860 F). So it’s more like our evil twin.

5) Nearly 2,000 confirmed exoplanets (worlds orbiting other stars) have been found so far. The smallest, Kepler-37b, is barely bigger than our own Moon! Another, KOI-314c, has the same mass as Earth but is so hot it’s puffy, with a huge atmosphere. The planet that has the best chance of being most like Earth is Kepler-186f, which has 1.1 times the Earth’s diameter and is the right distance from its star to have liquid water. We really don’t know what it’s like beyond that, though. It might be more like Venus, or Mars.

6) We’ve only just started looking for other planets, though. There may be billions of Earth-size planets in our galaxy alone.

7) Coming back home again, Earth has something no other planet we know of has: a lot of water on the surface. It’s about 71 percent water by area, dominated by the Pacific Ocean, which covers a staggering 155.6 million square km (60 million square miles) of the surface. That’s nearly a third of the planet. 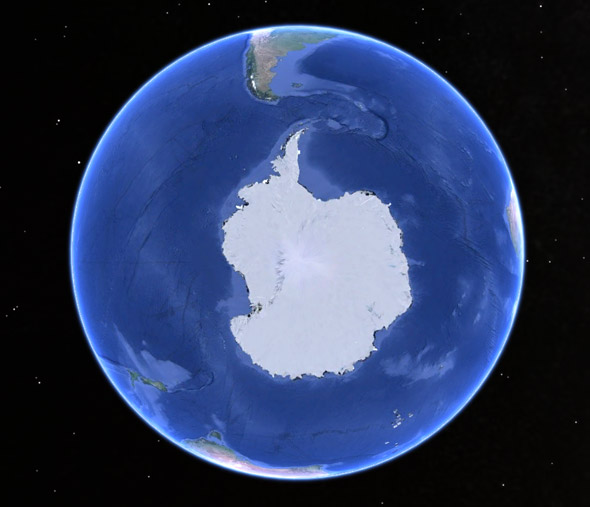 The vast majority of the Southern Hemisphere is water. This is more obvious when you look down from over the South Pole.
Photo by Google Earth

9) Water exists naturally in all three physical states on Earth’s surface: solid (ice), liquid, and gas (water vapor). Due to a peculiar property of water—called its triple point—it can even exist in all three states at the same location and time. So now when things go wrong, you can say, “Well it could be worse: It could be raining and snowing and steaming!”

10) The more we look, both in our neighborhood and in deep space, the more we find that our Earth is one-of-a-kind. Even if we do eventually spot those billions of other planets similar in size to Earth, it’s unlikely they will be just like ours, with our exact balance of chemistry, temperature, and life. Heck, in the distant past the Earth didn’t look like it does now, and it’s the same planet.

What this tells us is that what we have now is precious, unique, and vital to us and ours. We don’t have an emergency backup, a summer home, a spot we can retreat to. The Earth is all we’ve got. We need to treat it that way.

Phil Plait writes Slate’s Bad Astronomy blog and is an astronomer, public speaker, science evangelizer, and author of Death from the Skies! Follow him on Twitter 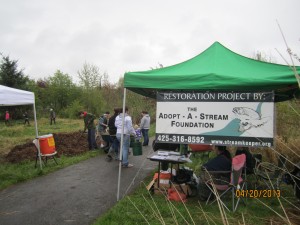 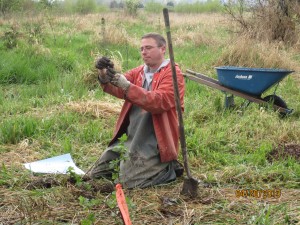 TULALIP, Wash. – Community members chose to celebrate Earth Day on April 20th, by helping plant native trees and shrubs in the Qwuloolt Estuary located on the South end of Marysville. The Adopt a Stream Foundation (AASF) is guiding this portion of the project by planting the native trees and shrubs which have been made possible by a grant from the Washington State Department of Ecology through a $250,000 Allen Creek Grant. The main focus of the grant is  to work with and  inform nearby homeowners that live near the Allen Creek watershed about the restoration project. Walter Rung, Ecologist from the AASF says “We are going to door to door and talking to them about ways to help improve water quality in the creeks.” 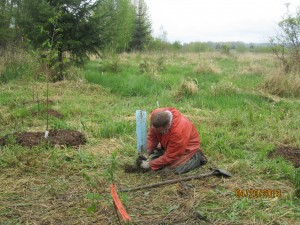 A plastic shield is placed around the tree in order to help it thrive and prevent it from being cut down when the invasive species are removed from the area.
Photo by Monica Brown 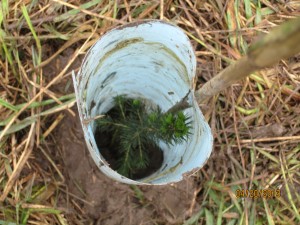 A peek iside that the freshly planted tree.
Photo by Monica Brown

The expected outcome of  the restoration project is to raise the population of salmon, and migratory birds that inhabit the Qwuloolt Estuary and it’s tributaries. Planting native vegetation is one way of helping to improve water quality. CK Eidem from the AASF informs, “Today we’re putting in about 100 potted stalk and 100 live stakes; potted stalk are potted plants and live stakes are a cutting from a tree which will grow into a shrub if planted at the right time of year,”

Other environmental changes are being made such as improving natural channel formation  and eventually removing the tide gate. The tide gate is located just south of the storm water Treatment Facility and should be taken down within a year.

“We’re expecting once they remove the tide gate that there will be a lot more salmon in the creek,” said Walter Rung.

At the estuary project, informational booths and speakers informed people about how to protect the estuary and streams in the area by simple methods of not using toxic chemicals in their yards for weed control, disposing of pet droppings properly and regular maintenance their septic systems. Staff from Tulalip Tribes Natural Resources Department explained the stages and reason of the restoration project and provided delicious samples of Sitka Spruce tea and Nettle Tea. 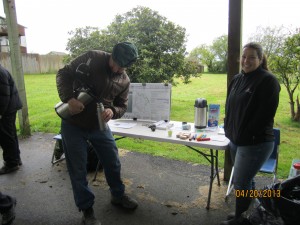 As many community members are already aware, the City and a multitude of enthusiastic, civic-minded volunteers are readying for our 2nd Annual Marysville Community Clean Sweep Week.

Clean Sweep is our weeklong blitz of free activities aimed at joining with neighborhoods, businesses and residents to get our collective spring cleaning off on the right foot, and hopefully inspire others along the way toward making Marysville a safer, attractive and more livable community.

Neighborhood Clean Sweeps, painting over graffiti, Adopt-a-Street litter control pickup, the Shred-a-Thon and PC recycling are just some of the free activities that will make for a busy week around Marysville’s streets and neighborhoods. 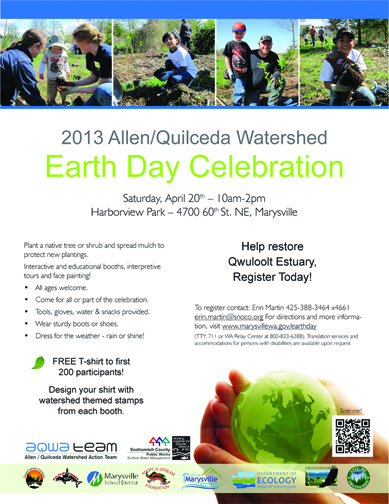 One free activity during Clean Sweep Week that can sometimes get overlooked is the annual Earth Day Celebration hosted and sponsored by the Allen/Quilceda Watershed (A/QWA) Team. That’s only because while most other activities are happening along busy streets or urban areas, the A/QWA Team’s popular native tree and shrub planting projects happen off the beaten path.

The Earth Day Celebration is an integral part of Clean Sweep Week, a testament to the importance we and all the Earth Day participating agencies place on preserving and protecting clean water and a healthy watershed. It’s no coincidence that it falls during Clean Sweep Week.

I invite you to come out and help at this year’s Earth Day Celebration, 10 a.m.-2 p.m. Saturday, April 20 at the Qwuloolt Estuary Restoration Project Site in Harborview Park, 4700 60th Ave. NE, in Marysville.

The A/QWA Team chose the location to raise awareness about the Qwuloolt Estuary Restoration Project, which is lead by the Tulalip Tribes and includes various federal, state and local governments and agencies.

The Qwuloolt Estuary Restoration Project is a critical restoration project that will restore tidal influence to nearly 400 acres at the mouth of Allen and Jones Creeks. The event will include educationally focused booths, interpretive trail walks, face painting and a service activity.

This year participants will plant a native tree or shrub along the edge of the Qwuloolt Estuary restoration project and spread mulch to nourish new plants and suppress weeds. This is a fun, healthy way to do something good for the environment – if you don’t mind getting a little grubby.

The A/QWA Team is a diverse community group working together to implement the Quilceda/Allen Watershed Management Plan and to improve the overall water quality of streams in the Allen/Quilceda Watershed. The A/QWA Team community partnership is just one of the many important coordinating groups that accomplish the City mission:

Don’t  miss this great opportunity to get of the house and give back to our natural environment by volunteering or simply celebrating.