A federal judge in Eastern Washington has ruled a cigarette maker on the Yakama Indian Reservation owes $58 million in unpaid taxes and penalties.

The privately owned tobacco company has tried — so far unsuccessfully — to assert a treaty right to trade tax free.

The U.S. Treasury Department went after King Mountain Tobacco Company for federal cigarette taxes unpaid since 2009. The cigarette factory is owned by a Yakama tribal member. The company’s lawyers and the tribal government insist the reservation-based business is not subject to federal or state taxes.

King Mountain attorney Randolph Barnhouse bases this position on a specific provision of the 1855 U.S. treaty with the Yakama Nation.

“They gave up 17,000 square miles of land and they gave up a lot of other things for the right to be left alone on the reservation and to bring their goods to market without regulation,” Barnhouse said. “There are only two treaties that I am aware of in the entire United States that have that ‘right to travel and trade’ provision in the treaty.”

“People sometimes don’t want to hear about the history and they say, ‘Well, history; that was a long time ago,'” Barnhouse added. “Treaties are important and the promises that we made as a nation are important. They are especially important to the people who are living it every day, the Yakama people.”

U.S. government attorneys argue that the tribal cigarette company’s interpretation of the treaty is overly broad. “If no express exemptive language can be found in the text, the analysis is over. The claim of exemption fails. That is the case here,” wrote Justice Department attorney Carl Hankla in one of his briefs.

Federal district court judge Rosanna Peterson agreed. Attorney Barnhouse said his next step will be to ask Judge Peterson to reconsider at least one aspect of her ruling. The cigarette maker could later appeal. In fact, two other cases pertaining to the company are already before the U.S. Ninth Circuit Court of Appeals.

Back story straight from Hollywood?

An FBI affidavit made public in connection with the federal tax case reads like a Hollywood movie, complete with a confidential informant, wire taps, undercover agents posing as wealthy wholesalers, a chartered aircraft for added impact and the presentation of a briefcase full of bundled $100 bills.

The affidavit even includes what would be a requisite scene in a thriller in which the informant is suspected of being a cop and is challenged by the purported bad guys. According to the FBI transcript, King Mountain Tobacco owner Delbert Wheeler addressed the informant and said it did not matter if the man were a cop “because if you are and you mess with me, I will rip out your eyeball, then I will kill you. You understand you may shoot me but it doesn’t matter because in the end we will both go to the same place.”

The affidavit also places current Yakama Nation Tribal Council chairman JoDe Goudy at the meeting where, according to the government, extensive discussion of contraband cigarette trafficking and false reporting of sales happened. Goudy was identified as King Mountain’s sales manager at the time.

Barnhouse said the government’s treatment of his client “angers” him because he believes the U.S. is trying to put “these people out of business.”

Cigarette factories on the rez

King Mountain Tobacco is one of two cigarette manufacturing operations on tribal land in the Pacific Northwest. The other is Skookum Creek Tobacco Company, operated by the Squaxin Island Tribe near Shelton, Washington. The Squaxin Island enterprise has managed to avoid litigation.

One reason for that is because, unlike the Yakama Nation, the Squaxin Island Tribe reached a cigarette tax agreement with the State of Washington. Both cigarette factories import blended tobacco from the southeastern U.S. to process into their cigarettes. King Mountain has also harvested some tobacco from fields planted near its Yakima Valley manufacturing facility.

If the Yakama Nation were to succeed in winning tax-free status for its tobacco sales, it could gain a significant price advantage. The federal excise tax stands at just over $10 per carton of cigarettes. State escrow fund deposits impose a further $5.60 per carton expense.

A state of emergency has been declared in 20 Eastern Washington counties as new and existing wildfires threaten several hundred homes, as well as businesses, infrastructure and natural resources.

The declaration allows officials to get help from the Washington National Guard and the State Guard if needed. It also directs state agencies to help local governments in responding to wildfires.

As of early Wednesday morning, a 40 percent perimeter was contained at the state’s largest wildfire, Mills Canyon, near Entiat. The fire is holding steady at about 35 square miles.

Conditions could be an issue for firefighters Wednesday, according to meteorologists. Highs in the 100s are anticipated. Added to windy conditions, that could challenge firefighters and homeowners.

State officials are worried extreme fire weather conditions and the lack of firefighting resources in the Northwest could hamper future firefighting efforts in the state.

Six other fires were sparked Tuesday. New wildfires, some started by lightning, are keeping crews busy in central Washington. A brush fire temporarily closed a 20-mile stretch of Interstate 90 Tuesday night in the central part of the state.

The Washington Department of Natural Resources has put a burn ban in place for all state lands that is projected to last until September 30.

They have completed a line around the fire that burned about 35 square miles around Satus Pass, about 15 miles northeast of Goldendale. Spokesman Dam Omdal says more than 1,300 firefighters are mopping up hot spots and strengthening the lines. Evacuations have been lifted. Highway 97 remains closed between Goldendale and Toppenish.

At the 93-square mile fire south of Wenatchee, spokeswoman Linden Lampman says fire retardant drops Tuesday and about 80 hot shot firefighters working overnight prevented the fire from spreading south into Kittitas County where some residents have been evacuated. Nearly 400 firefighters are on the scene. 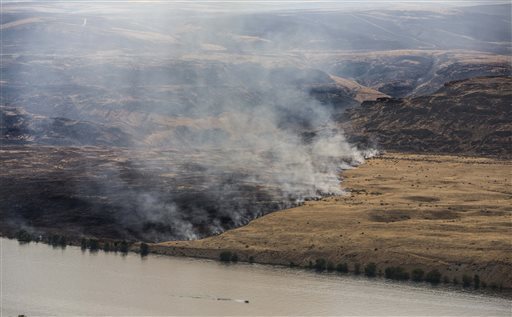 This Monday, July 29, 2013 photo shows the Colockum Pass fire burning in the mountains which has also burned its way down to the banks of the Columbia River. The Colockum Pass fire has grown to more than 10 square miles burning 5 five homes in addition to other structures 20 miles south of Wenatchee. (AP Photo/The Seattle Times, Steve Ringman)

The fire danger remains high through Thursday with the threat of lightning strikes from thunderstorms.