It has been 100 years since water flowed in this now former farmland along Ebey Slough. The place is unrecognizable from what it was just four months ago.

“A lot of things are going to change really fast in here,” said Todd Zackey, as he and a team of researchers from the Tulalip Tribes navigated the waters Monday.

In August, the Tulalip, along NOAA and Snohomish County breached a levee along the slough, flooding the land and returning its natural state.

Now, researchers are casting nets into the water to see what fish are showing up. The goal is to create a salmon spawning habitat to help in increase their numbers around Puget Sound. 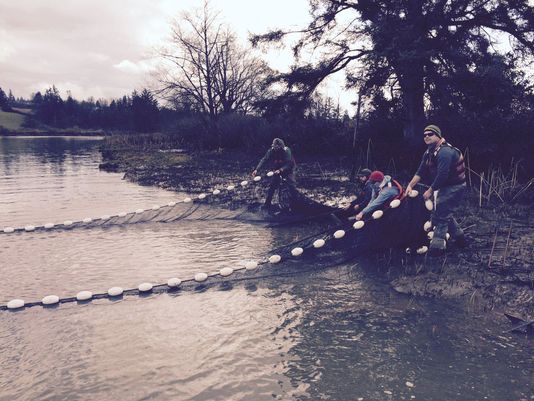 Researchers are casting nets into the Ebey Slough to see what fish are showing up.
(Photo: Eric Wilkinson / KING)

Right now, though, there are far more questions than answers.

“Can we punch a hole in the dike and have the salmon respond in a positive way?” asked researcher Matt Pouley. “Are we going to see a population response over a reasonable amount of time?”

So far only a few salmon have been spotted, but that’s to be expected for this time of the year. There are plenty of other fish, though, and that’s a good sign.

No one is in a hurry. This is a long term project. It will likely take a century for full restoration of these waters.

And this project is about more than strengthening the fish supply. It’s about a way of life that goes back thousands of years for the Tulalip, and preserving that tradition for generations to come.

“The tribe is, in essence, losing part of its culture,” said Zackey. “Restoring salmon is restoring the culture of the tribe.”

MARYSVILLE — Unless it’s raining hard, the Highway 529 bridge into Marysville is set to close tonight and is scheduled to remain closed through the weekend.

People who drive the bridge over Ebey Slough will have to choose a different route from 8 tonight through 5 a.m. Monday. The weekend detour uses Fourth Street in Marysville and I-5. Bicyclists and pedestrians can be escorted through the closure if needed.

For the past year, demolition crews have used half of the new bridge as a staging area to rip down the old Ebey Slough bridge.

With the removal of the old bridge, drivers will finally be able to use all of the new, wider bridge after this last bit of work.

State Department of Transportation crews plan to remove the concrete barrier between drivers and the demolition staging area. Once the barrier is gone, the roadway will be striped for traffic in each direction. The bridge will reopen by Monday with four lanes for vehicle traffic and bike lanes on each side.

Transportation engineer Mark Sawyer anticipates that it will be a big change for drivers who use the bridge to commute and ease traffic during the evening commute from Everett.

When the weather improves in May, a final layer of asphalt will be applied.

The state built the new bridge to replace the 85-year-old Ebey Slough bridge.

For details, graphics and photos, go to www.wsdot.wa.gov/projects/sr529/ebeysloughbridge.