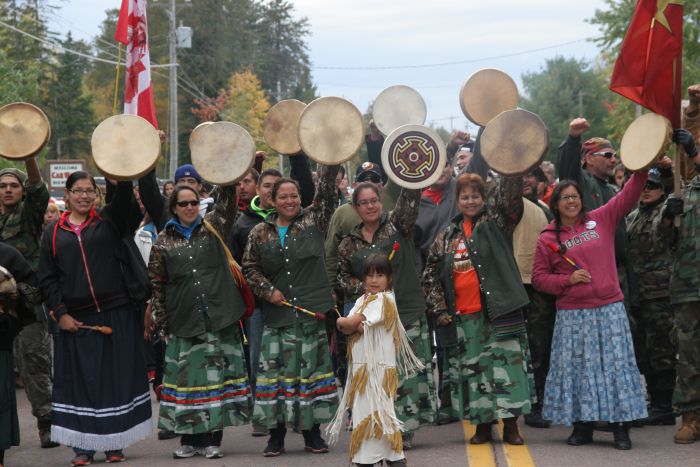 A Royal Proclamation day feast brought out over 300 to the anti-fracking blockade in Rexton, New Brunswick in early October. [Photo: Miles Howe]

Elsipogtog First Nations members are heading back to the streets in New Brunswick this week to defend their land from a gas drilling company seeking to re-start exploratory fracking operations in the region.

The new wave of local anti-drilling resistance will resume an ongoing battle between the community members who faced a paramilitary-style onslaught by police last month that sparked international outcry and a wave of solidarity protests.

“This is an issue of human rights and access to clean drinking water, and it’s fundamentally about sovereignty and self-determination.” –Clayton Thomas-Muller, Idle No More

The renewed protest follows a recent announcement by New Brunswick’s premiere that SWN Resources Canada, a subsidiary of the Houston-based Southwestern Energy Company, will resume shale gas exploration in First Nations territory after it was halted by blockades and protests.

Elsipogtog members announced Monday they will join with local residents and other First Nations communities—including the Mi’kmaq people—to “light a sacred fire” and stage a protest to stop SWN from fracking.

“SWN is violating our treaty rights. We are here to save our water and land, and to protect our animals and people. There will be no fracking at all,” said Louis Jerome, a Mi’kmaq sun dancer, in a statement. “We are putting a sacred fire here, and it must be respected. We are still here, and we’re not backing down.”

“The people of Elsipogtog along with local people have a very strong resolve and will be there as long as they need to be to keep the threat of fracking from destroying their water,” said Clayton Thomas-Muller, a campaigner with Idle No More, in an interview with Common Dreams.

Community members  previously blocked a road near the town of Rexton in rural New Brunswick to stop energy companies from conducting shale gas exploration on their land without their consent.

In early October, the government imposed a temporary injunction on the New Brunswick protest, bowing to pressure from SWN.

Claiming the authority of the injunction, over 100 Royal Canadian Mounted Police launched a paramilitary-style assault on the blockade in late October, bringing rifles and attack dogs and arresting 40 people.

First Nations communities and activists across Canada and the world launched a wave of actions in solidarity in response to the attack.

“Within 24 hours of the paramilitary assault on the nonviolent blockade by the fed police, Idle No More and other networks organized over 100 solidarity actions in over half a dozen countries,” said Thomas-Muller.

Days later, a Canadian judge overruled the injunction on the protests. Yet the federal and provincial governments continue to allow SWN to move forward fracking plans on indigenous lands, in what First Nation campaigners say is a violation of federal laws protecting the sovereignty of their communities.

“This is an issue of human rights and access to clean drinking water, and it’s fundamentally about sovereignty and self-determination,” said Thomas-Muller. “Support for the Elsipogtog and their actions to reclaim lands in their territory is something that is powerful and united from coast to coast and around the world.”