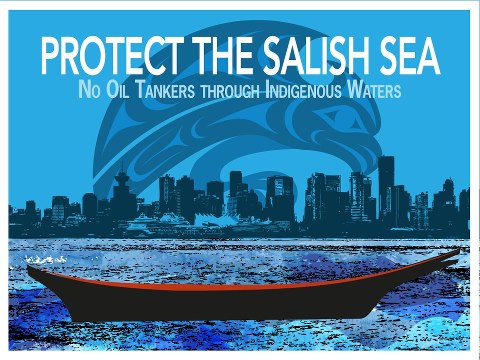 The Lummi, Swinomish, Suquamish and Tulalip tribes of Washington, and the Tsleil-Waututh, Squamish and Musqueam Nations in British Columbia stand together to protect the Salish Sea. Our Coast Salish governments will not sit idle while Kinder Morgan’s proposed TransMountain Pipeline, and other energy-expansion and export projects, pose a threat to the environmental integrity of our sacred homelands and waters, our treaty and aboriginal rights, and our cultures and life ways.

The Salish Sea is one of the world’s largest and unique marine water inland seas. It is home to the aboriginal and treaty tribes of the Northwest whose shared ecosystem includes Washington State’s Puget Sound, the Strait of Juan de Fuca, the San Juan Islands, British Columbia’s Gulf Islands and the Strait of Georgia.

In December 2013, Kinder Morgan, the third largest energy producer in North America, filed an application with the National Energy Board (“NEB”) of Canada to build a new pipeline to transport additional crude oil from the tar sands of Alberta to Vancouver, B.C., where it will be put on tanker vessels and shipped to Asia. The NEB is the Canadian federal agency that regulates energy.

If approved, the proposal would result in expanded transport of crude oil from approximately 300,000 to 890,000 barrels per day. This is a 200 percent increase in oil tanker traffic through the waters of the Salish Sea. Vessel groundings, accidents, leaks, and oil spills are not only possible, they are inevitable.

New jobs and economic growth are being touted as incentives to justify the expansion of the Northwest as the “gateway to the Pacific.” But good fishing and tourism jobs will be lost that depend on a healthy and intact environment. If these projects are approved, the potentially catastrophic effects to our environment and cultural resources will put our Northwest way of life in jeopardy.

In addition to the Kinder Morgan proposal, other port projects and expansions seek to increase the cumulative export of raw fossil fuels from the Salish Sea region to the Asian Pacific and beyond.

As the first peoples of the Salish Sea, it is our responsibility to ensure that our ancestral fishing and harvesting grounds are not reduced to a glorified highway for industry. Each of these proposals represents a potential new threat to our treaty rights in the traditional fishing areas of the Coast Salish tribes and nations. These are rights that the United States promised to protect when they signed treaties with the tribes, recognizing our inherent right to fish “at usual and accustomed grounds and stations.” (1855 Treaty of Point Elliott, Article 5.)

Our relatives to the east, on the sacred Columbia River, are fighting similar battles against dirty fuel projects that threaten to pollute their lands and waters. The Nez Perce stand firm on ensuring that this unique area of the country and tribal homelands are not transformed into a “mega-load” industrial corridor.

Other Columbia River tribes, including the Yakama, Umatilla, and Warm Springs all stand with the Nez Perce to fight for their traditional fishing grounds on the Columbia River and its tributaries. Multiple energy export proposals, up and down the river, threaten to choke the very life from a once bountiful traditional fishing ground. Coast Salish tribes link arms with their cousins along the Columbia.

On February 11, 2014, the undersigned tribes and nations collectively filed for official intervener status in the National Energy Board (NEB) of Canada’s hearing process that decides whether or not to approve Kinder Morgan’s application. This will allow us to present our story, offer evidence and studies documenting impacts on our way of life, and ask important questions during the hearings to ensure the panel receives all the information needed to make an informed decision.

The Coast Salish will fight for our treaty rights, our culture, and our way of life. If protecting our homelands and cultures means standing up against Kinder Morgan’s TransMountain Pipeline, and other proposals that endanger our region, we will most certainly do so. It is our sacred duty to leave future generations a healthy world.

If our children and our children’s children are to know the taste of wild salmon, and the ancient calling of the Salish Sea, we must stand up. The Coast Salish peoples have a saying, “from white caps to white caps,” which means from the snowy peaks of our mountains to the foam-capped waves of our seas, this is our world.

We issue a call to all Native Americans, First Nations relatives, and to all people who love the Salish Sea to please stand with us to protect our rights, our health, and our children’s future. It is our generation’s time to stand up and fight. What happens to the Salish Sea happens to our peoples, and to all those who call this unique place home.

We urge you to share your objections to Kinder Morgan’s pipeline with President Barack Obama and Governor Jay Inslee before a decision is made by writing and calling:

Office of the Governor