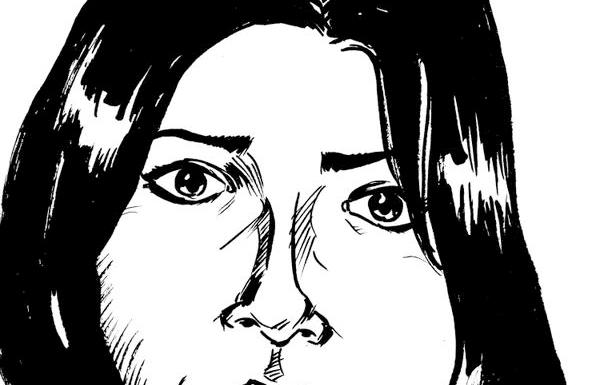 Toronto-based cartoonist and illustrator Evan Munday is applying his talents to a campaign to raise consciousness about Canada’s missing or murdered Indigenous women (often referred to as MMIW). Actually, the consciousness he’s interested in raising is that of a specific person: Canadian Prime Minister Stephen Harper. Munday has pledged to tweet one portrait of a missing or murdered woman to Harper every day. Here’s how his announcement unfolded on his @idontlikemundayTwitter feed:

Over 1186 indigenous women have gone missing / been murdered in Canada since 1980. There have been outcries for public inquiry. #MMIW (1/3)

Our PM said an inquiry into the missing women ‘isn’t really high on our radar.’ So I’m trying a small thing to make it higher. #MMIW (2/3)

Starting on Jan 5, I’ll tweet @pmharperan illustration of a missing or murdered indigenous woman daily. To adjust his radar. #MMIW (3/3)

Earlier today, as promised, he sent out his first portrait, with the text:

@pmharperElaine Frieda Alook was 35 when she disappeared on May 11 outside Fort McMurray, Alberta. #MMIW

‘Elaine Frieda Alook was 35 when she disappeared on May 11 outside Fort McMurray, Alberta,’ writes artist Evan Munday. Portrait by Evan Munday.

This endeavor, which could conceivably go on for over three years, bears some resemblance to a project Munday tweeted in December and has archived on his blog as “December 6, 1989: in Illustrations,”a tribute to the 14 women killed at Montreal’s Ecole Polytechnique 25 years ago.