about the development of an electric car in America and stay for a post-film discussion with EvCC Resource Conservation Manager Molly Beeman.

speaks on organic gardening and answers your questions.  1:00pm to 2:00pm in the Gray Wolf Hall Courtyard.  Free and open to the public.

Plant Swap
Get all the green you want for free at the annual EvCC plant swap! Students and employees can donate plants and seeds April 24th.  Want to drop off your plants early in the AM?  You can bring them to Maintenance (the building behind Glacier Hall) from 7am to 9am on April 24th.   Want some new vegitation?   Pick up plants and share what you’ve got  between Parks Building and Graywolf Hall (in the Courtyard) From 9:30am-12:30pm or until they’re gone. (You don’t have to donate anything to take a plant home.)  Free and open to the public. 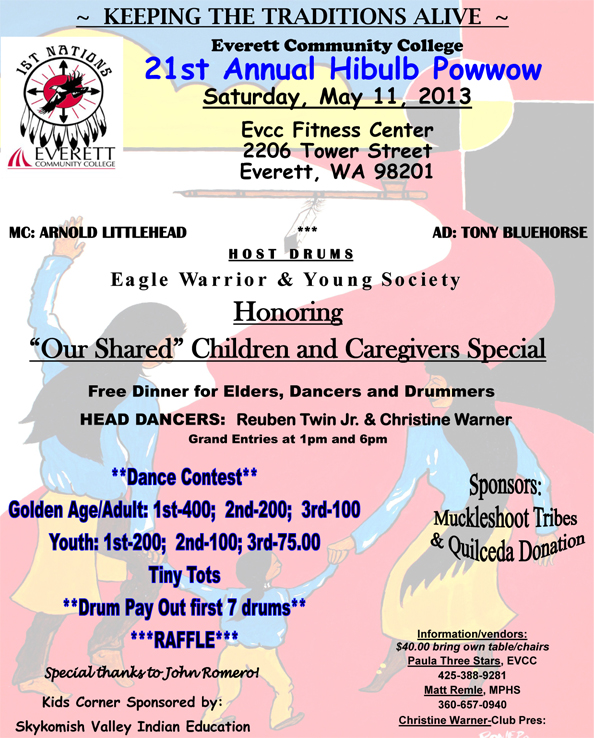 Nursing students at Everett Community College better be on their toes in their new Liberty Hall digs, a $37.5 million building that opened Monday.

They get training on how to respond to patients having heart attacks, strokes and delivering a baby.

The simulation mannequins the nursing students practice on, a man, pregnant woman and infant, cost a total of about $155,000.

The mannequins have features so sophisticated that they can register how much oxygen is being administered, detect when the wrong drug or wrong dose of a drug has been given and simulate the health problems it would trigger.

“Until you solve it, they get worse,” said Gail McLean, a nursing instructor.

The practice sessions can be videotaped so that students can learn from the simulation drills or they can be provided as a “live feed” to other students.

“We like to run them through a scenario,” McLean said. “Sometimes they make mistakes or think of other ways to do things. We run them through that same exact scenario and they get to do it correctly. When they leave here they know how to do it right.”

The simulation lab is just one part of the 72,000-square-foot building where about 500 students take classes each day.

The three-story building also houses a phlebotomy lab, where students are trained to draw blood samples.

Lecture rooms with a document camera can project images of tiny pieces of equipment onto a nearby screen so that all students can clearly see what’s being discussed.

The building will be the new home later this year for Providence Everett Healthcare Clinic, now located across the street at 1001 N. Broadway. The clinic is open to anyone but targets uninsured, low-income and Medicare patients.

Planning for the new building began about three years ago and its construction spanned 15 months, said Elliot Stern, interim dean for health sciences and public safety.

A public open house will be scheduled in June.

The new brick building, which borders North Broadway, replaces two buildings that opened on the campus in 1968, Index and Liberty, which later expanded to four buildings and was later named Index Hall.

Liberty Hall is named after a mountain in the Cascade Range near Three Fingers Mountain.

In the past seven years, Everett Community College has completed almost $150 million in construction projects. They include:

•Liberty Hall: The $37.5 million, 72,000-square-foot building is home to the college’s nursing, medical assisting and phlebotomy programs and other health sciences training, plus the college’s criminal justice program. It also will be the new home of Providence Everett Healthcare Clinic, now located across Broadway. Opened Monday.

Corporate & Continuing Education Center: A $4 million renovation of the interior of the two-story structure, including an expansion to 12 classrooms, four technology classrooms, a conference room, student lounge and a meeting area for up to 100 people. The center provides professional development and career training for individuals and training for employers. Finished in December.

Henry M. Jackson Conference Center: A $3.3 million renovation that moved the college’s Enrollment Services and Cashiers Office to the Parks Student Union and remodeled the building for use as a conference and meeting space. Finished in May.

Parks Student Union, May 2011: A $5.3 million remodel and expansion that added 5,600 square feet, including a new cafe, remodeled the Russell Day Gallery and provided more study space for students. It was funded in part by student fees. Finished May 2011.

Fitness Center: The $19.5 million, 49,000-square-foot fitness center includes classrooms for physical education and health programs, a gym with retractable bleacher seating for 2,250, a cardio and free-weight training room, a climbing wall, running track, a multipurpose small gym and offices for faculty and staff. The center replaced the college’s 1958 gym. The building was funded in part through student fees and money from the sale of the college’s old gym to Providence Regional Medical Center Everett. Finished in January 2011.

Gray Wolf Hall: The 77,000-square-foot, $49 million building is home to classes in the humanities, social sciences and communications and the University Center of North Puget Sound, which offers more than 25 bachelor’s and master’s degree programs from eight colleges and universities. Opened in March 2009.

Whitehorse Hall: The 88,000-square-foot building is home to the college’s visual arts, physical sciences and journalism classes. The $27 million building was the first of four new buildings added to the Tower Street campus, which opened in 1958. Finished in January 2007.

The March 26 and April 16 information sessions are at 6 p.m. at EvCC’s Henry M. Jackson Center Auditorium, 2000 Tower St. in Everett.

College staff will discuss how to apply, options for full and part-time enrollment, student life and special program options, such as the Ocean Research College Academy (ORCA) program on the Everett waterfront that emphasizes local marine research.

Running Start is a partnership program between colleges and high schools. The program is available to eligible high school juniors and seniors. Students can apply college credit to their high school graduation requirements. Tuition is free for up to 15 credits per quarter.

ORCA is an early college academy for high school students, who can earn up to two years of college credit for free while completing their high school education. Most students graduate with an associate’s degree in addition to a high school diploma.

In addition to attending one of these sessions, EvCC encourages students to contact their high school counselors.

The priority deadline to apply for Running Start at Everett Community College for Fall quarter 2013 is May 1. EvCC serves more than 900 high school students through Running Start.

For more information about Running Start or other EvCC programs, contact EvCC’s High School Relations Office at highschoolrelations@everettcc.edu or 425-388-9073.