An artist’s rendering of what the new hotel at the Angel of the Winds Casino will look like, once it’s complete in 2015.
— image credit: Courtesy image.

“This is the next step in our growth of the Angel of the Winds Casino,” said Koran Andrews, CEO of the Stillaguamish Tribal Enterprise Corporation. “We continue to look at what our guests want, and develop those amenities.”

“We are truly blessed to have an opportunity to add a hotel to our facility, and provide more services to our guests,” Stillaguamish Tribal Chair Shawn Yanity said of the expansion, which will add more than 100,000 square feet to the casino, in the form of not only a new hotel, but also a new gift shop and smoke shop, as well as a porte-cochere to centralize guests’ entrances to the property. “Not only are we growing our tribal economy, but we’re growing the local economy, too, by increasing job opportunities and tourism.”

According to Travis O’Neil, general manager of the Angel of the Winds Casino, planning for the new hotel expansion began roughly 18 months ago, but the possibility of such an expansion was factored into the casino’s plans shortly before its previous expansion six years ago.

“We’ve got a master plan, but we also listen to our guests,” O’Neil said. “We blocked out the space for this sort of expansion, because we always had in mind that the Angel of the Winds Casino would become a destination resort. We might as well reach for the stars. We’ve got a good group of people, who do their best for our guests, and the Stillaguamish Tribe has been willing to support us, so long as they see our accomplishments.”

As far as O’Neil is aware, the Angel of the Winds Casino is one of the last, if not the last, casino on the I-5 corridor to add its own hotel, and he touted the new hotel — which is anticipated to open in the winter or spring of 2015, creating an estimated additional 50 jobs for the local community in the process — as “moderately priced, but not lower-end.”

“The hotel will be just as comfortable and nice as they’ve come to expect from the casino,” O’Neil said. “It promises to be a very good complement to the World’s Friendliest Casino.”

“We’ve got other steps in our master plan, but it would be premature to discuss those at this point,” O’Neil said. “For right now, we just want to focus on making this hotel a success, and I just want to thank the Stillaguamish Tribe for the opportunities they’ve given me in this job. Their elders paved the way for this, and they’re supporting it because they’re mindful of leaving something to their future generations. It’s been a blessing to work with them.”

The Angel of the Winds Casino is located three minutes east of I-5 Exit 210 in Arlington.

More than a dozen new stores to be added in Tulalip 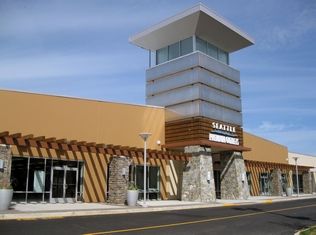 M.L. Dehm / For The Herald Business Journal
The expansion to the Seattle Premium Outlets was designed to ensure a new promenade would meld with the original 2005 structures.

TULALIP — Several retailers in the Seattle Premium Outlets‘ new promenade expansion are scheduled to open for business on June 20, with additional retailers following in the coming months.

The project is anticipated to bring more visitors to a complex that already draws more than 6.5 million annually.

“We are excited to welcome wonderful brands and stores that have proven to be so popular in other centers of ours,” said Mark Johnson, general manager of Seattle Premium Outlets.

He anticipates that the addition of those stores will satisfy shoppers’ demands for greater selection, more brands and the chance to find more deals.

The expansion added more than 100,000 square feet of retail space to the approximately 400,000 existing square feet that opened near Quil Ceda Village and the Tulalip Resort Casino in 2005. A parking garage opened in 2012 on the east side of the mall.

“Being next to the Tulalip Resort and Casino is a great complement to our shopping options and a benefit to area visitors,” Johnson said.

Tourists spent about $876 million in Snohomish County last year, and being near other tourist destinations is a bonus for Seattle Premium Outlets as it tries to capture tourist dollars.

Simon Property Group, the S&P 100 company that owns the complex, stated that the property was producing sales in excess of $700 per square foot before the start of the expansion.

Last quarter, the company posted a 5.3 percent increase in tenant sales per square foot overall in its family of outlet malls.

Simon Property Group owns 77 outlet malls worldwide, including 63 of the fewer than 200 facilities in the United States. That makes the organization one of the largest outlet mall groups in the world. The company holds a long-term lease on the Seattle Premium Outlets’ land owned by the Tulalip Tribes.

There were always tentative plans for a possible expansion of the Seattle Premium Outlets that preceded the official opening in 2005. However, the current expansion wasn’t actually announced until August 2011 and work did not begin until 2012.

“Our growth began with the completion of the new parking garage in late 2012 and continues with the opening of the promenade,” Johnson said.

The parking garage compensates for the areas of parking that were lost with construction on the expansion. During the last holiday season when expansion construction was in full swing, the outlets made a point of letting shoppers know that the parking garage was available and that stores were open for business.

According to Johnson, the parking garage has been working out well since it opened. Some shoppers seek out the lower, sheltered level of the garage in inclement weather.

The soon-to-open expansion, which is the new face of the facility as seen from I-5, has been built to complement the original site both in appearance and convenience. Director of marketing Michele Osgood pointed out the way in which similar structures and materials were used to offer a seamless feel to shoppers coming to the Outlets.

A new visitor would probably not notice the subtle differences between the new promenade expansion and the original buildings. Both areas feature wood elements and rock facings. Colors and landscaping are similar and the hardscape under foot at the entrance is the same.

Benches have been added at intervals along the front of the structure and secure locker rentals are available outside the management office at the northwest corner of the facility so shoppers don’t have to go all the way back to their car to stow purchases.

Many of the shoppers who visit the outlets come from Canada. They stay at one of the hotels, such as the Tulalip Resort Casino, or make the visit a day trip from Vancouver, B.C.

“The center serves area residents, both locally and regionally, and area visitors from all over the world,” Johnson said. “Our goal is to meet the needs of a wide range of shoppers.”

The more than a dozen shops opening on June 20 should help to do that. There are no plans for further expansion of the property, Johnson said.

Monday, June 3 will mark the ceremonial blessing and groundbreaking of Suquamish Clearwater Casino Resort to kick-off the first phase in a five-year major expansion plan that will ultimately include a convention center,  100 new hotel rooms, a fifth  restaurant, and extensive remodeling of the Clearwater Casino. The groundbreaking will initiate construction of a six-level, 690-space parking garage, with a projected completion date of January 21, 2014.

“We are pleased to launch this first phase in a highly anticipated Master Plan that will draw businesses and organizations from around the Puget Sound to North Kitsap for conventions and corporate retreats,” says Steele, “and create another 180 jobs at the casino resort over the next 4 years. The casino will remain open for business as usual during construction, with guest parking moved to the existing parking garage.”

In addition to the new garage, Phase 1 will add 10,000 square feet of new meeting space and a 4,500 square foot pre-function area to the casino, additional office space, a new walkway between the resort and the casino, a fine dining restaurant, and the Longhouse Buffet will be remodeled. The projected completion date for Phase 1 is November 2014.

Phase II, set to begin in October 2014, will encompass the construction of a 100-room, five-story hotel adjoining the casino. All rooms will have water views and will be structured to accommodate a potential additional three stories in the future. Phase 11 is projected to be complete by end of March 2015.

Extensive remodeling resulting in a 5,700 square foot expansion of the casino will take place in Phase 111. A new 350-seat lounge, a specialty restaurant and a new bar in the center of the casino floor are part of an updated look that is projected to be completed by November 2016.

Phase IV, the final stage in the 5-year Master Plan, will be construction of the Convention Center. The project will add 15,000 square feet of meeting and entertainment space to the casino with moveable walls, along with 11, 500 square feet of pre-function space and 8,500 feet of support space. Completion is anticipated at a later date.