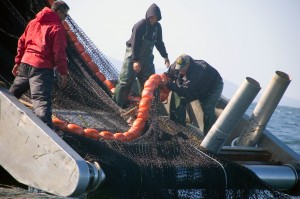 Lummi tribal fishermen prepare a purse seine during the 2011 Fraser sockeye fishery. The tribe has declared 2013 a fisheries economic disaster after poor returns canceled this year’s fishery worth $1.3 million.

The Lummi Nation is seeking federal disaster relief for its fishing fleet following another year of poor returns of Fraser River sockeye salmon.

Despite a bountiful run in 2010, Fraser River sockeye returns have been declining for 30 years. The U.S. Department of Commerce declared it a fisheries economic disaster in 2002, 2007 and 2008.

There was no commercial Fraser sockeye in 2013. “Our traditional ties to the sockeye are irreplaceable,” said Elden Hillaire, chairman of the Lummi Fisheries Commission. “The lack of harvest interferes with our schelangen (way of life).”

Without a fishery, Lummi tribal fishermen missed out on a potential catch worth $1.3 million. In part, a declaration of a fisheries disaster would provide services and financial assistance to tribal fishermen who are trying to adapt to a changing industry.

After the 2008 declaration, the tribe received a U.S. Department of Labor grant to create a program called Lummi Fishers, which helps fishermen find training and other careers so they can make ends meet when they can’t fish.

Poor ocean conditions, shifting currents and climate change are blamed as potential causes for the Fraser run’s decline. Temperatures in the Fraser River in 2013 were the highest ever recorded; high  enough to be lethal to the salmon.